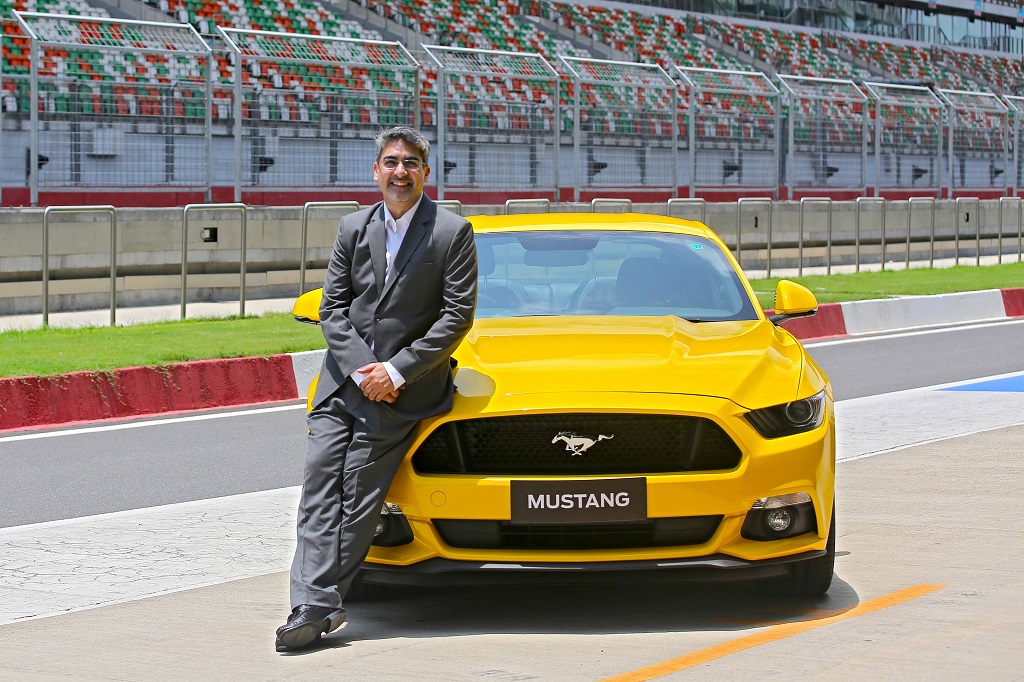 For the first time in its 52-year history, Ford’s iconic Mustang is ready for Indian roads.

Having stirred the imagination of millions of Indians with its first appearance at Delhi Auto Show earlier this year, Ford is now giving customers an opportunity to own the legendary Mustang at INR 65 Lakh (Ex-Showroom, Delhi).

As the latest addition to Ford’s youngest and most vibrant vehicle portfolio in India, the new Mustang will be equipped with a 5.0L V8 petrol engine, churning out a massive 401 PS* of peak power, to appeal to the enthusiasts.

“In our commitment to building a drive for everyone, there’s never been a better time at Ford to introduce this iconic car and offer the youngest ever product line-up to customers in India,” said Anurag Mehrotra, executive director, Marketing, Sales & Service, Ford India.

“Mustang is more than just a car. It gives you the freedom to express and epitomizes the passion and fun-of-driving inherent in all Ford vehicles. The arrival of the Mustang will shine a bright light on the blue oval along with the rest of the Ford range and will help us demonstrate our potential.”

In its first year of global availability including in RHD markets, Ford Mustang became the world’s best-selling sports coupe. According to registration data from IHS Automotive, Ford sold around 110,000 Mustang Coupes globally in 2015 – topping all other competitors.

Ford will bring Mustang for customers in India as a CBU from Flat Rock Assembly Plant in the United States.

“The way Mustang looks, drives and sounds is key to the visceral experience that makes drivers just want to get in the driver’s seat and hit the road. The new Mustang is modern, technologically advanced and forward-looking, without forgetting the heritage that has inspired customers for generations,” said Mehrotra

The Ford Mustang will go on sale in Delhi and Mumbai in the first phase.

There’s a certain feeling you get when you start the engine and hear Mustang’s iconic growl for the first time. Mustang’s design is just as thrilling.

The clean-sheet design of the new Ford Mustang evokes the essential character of the brand, retaining key design elements – including the long sculpted bonnet and short rear deck – with contemporary execution.

Several key design features that define the new Mustang include:

Look inside and the drivers will find information and controls readily accessible in the aviation-inspired cockpit, which is executed with the highest degree of craftsmanship ever. A large, high-definition display screen puts vehicle information right in front of the driver with tactile switches & knobs improving ergonomics and providing better control.

Not to miss, the Six-way power-adjustable leather-trimmed driver and front passenger seats in Ford Mustang are heated and cooled. The added width and a new rear suspension in the new Mustang contribute to improved packaging and shoulder and hip room for rear-seat passengers, and a more usefully shaped boot that can accommodate two golf bags.

To win over the enthusiast in you, Ford has armed Mustang with its latest edition of the throaty 5.0-litre V8 engine, featuring an upgraded valvetrain and cylinder heads, delivering a peak power of 401** PS with 515 Nm of torque with a top speed of 250km/h.

Getting air into the cylinders and exhaust out is key to generating more power and torque from any engine. A new intake manifold, introduced on new Mustang, improves low-speed breathing for better fuel economy, idle stability, and emissions with –

With new fully independent front and rear suspension systems, the Ford Mustang is expected to be the nimblest and most comfortable to date.

At the front, a new perimeter sub – frame helps to stiffen the structure while reducing mass, providing a better foundation for more predictable wheel control that benefits handling, steering, and ride.

When the road becomes demanding, the new Mustang sets handling benchmarks for the brand, delivering world-class dynamics and ride quality.

At the rear is an all-new integral-link independent rear suspension. The geometry, springs, dampers and bushings all have been specifically modified and tuned for this high-performance application. New aluminium rear knuckles help reduce un-sprung mass for improved ride and handling.

For the hard core enthusiasts, the new Ford Mustang will have an electronic line-lock – which automatically locks the front brakes and releases the rears so you can spin and heat up the rear tyres like a true drag racer to help the car launch.

With an ability to tap the toggle switches on the console to quickly adjust steering effort, engine response, and transmission and electronic stability control settings, the new Mustang allows to choose from four available Selectable Drive Modes – each setting activating predefined powertrain and chassis calibrations suited to that particular driving situation:

Innovative Tech, Smartest Mustang The new Mustang features a significant amount of innovative technologies providing drivers with enhanced information, control, and connectivity when they want it.

From Smart Keyless Entry with Push Button Start to SYNC2 and MyKey in every Mustang built, plus standard Track Apps™, drivers will be able to customise their time behind the wheel. The feeling of freedom and confidence Mustang instills in its drivers is amplified when they can take control of how the car behaves.

Along with the widespread use of high-strength steels in its construction, some key features that keep drivers safe in Mustang include:

Over Five Generations of Mustang April 17, 2014, marked the 50th anniversary of the introduction of the original Ford Mustang and each Mustang model celebrates the milestone with a badge on the instrument panel that includes the galloping pony logo and the words “Mustang – Since 1964”.

Carrying forward Henry Ford’s legacy of making lives better for communities, 14,000 Ford India employees will apply their skills and energy towards creating a Better World. Ford employees will participate in  more than 47 community […]