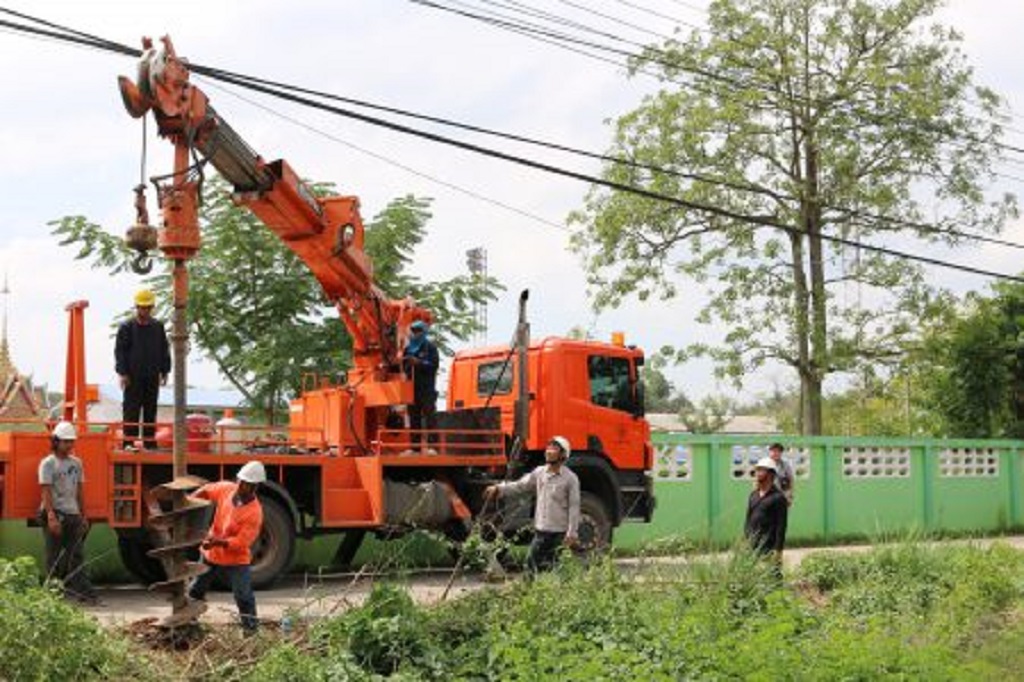 When the electric power distribution for Wat Ang Thong in Samut Sakhon needed an upgrade, the Provincial Electricity Authority sent one of their new mobile units. Within a couple of hours deep holes were drilled and new power poles in place.

In many of the 74 provinces outside Thailand’s capital Bangkok, rapid growth has generated the need for a new type of heavy construction vehicles. Equipped with both a crane and a drill, these Scania trucks can repair and exchange electricity poles and wires in both harsh mountain areas and along dirt roads during the rainy period.

In a short time, Scania´s distributor in Thailand, Scania Siam, has sold 63 such chassis for bodybuilding and equipping by Tirathai E & S.

The need for these trucks is huge in many parts of Thailand. In order to maintain and expand the existing electricity network, estimates indicate up to 400 of these vehicles are needed.

To maintain and expand the existing electricity network in rural Thailand, 400 of the new trucks are needed.

“It is an entirely new segment, where the customers prefer Scania,” says Thanyarat Worakulphisit, Sales Executive for trucks at Scania Siam.

In a country where you sometimes get the feeling that each and every one of the 70 million inhabitants has its own power line, the need for new electricity infrastructure never ends.

The Provincial Electricity Authority (PEA) distributes electricity to the public and companies throughout Thailand’s more rural areas. On a narrow concrete road between the Wat Ang Thong School and an orchid farm, one of PEA’s new special vehicles operates. Old, crumbling and overgrown concrete poles are quickly lifted by the mobile crane and transported away, while the drill is extended out and begins churning up dirt.

Each new hole take between five and ten minutes to install, and already before lunch the entire stretch of road outside the school has received new poles with wires and a transformer, ensuring that the school’s electricity needs are met and a more stable electricity in the area around Wat Ang Thong.

Thitipon Aupakeaw, who supervises the PEA crew installing the new infrastructure, confirms that he and his team prefer to work with Scania vehicles.

“It’s all about the vehicles’ reliability and engine power. Sometimes we have to operate in very hilly areas. Then we need the powerful engines and braking systems from Scania.

The conditions can vary a great deal. And once the drill is in the ground everything goes so much faster, thanks to the powerful engines,” he says.

“I trust in Scania for working everywhere.”

Norway Post Bring has purchased 130 Scania trucks for delivery until March 2017. It currently operates 950 trucks in Norway and is in the process of modernising its fleet. “It’s important for us to have […]

For the past two weeks, Scania’s Demo Centre in Södertälje has been like a meeting of the European Parliament, as journalists from all over the continent have been bussed in to test drive the New […]

One Scania truck’s epic journey to become road-ready for a special job.

Potholes can put huge strain on a vehicle’s tyres, suspension and shock absorbers, and they can sometimes cause accidents. But the holes are expensive to fix, and repairing them often involves shutting down stretches of […]