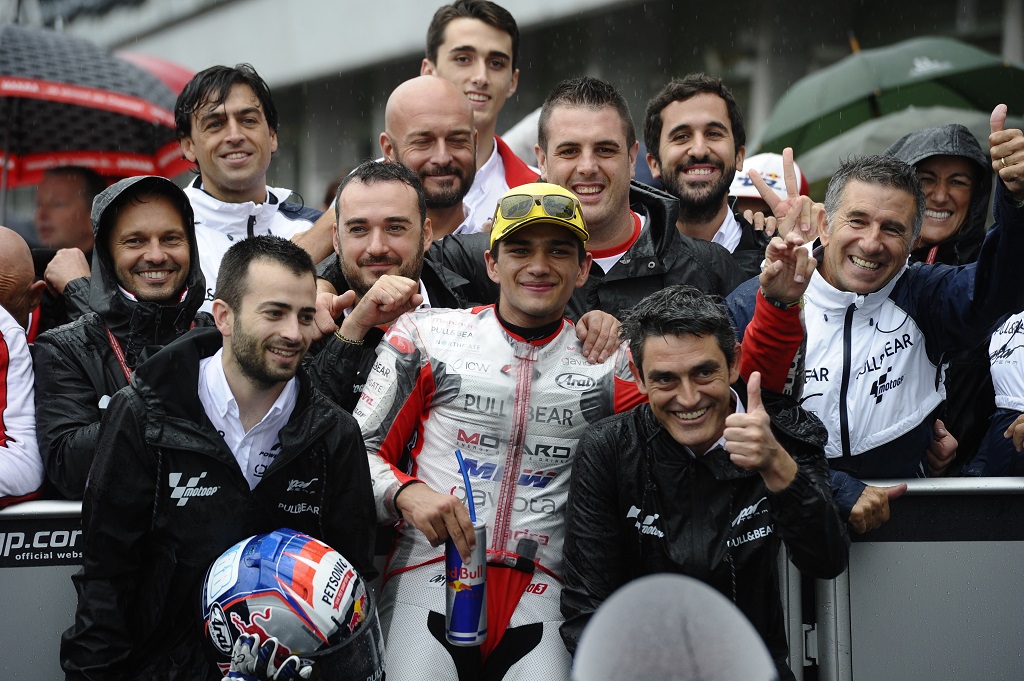 The only Indian constructor in World Championship racing made more history at Brno today, when the Mahindra MGP3O Moto3 machine took first and second places in a rain-soaked Czech Republic Grand Prix. 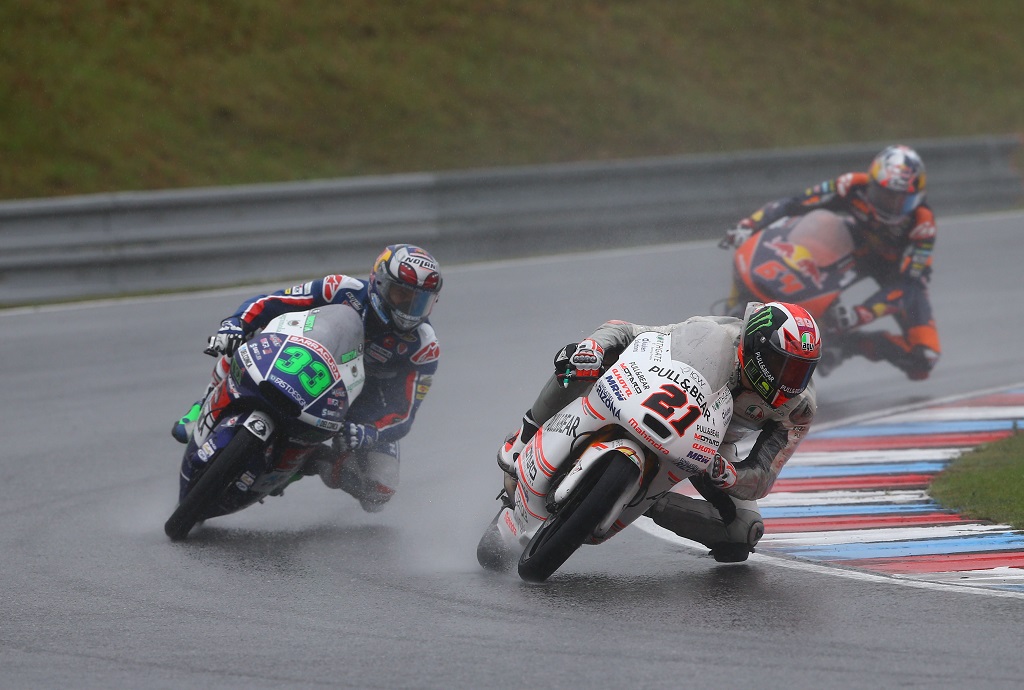 The winner was Scotsman John McPhee, splashing through the spray to take his own first GP victory and a first for the new-this-year Peugeot MGP3O, sister brand to Mahindra. He was over eight seconds clear at the flag.

The MGP3O’s double comes just three races after the marque’s historic first win in the Dutch TT at Assen. The rider in that dry race was Aspar Mahindra Team’s Pecco Bagnaia, and it was the 19-year-old Italian’s fourth time on the top-three podium in Mahindra’s best year so far. 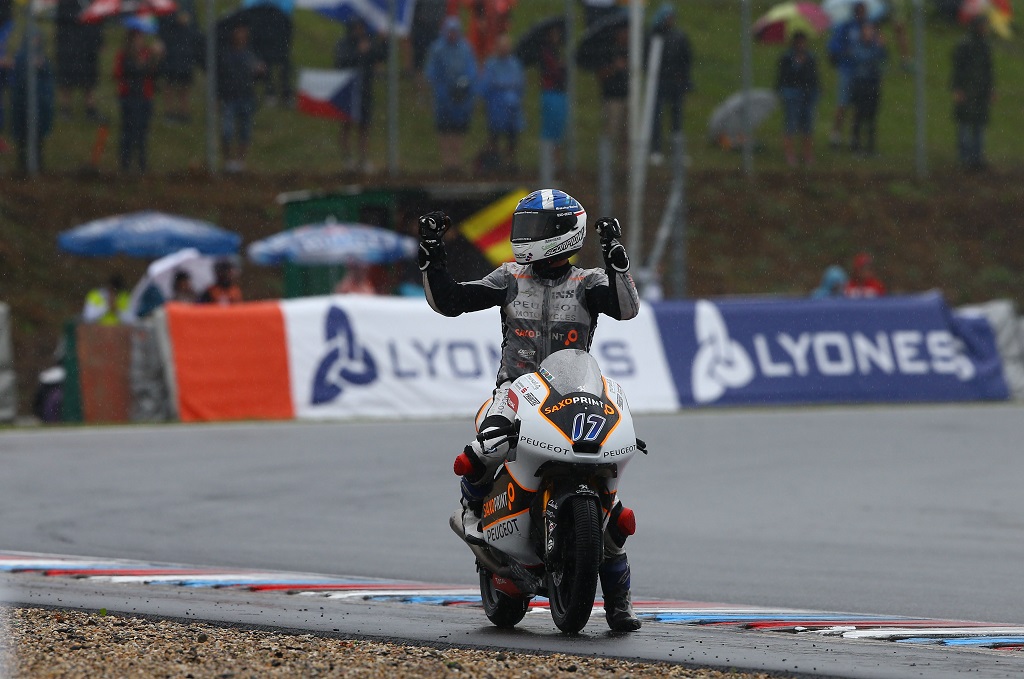 Bagnaia was one of many to crash out of today’s race, hampered by tyre problems that meant he had to push over the limit to try to stay in a points-scoring position.

After two days of sunshine in practice and qualifying, race day was sodden, with steady rain keeping the majestic 5.403-km circuit streaming wet, and sending several fancied riders slithering off into the gravel.

One was long-time race leader and championship favourite Brad Binder (KTM), who succumbed to relentless pressure from McPhee, the first Scotsman to win a motorcycle grand prix since Bob McIntyre in 1962.

McPhee was then alone up front, but in a heart-stopping moment on the third-last of the 19-lap race, his bike slid sideways and threatened to throw him off. He was able to regain control thanks to extensive development work on Mahindra’s electronic traction-control system.

Martin (18) had started from the front row for the first time, after qualifying fourth then getting moved up because of another rider’s penalty. The white-liveried Mahindra led off the line and was a second clear by the end of the first lap.

Only on lap six did Binder take over the lead, and marvellous Martin stayed with the lead group of four, awaiting developments on the treacherous surface.

As the 19-lap race wore on, he had to resist a fierce and prolonged attack from third-placed Fabio Di Giannantonio (Honda), who finally dropped away by almost a second at the flag.

A one-two finish had been the next target for the maturing Mahindra project, after the first win in the Netherlands.

The next race is the British GP at Silverstone in two weeks.

“I am still trying to let it sink in. Today was kind of hard. I had a good strategy for the dry and had won a good starting position, but in the rain it is so difficult to make a plan. I knew I had to be in the front group, and then wait and see. Brad [Binder} had a good rhythm, so I decided to follow him then attack in the last laps. Unfortunately for him he fell off. Then I had to keep calm and keep my own rhythm. I was trying to read my pit board but my visor was fogged. I couldn’t see if I was leading by 12 seconds or 1.2 seconds. After I had a big moment with three laps to go I looked over my shoulder, and I could see I had a clear lead.”

“Really happy with this position. In the Warm Up I really didn’t feel good but we used a similar setting to John who was strong and in the race I was really fast because of this. I was pushing so much and I knew that the front riders had a bit of a better pace, but I kept my rhythm and finally I finished in the podium.”

“When we made history with our first win at Assen, our next aim was to have two MGP3O machines on the podium, preferably first and second. It is all the better to have achieved this so soon, and with our sister brand Peugeot Motocycles. Today we proved that the Mahindra package can win races in both wet and dry conditions. I really doff my hat to John and Jorge, who both rode brilliant races in very difficult conditions. Now we in Mahindra are getting ready for a champagne shower!”

ReCharge Your Imaginations Mahindra Racing’s #DrivenByDesign Contest is Back

~Mahindra Racing launches crowdsourcing competition to design its racing driver Nick Heidfeld’s race suit for his home race in Berlin, Germany ~Winner gets opportunity of a lifetime to travel to Berlin and hand over race […]