SINGAPORE: 29 June 2017 — Longer-term vehicle dependability in India has declined marginally year over year, as 56% of new-vehicle owners indicate experiencing at least one problem with their vehicle, according to the J.D. Power 2017 India Vehicle Dependability Study,SM (VDS) released today. Last year, 53% of new-vehicle owners experienced at least one problem.

“In addition to usage, varying road and weather conditions affect the longer-term dependability of vehicles in India,” said Shantanu Nandi Majumdar, director at J.D. Power. “After about three years of ownership, problems related to squeaks and rattles are typically reported which is likely to impact overall build quality perceptions. Automakers that are able to identify such problems related to extended use—and resolve them at the manufacturing stage—are likely to be able to provide a more positive ownership experience for their customers.”

Longer-term vehicle dependability builds advocacy and loyalty: Among owners who indicate they have not experienced a problem, 74% say they “definitely would” recommend their current model to others and 53% say they “definitely would” repurchase their current make. In contrast, advocacy declines to 56% among owners who experience at least one problem with their vehicle while loyalty drops to 39%.

The study is based on evaluations from 8,741 original owners who purchased a new vehicle between July 2013 and September 2014. The study includes 74 models covering 17 brands, and was fielded from January through April 2017 in 40 cities.

About J.D. Power in the Asia Pacific Region
J.D. Power has offices in Tokyo, Singapore, Beijing, Shanghai, Malaysia and Bangkok that conduct customer satisfaction research and provide consulting services in the automotive, information technology and finance industries. Together, the five offices bring the language of customer satisfaction to consumers and businesses in Australia, China, India, Indonesia, Japan, Malaysia, Philippines, Taiwan, Thailand and Vietnam. J.D. Power is a portfolio company of XIO Group, a global alternative investments firm headquartered in London, and is led by its four founders: Athene Li, Joseph Pacini, Murphy Qiao and Carsten Geyer. Information regarding J.D. Power and its products can be accessed through the Internet at india.jdpower.com. 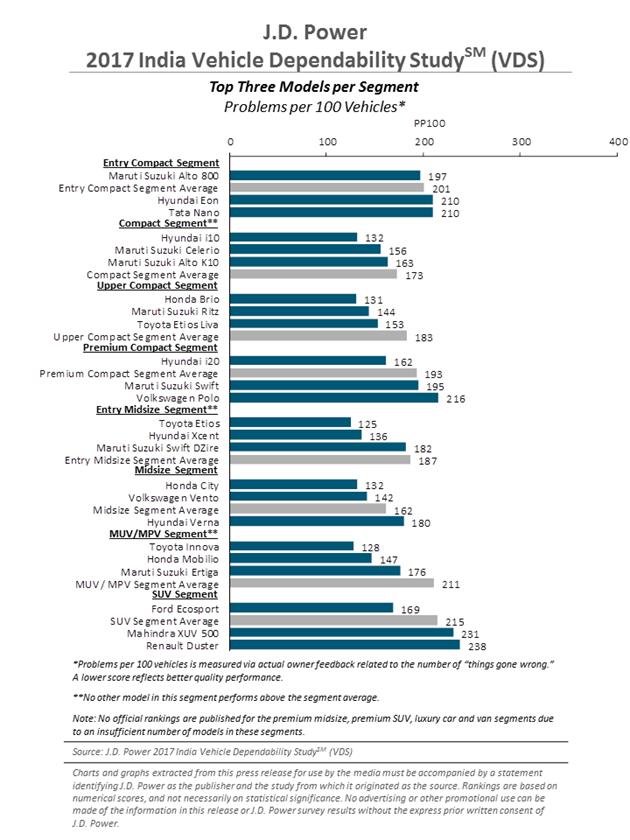