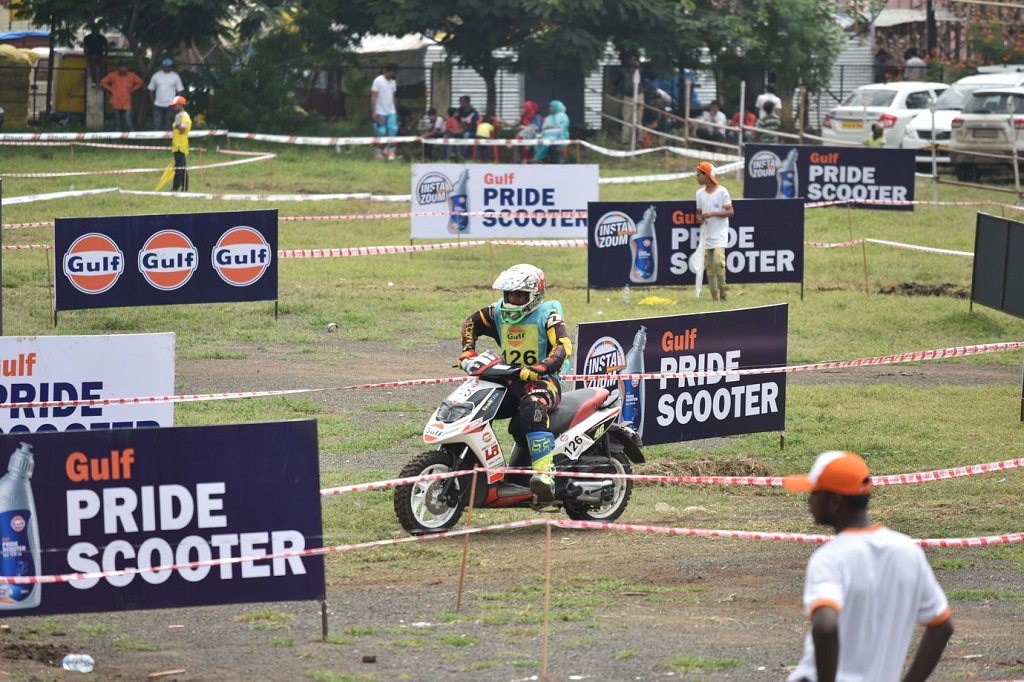 Bhopal, September 11th 2017: Motorsport Fans in Bhopal were treated with a grand exhibition of the riding skills by the ace two wheelers dirt track riders, Syed Asif Ali and Muzaffar Ali, at the first Gulf Monsoon Scooter Autocross 2017. The event was organised by Sportscraft in association with Gulf Oil Lubricants India.

Syed Asif Ali, the winner of the event, rode a TVS SXR 160, to emerge as the fastest rider in India’s first Gulf Autocross exclusively for scooters.

The two-wheeler racing ace from Bhopal incurred 02:57.41 seconds in penalty points in the 210cc Group B (modified) class which was a clean sweep by Team TVS. He was 31 seconds less in penalties than second placed Imran Pasha and Aakash Satpute, who was third in 03:00:31 seconds.

Muzaffar Ali, another local hero, also had his share of the limelight. Exhibiting smart skills the 36 year-old rider, who won the popular Gulf Monsoon Scooter Rally (Mumbai) in 2013, showed off much confidence and rode to win two classes – 110cc to 160cc 2 stroke and 110cc to 160cc 4 stroke. 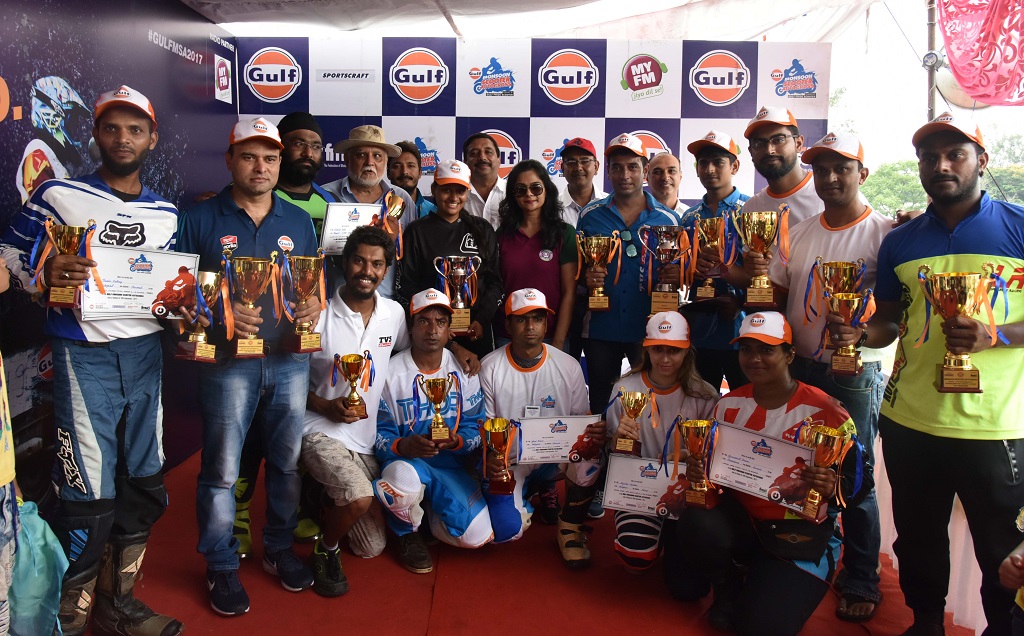 Ali won the 110 to 160cc class – 2 stroke, clocking 03:23:53 seconds as Bhopal riders took the first three places. Jaskaran Singh and Mohd Anwar were second riders. All three riders were astride an LML.

Nidhi Shukla of Aprilia Racing was the undoubtedly the best lady rider of the day. She timed 03:18.94 seconds in the class for 110 to 160cc 4 stroke scooters, while also winning the Ladies Open Class in which Vadodara’s Gurmail Kaur and Bhopal’s Aiysha Aslam placed second and third respectively.

There was stiff competition in the 110cc Group C 4 stroke class, which was won by Venkatesh Shetty. The Lorraine Team rider, astride a Dio, clocked 03:25:25 seconds in penalties to finish ahead of Bhopal’s Yasir Ishaq (Activa) and Nasir Ahmed (TVS Jupiter) in that order.

Autocross participant said Sadiq Ali: “This is the first time that I have been a competitor and I must say more than the competition I learnt a thing or two in riding. Watching the others go around the bends increased my confidence. I hope to use the experience when riding daily.”

Gurmail Kaur also felt participation in the autocross will make her a safer rider. “I hope the organisers have more such events.”

Simply put, the event, which had the huge spectator turnout watching in awe, was an exercise in the finer nuances of riding the scooters. While this branch of motorsport tests one’s skills in competition on a specially-laid out course, the idea behind the event is to educate the rider in the safety aspect of riding.

The rain stayed away during the event, but the course plotted by Sportscraft was really tricky and challenging. Participants had to negotiate a winding, bumpy track under slushy underfoot conditions. In the circumstances they had to exercise utmost caution to maintain the right balance and speed to avoid touching any of the many obstacles along the 900 metres course that would entail penalty points while being timed to the hundredth of a second. It was a test of skill and endurance.

It was not easy negotiating the many sharp turns and hairpin bends, and some riders, despite having a practice run after scrutiny of their scooters on Saturday evening, took a tumble or two. However, it must be said that most of them came through the exercise admirably.

All in all, it was an event to remember for the people and riders of Bhopal. Most participants experienced riding in competition for the first time, yet they thoroughly enjoyed the testing conditions. there was appreciation for the event and its smart organisation.

While two-wheeler riders of Bhopal can only wait hopefully for their next chance to bask under the sun, or rain, Gulf Oil certainly would be encouraged to stage more such events in other parts of the country. It will test and improve riders’ skill and endurance.

Gulf Oil Lubricants India Limited (GOLIL), part of Hinduja Group, is an established player in Indian lubricant market. It markets a wide range of automotive and industrial lubricants, greases, 2-wheeler batteries, etc. Today, the Gulf brand is present in more than 100 countries across five continents with values of ‘Quality, Endurance & Passion’ as its core attributes. The Gulf Oil International Group’s core business is manufacturing and marketing an extensive range consisting over 400 performance lubricants and associated products for all market segments.

Piaggio is delighted to start deliveries of India’s first sportscrossover bike, Aprilia SR 150 targeted at the discerning youth of India looking for the sensation of a sports bike coupled with the convenience of an […]

Manufactured in India, the bike is now commercially available and is set to create yet another category in India’s two-wheeler segment With the Aprilia SR 150 introduction, Piaggio India extends its local product portfolio from […]