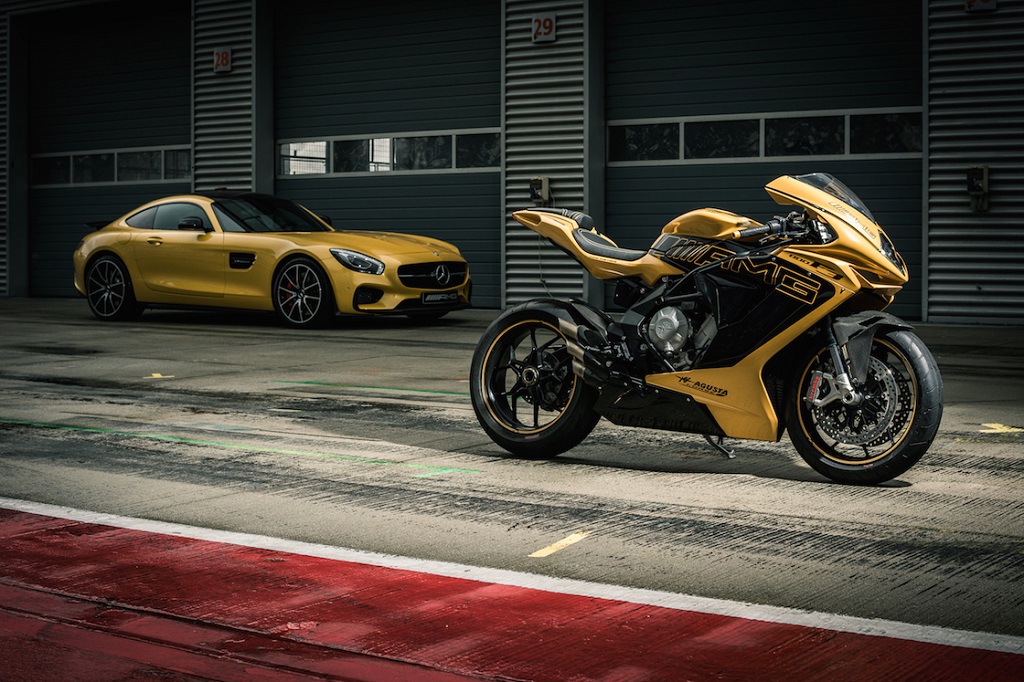 The sales of the exclusive 3 & 4 cylinder motorcycles made in Varese have reached the yearly benchmark close to 9000 units thanks to strong European and export numbers.  In Europe the largest sales increase was registered in the United Kingdom, with a strong 140% increase. Good results have been achieved in Spain with new MV sales incrementing 54% as well as an increase of 26% in Germany. Switzerland is registering an increase of 14% while domestic sales in Italy remaining substantially unaltered compared to 2014 figures (-0,1%).   MV Agusta has also shown a growth trend in the Far East with new unit sales increasing 12%.

The revenues have increased 30% and the contribution margin has augmented by 40% primarily attributed to the success of the premium models such as the Turismo Veloce and Dragster RR which are the best sellers following only the Brutale 800, which represents nearly 35% of total sales for the OEM of Schiranna.

In the fields of marketing and sales, the partnership between MV Agusta and Mercedes – AMG, which began exactly one year ago with the Premium car manufacturer entering into MV Agusta with the acquisition of a 25% minority stake, is completing its first activities.  During the past year the cooperation between the two companies has grown through various communications channels, combined Motorsports activities with the SBK ad DTM teams and at the principle auto-shows of the world in Geneva, Frankfurt and Tokyo.  At the German show the F3 “Inspired by AMG”, the first concept bike, was revealed next to its “twin” AMG supercar, the AMG GT S and their matching “Solar Beam” graphics.  A number of events were also organized at the respective manufactures headquarters in both Schiranna and Affalterbach.

The growing cooperation have also extended into their respective sales networks with the presence of MV Agusta motorcycles in various AMG Performance Centers (Stuttgart, Paris, Tokyo and Taipei), while the sales of the motorcycles will continue purely through the 450 worldwide MV Agusta dealerships.  This operation of “lead branding” will continues in 2016. Sales and marketing forms the core of the long-term strategic partnership and will continue to be the base for the collaboration upon which the partnership was born

The President and CEO Giovanni Castiglioni has commented: “2015 has been a very important year for MV Agusta.  With the launch of the Turismo Veloce we have created the first Touring MV Agusta, a motorcycle that differentiates itself from its competitors by introducing a whole new dimension and experience to traveling, touring that excites your emotions. This aspect is what sets MV apart from other manufactures. This model has been an important factor in sustaining the increase in sales growth, margins and revenues. I am very happy with the first year of the sales and marketing activities with our shareholding partner, Mercedes – AMG: the two brands are a pure example of passion, performance and adrenaline sharing the same true values.

2016 has begun in positive with the anticipated debut of the most important model in terms of sales volumes and image, the All-New Brutale 800.  The press launch will take place in January 2016, 15 years after the original Brutale , with total sales numbering over 30,000 units.  The All- New Brutale 800, is  “the most beautiful Brutale, ever built.”

MV Agusta, one of the most premium manufacturers of superbikes in the world, is being launched in India by the Kinetic Group through its initiative “Motoroyale”.  Kinetic has already finalised its dealerships for top cities like Mumbai, Delhi and Banglore and the homologation process is underway.  Kinetic MD, Ajinkya Firodia stated “It is the right time for launching MV Agusta in India.  The Superbikes market in India has been growing steadily; and so has been MVAgusta.  This momentum shall ensure a long term success for the brand in India”

MV Agusta wins an award for each of its motorcycle

Within one year of launch, MV Agusta wins awards for each one of its motorcycle from various publications sPune, 5th Feb 2017: MV Agusta, the legendary Italian company known for the world’s most premium high-performance […]