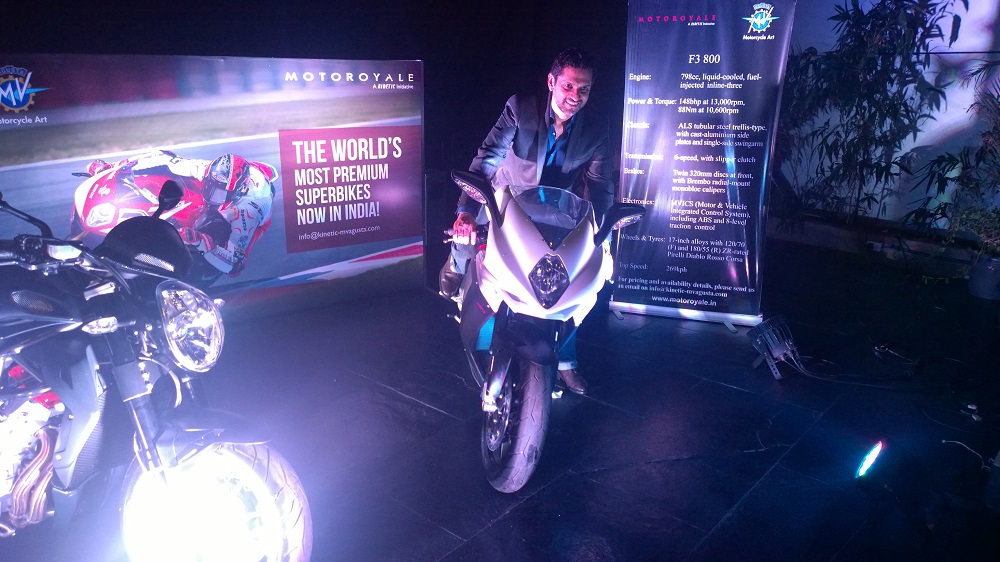 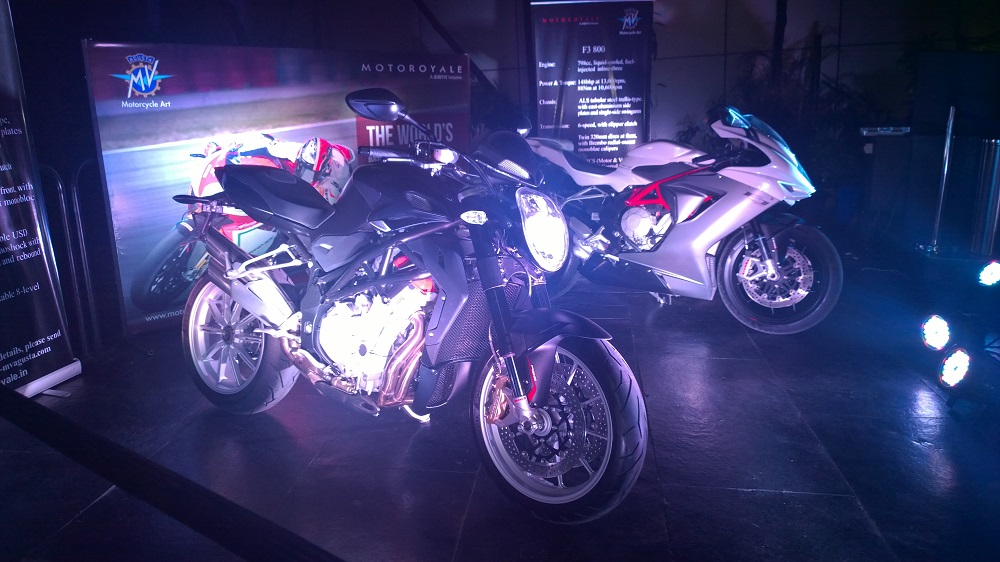 The Kinetic Group, which has an exclusive arrangement with MV Agusta S.p.A. of Italy for the import and sale of high-end MV Agusta superbikes in India, unveiled the gorgeous machines for the first time at blueFROG in Pune, on Saturday 17th October. In an event attended by all major Pune-based motorcycling groups, comprising of more than 200 bikers and superbike enthusiasts, Mr Ajinkya Firodia (MD, Kinetic World Pvt. Ltd.) unveiled the MV Agusta Brutale 1090 and MV Agusta F3 800,  both of which are class-leading superbikes in their respective segments.

The MV Agusta Brutale 1090, which was originally designed by the legendary Italian motorcycle designer, Massimo Tamburini, is powered by a 1078cc four-cylinder engine that produces 144 horsepower and 112Nm of torque, which makes for intense acceleration and an intoxicating top speed of 265kph. The bike comes with advanced electronics, including 8-stage traction control and ABS. Introductory ex-showroom (Pune) prices for the Brutale 1090 start at Rs 17.99 lakh, and delivery period for the bike is 2-3 weeks.

The MV Agusta F3 800, which has been hailed as one of the best looking superbikes in the world, is powered by a 798cc three-cylinder engine, which produces an impressive 148 horsepower. Top speed is an equally impressive 269kph and the bike comes equipped with 8-stage traction control and anti-lock brakes (ABS).  Pricing for the bike will be announced closer to its launch in India, which is scheduled for early-2016.

The Kinetic Group has an exclusive partnership with MV Agusta for the Indian market, and will be providing spares, service and aftersales support for MV Agusta customers in India. As part of its marketing strategy, the Kinetic Group will set up a chain of superbike showrooms, titled ‘Motoroyale,’ in major metro cities across India, for the retail of high-end superbikes.

Based in Varese, Italy, MV Agusta was founded in 1945 and today MVA machines are considered the holy-grail of high-performance motorcycling. With groundbreaking bikes like the F4, which was designed by the legendary Massimo Tamburini, and the Brutale range of naked sportsbikes, MV Agusta sets the standards in the world of high-performance superbikes. The Italian company has won multiple titles in 500cc and 350cc roadracing world championships, and has also won many races at the Isle of Man TT, the world’s toughest roadracing circuit.

Kinetic World Pvt. Ltd. is a part of the Kinetic Group of companies, a pioneering automotive group in India. Kinetic has been in the automotive business since 1972 and is widely known for its innovative products. Kinetic has always been known for introducing advanced technologies in India, and has extensive experience in retail as well as after-sales service for two-wheelers.