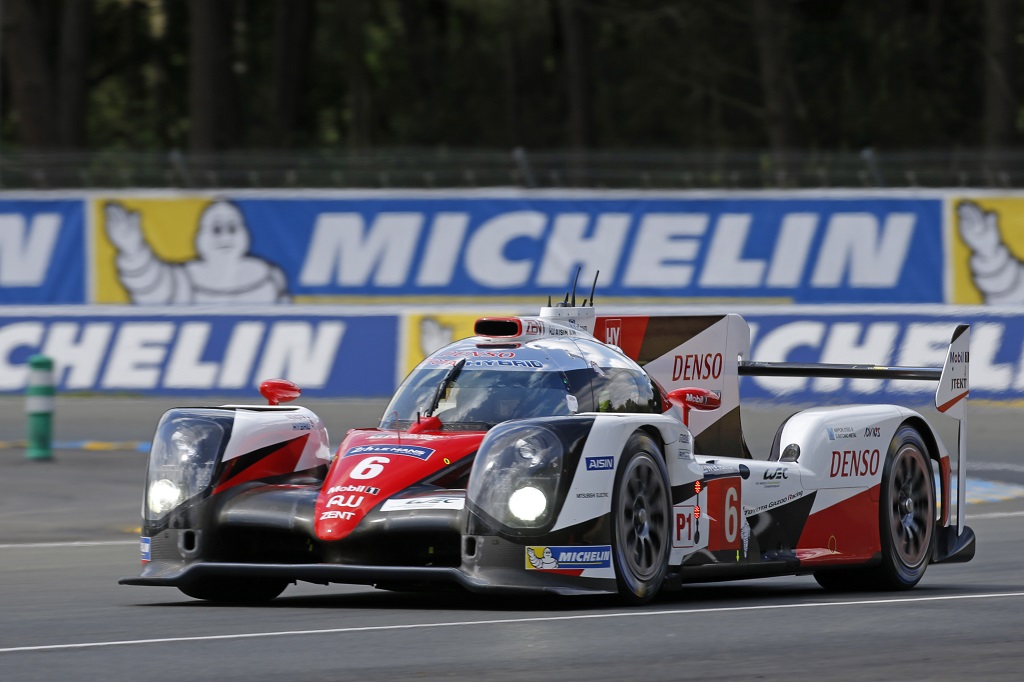 Heavy rain on Saturday afternoon prompted the ACO (Automobile Club de l’Ouest) to officially start the 84th Le Mans 24 Hours behind the safety car. Twice around the clock later, the world-famous race concluded in splendid sunshine. Between the two, Michelin’s partners benefited from the necessary spectrum of tyres to match their respective game plans.

Competitors started the race on MICHELIN’s Wet or Full Wet tyres before going on to switch to soft-compound slicks (in the case of the LMP1-H prototypes) and the medium-compound slick in the other classes. The way the race unfolded produced an intense contest between Toyota and Porsche, and the Japanese team led for the majority of the night before its German rival gradually gained the upper hand. The spectators were treated to an exceptional fight which saw the lead change hands several times. When the Toyota TS050-Hybrid of Anthony Davidson, Sébastien Buemi and Kazuki Nakajima started its final lap, it had its sights set on the Japanese make’s first ever Le Mans victory but the car was halted by a technical problem on the start/finish line. Victory ended up going to the N°2 Porsche 919 Hybrid of Romain Dumas /Neel Jani /Marc Lieb who finished clear of the N°6 TS050-Hybrid (StéphaneSarrazin/Mike Conway /Kamui Kobayashi) and the N°8 Audi R18 (Lucas DiGrassi/Loïc Duval /Oliver Javis). The fastest race lap was the work of Kamui Kobayashi (3m21.445s, Lap 81).

Tyres to cover every strategy

The Japanese team chose to run triple stints of 14 laps each (572km in total), while Audi also opted for triple stints but of 13 laps (531km). Meanwhile, Porsche ran both triple and quadruple stints (13 and 14  laps, up to 708km) on the same set of tyres. Each time, its cars posted top lap times both at the beginning and at the end of their runs.

“The tyres available for our different partners at Le Mans allowed them to roll out their respective game plans as a function of their preferred strategies,” says Michelin Motorsport Director Pascal Couasnon. “The LMP1-H cars posted average speeds in excess of 240kph over the 24 hours and all the teams successfully triple-stinted – at least – in every class. Numerous LM GTE Pro and LM GTE Am teams triple-stinted on the same tyres which is a first for these racing cars which are derived from road cars, the weight distribution of which presents a different sort of challenge compared with that associated with the prototypes. This illustrates the close relationship that exists between motorsport and mass production, enabling technological synergies that allow us to be increasingly competitive both on the race track and in the street.”

Third place went to the Chip Ganassi USA Ford GT of Ryan Briscoe /Scott Dixon /Richard Westbrook. All three cars used the whole range of slick tyres: the MICHELIN Cold Weather Medium, the Dry Weather Medium and the Hard for dry conditions and the Wet/Full Wet when the track was wet or damp.

Michelin has introduced a new range of tyres for the LM P2 class in which its partners formed the minority (3 cars from 23). Even so, the Barthez-Panis Compétition Ligier JSP2 – Nissan completed the race in eighth position in its class. It was also the second-best placed Ligier at the finish. “That’s an excellent result in this class in which we didn’t have many partner cars and in which we have returned to the highest level,” says Jérôme Mondain, manager of Michelin’s FIA World Endurance Championship programme.

The next round of the 2016 FIA WEC will take teams to Germany on July 24, for the 6 Hours of Nürburgring.

MICHELIN Scorcher ranges dedicated to Harley-Davidson now available via all tire distribution networks Michelin and Harley-Davidson, who have been partners since 2008, announced they have signed an agreement allowing the tires with both Michelin and […]

Michelin and Green GT: a strategic partnership with a focus firmly on the future

Michelin is today the only manufacturer to provide tyres for the fuel-cell vehicles developed by Green GT. However, the scope of this technologically-advanced partnership between the high-performance clean-car specialist and the Clermont-Ferrand based mobility expert […]