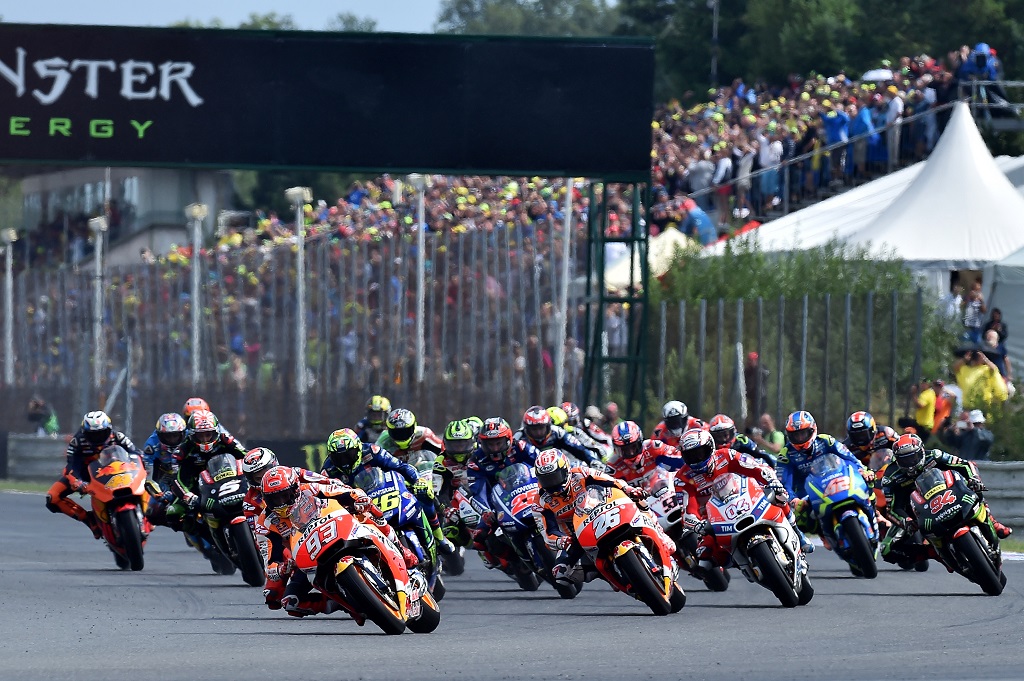 The 22-lap race was declared wet and all riders started the event with MICHELIN Power Rain tyres. Marquez began from pole and was the only rider to choose the soft compound option rear tyre, which he paired with a medium front. He led into the first corner, but was passed by Jorge Lorenzo (Ducati Team), who took the honour of leading the first time the riders went over the finishing line. The sun was now starting to shine and temperatures began to rise and start to quickly dry the track, as Marquez became the first rider to enter the pits and change to a bike fitted with MICHELIN Power Slicks. Using the front and rear medium compound option, he immediately put them to good use, cutting through the field and taking the lead on lap-six. He continued to push and soon had a 20-second advantage as all the other riders followed him into the pits to change to their respective machines fitted with slick tyres. Marquez controlled the race from the front and crossed the line to take victory and extend his lead in the championship.

With all riders choosing wet weather tyres from the start and then coming into the pits to change, it took a while for the race to settle down and positions to become clear in-front of the 87,541 fans at trackside. Dani Pedrosa (Repsol Honda Team) made his way through the field – after re-joining in eighth – to take second place. Third went to a hard-charging Maverick Viñales (Movistar Yamaha MotoGP), the Spaniard was 13th after his pit-stop and pushed through to take third, his charge being highlighted as he set the fastest lap of the race on the 17th circulation. Valentino Rossi (Movistar Yamaha MotoGP) was one of the last riders to come in and change bikes and he then had to set about passing other riders as he returned to the track in 14th. He did this with some impressive overtaking manoeuvres as he pushed his way to fourth at the chequered flag.

As the riders changed to their different machines within the flag-to-flag rule, the most popular pairing of Michelin slick tyres was the medium front and medium rear. Some riders chose to go with soft front and rear, whilst some others opted for medium front and soft rear, again highlighting the choice that is open to all competitors, teams and manufacturers.

Cal Crutchlow took fifth and the honour of First Independent Rider. Sixth went to Andrea Dovizioso (Ducati Team), as he led Danilo Petrucci (OCTO Pramac Racing) across the line. Eighth was Aleix Espargaro (Aprilia Racing Team Gresini), a result which could have been better, but he was penalised three places following an unsafe release when he changed bikes in pit-lane. Pol Espargaro (Red Bull KTM Factory Racing) took an impressive ninth to give him and the KTM team their best result of the season and meant that five different manufacturers finished within the top-nine places. The top-10 was rounded out by Jonas Folger (Monster Yamaha Tech 3).

The three podium places were filled by Spanish riders, which was a fitting tribute to one of Spain’s, and motorcycle racing’s, greatest champions. MotoGP Legend Ángel Nieto sadly died this week following a quad-bike accident, the whole paddock gathered in tribute to the 12+1 World Champion this morning and pay their respects to a man who rode to success on Michelin tyres many times in his championship` winning years.

Michelin will now remain at Brno for a one-day test around the 5,403m Brno Grand Prix circuit in the Czech Republic, before the whole paddock packs up and heads to Spielberg in Austria for round 11 of the championship next Sunday.

“Today was a really tricky race, especially with it being a flag-to-flag. It was very complicated for all the riders as it was difficult to choose the tyres. I made a mistake because I chose the soft rear wet, it was too soft for the conditions so this meant I had to go in early and change. Then I started to get a rhythm with the slicks and this weekend I have felt good on the wet and dry tyres and this made a difference in the race because I felt confident. When I saw I had the gap I made sure I finished the race in a good way and with a strong rhythm. I am happy because Michelin gives us the stability with the tyres, this is important for all the riders and I am very happy with what they are doing.”

“Today was very complicated with the weather, we had so many riders change their choice of wet tyres on the grid and then it started to dry and it was surprising how quickly some came in to change their bikes. The wet tyres worked well right at the start and after the Friday Free Practice in the rain, when we saw some very fast times, we were confident that would be the same today. Marc took an early decision to come in and that certainly paid off for him as he immediately started to set consistently fast times in the drying conditions. We were very happy to see this as it demonstrated the grip levels available on a cool – and in some places – damp track. The performances from the rest of the field with different compounds was also very pleasing and with Maverick setting the fastest time on lap-17 that was also a testament to the durability and showed no drop-off from the tyres. We will now have a one-day test here at Brno before we travel straight to Austria for the next round where we have a completely different challenge, but one we are more than ready for. “Finally, on behalf of Michelin, I would like to pass on our condolences to the family and friends of Ángel Nieto, he was a great Michelin champion and will certainly be missed around the paddock and will be a great loss to racing.”

Michelin to Acquire NexTraq, a Telematics Provider, from FLEETCOR

Expands Fleet Management Capabilities for Commercial Trucks in the United States June 20th, 2017 — Michelin today announced that it has agreed to acquire NexTraq, a U.S. provider of commercial fleet telematics, in an all-cash […]