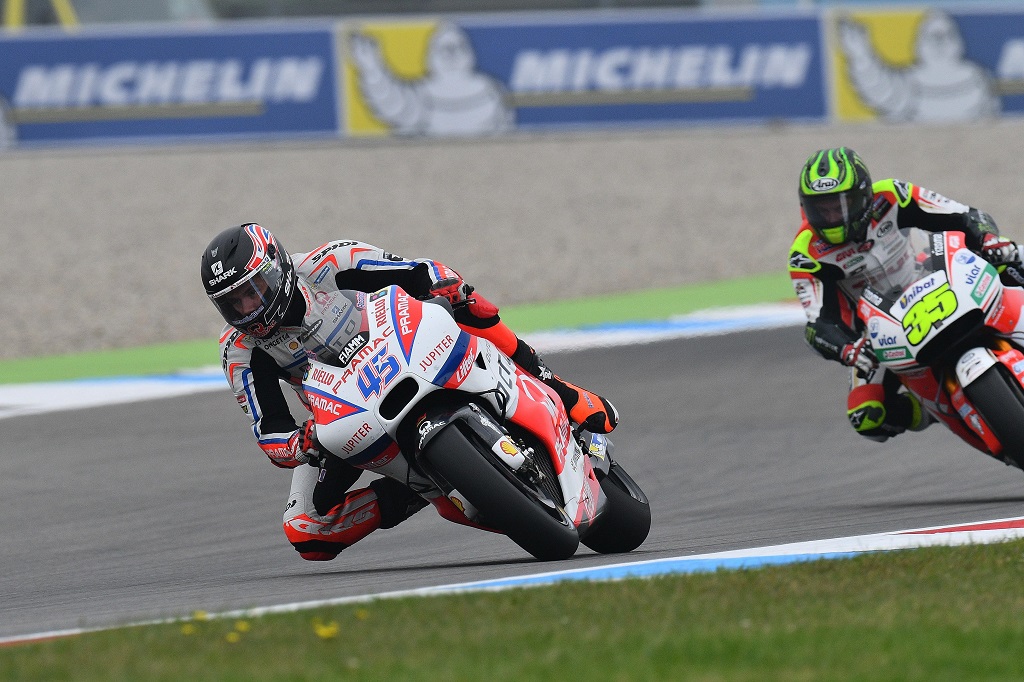 Michelin is heading to Sachsenring in Germany for the GoPro Motorrad Grand Prix Deutschland an event that sees the half-way point of the MotoGP™ season and signals a first for the French tyre manufacturer in its current Grand Prix incarnation.

Sachsenring is a technical circuit that features fast and long left-hand turns, slow rights and abrasive asphalt, which makes it one of the most demanding tracks on the calendar, despite the layout’s distance of just 3,671m in length – making it the shortest circuit of the season. With this in mind Michelin will be supplying front asymmetric MICHELIN Power Slick tyres for the first time this season. These new compound tyres have be specifically designed to meet the stresses expected at Sachsenring and with 10 left-hand turns, the left shoulder of the front tyre will feature a harder  rubber to cope with the high temperatures this track is expected to produce. Available in a soft version with the white identifying band and a hard compound (yellow band) these two asymmetric tyres will also be joined in the range by a medium (no band) symmetrical front slick giving the riders a different option depending on the conditions.

To match the front allocation Michelin will have another first at the German track, as it will offer a rear slick which also features a harder left shoulder in its asymmetrical design. Again designed to cope with the fast lefts, this tyre will also need a softer right side to heat up quickly and give the riders the grip they need for the slow right that comes early on every lap. Available in medium (no band) and hard (yellow band), the balance of these different compounds on each tyre is crucial to giving good performance, as well as maximum safety and durability at this testing track. To complete the collection, Michelin will also have the Power Rain tyres which were used competitively the last time out at Assen in the Netherlands and the Power Inters for use in mixed weather.

Situated in eastern Germany, approximately 100km from Dresden, Sachsenring was once a circuit that held its races on closed public roads, similar to Assen, Brno and the Isle of Man, but since 1996 racing has taken place on a purpose built track near the town of Hohenstein-Ernstthal, where  It has staged a motorcycle Grand Prix every year since 1998. Steeped in history, the area was once the focal point of Germany’s automotive industry and the manufacturers would race their machines around the streets. This history, combined with the party atmosphere throughout the whole weekend, makes Sachsenring a rich cocktail of octane fuelled excitement that motorcycle race fans adore.

Michelin and the MotoGP paddock will take to the track on Friday for the first of two free practice sessions, followed by a further practice the following morning. These three sessions will decide which qualifying session each rider competes in on Saturday afternoon to confirm the grid positions for Sunday’s 30-lap race. The lights will change to go at 14.00hrs CEST (13.00hrs BST, 12.00hrs GMT/UTC) for what promises to be an interesting race in-front of what is likely to be another sell-out crowd.

“After the excitement and diverse conditions we had last time at Assen, it would be nice to have a straightforward weekend, but if you want that then Sachsenring is not the place to go! It is a very demanding circuit and the layout – with its long left-hand corners – generates a lot of heat that the tyres will have to contend with. With this in mind we have created completely new compounds designed especially for this track. This will be the first time we have had asymmetric rear tyres where the left is harder to cope with the high temperatures and it will also feature a soft right-hand-side to heat up rapidly for the sharp, slow right-hand corner that comes at the beginning of each lap. This follows a lot of left turns and the start/finish straight – so it will need to get temperature very quickly to give the riders the grip they need. Sachsenring will also signal the first time we have provided a front asymmetric tyre as well as a rear at any race this season. Sachsenring is another circuit where we can have variable weather – similar to Assen – so we have to be prepared for that, but no matter what the conditions are, the huge German crowd will certainly have a good time, as this is one of the big party races of the season.”