Valentino Rossi rode to a stunning  victory on new compound Michelin tyres at the Catalunya MotoGP™ this afternoon as the nine-time World Champion fought off the challenge of his nearest rivals to take his seventh premier class win at the Montmélo circuit.

Starting from fifth on the grid, Rossi was blocked on the first corner and relegated to eighth position. He quickly rectified that with his trademark passing manoeuvres and was soon in to fourth place. Over the next few laps Rossi passed the Honda of Dani Pedrosa, pole-setter Marc Marquez also on a Honda and previous championship leader – and Yamaha team-mate – Jorge Lorenzo, as he moved to first place on lap-seven. Using the new compound hard front and rear MICHELIN Power Slicks, the Italian consistently circulated the Catalonian circuit at the head of the field before Marquez chased him down and challenged for the lead with five laps remaining. The pair battled for the victory as the race drew to a close, before Rossi took the initiative after a mistake by Marquez and made the final decisive break to take a hard-fought, but thoroughly deserved victory, with Marquez following him home with the consolation of taking the championship lead. 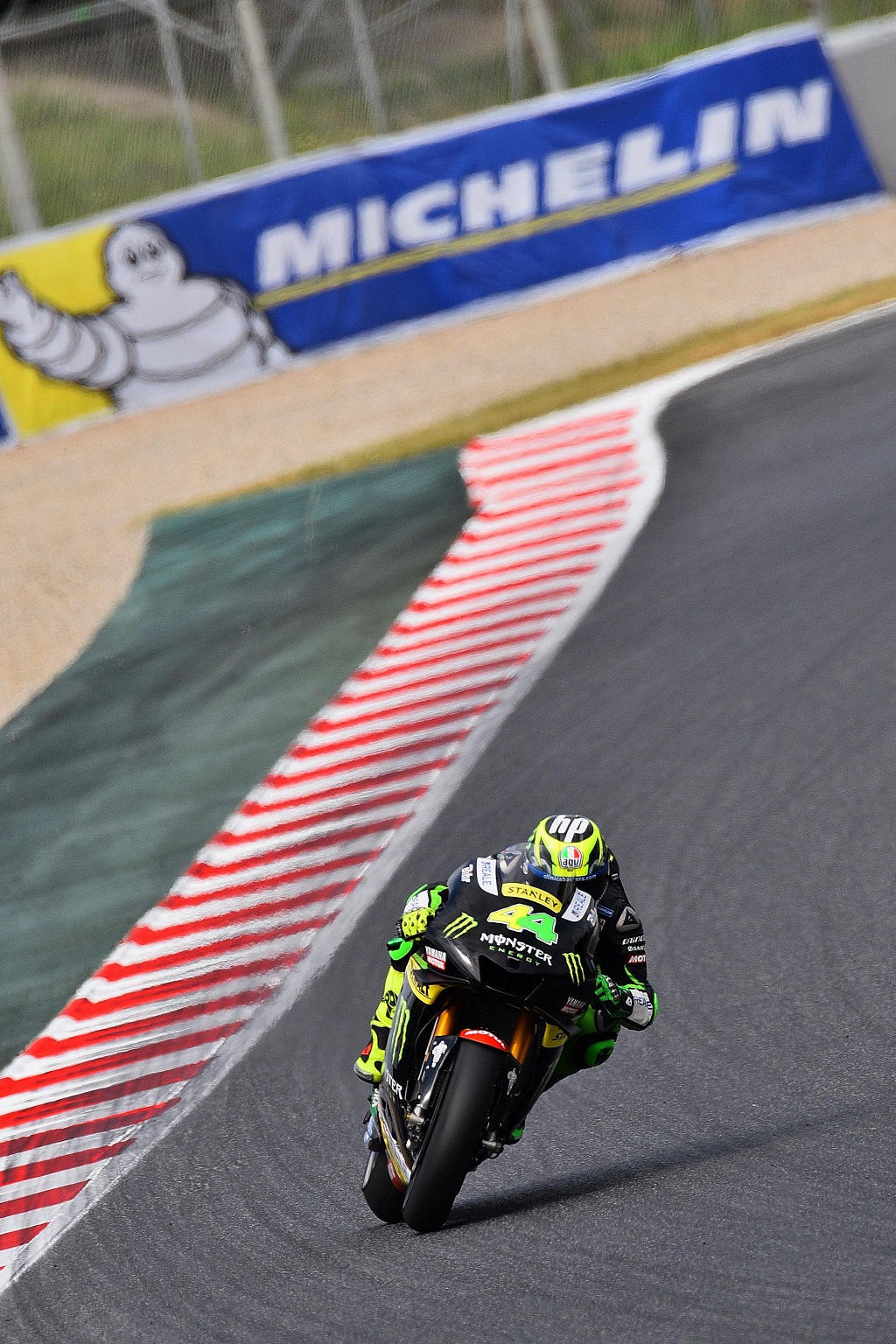 A crowd of almost 100,000 people packed the grandstands and were treated to a superb day of racing from all three classes. In beautiful, warm sunshine today’s track temperatures rose to the highest this weekend as the asphalt reached 48°C, this combined with the poor condition of the surface, which gave little grip to the riders, made tyre choice an important factor. The majority of the field went for a hard front and rear selection, to give durability over the tough 25-lap race. Pedrosa was one rider to make a different choice, as he chose a medium compound rear to partner his hard front, and used the pair to good effect to take the final podium position.

Fourth-place went to Suzuki’s Maverick Viñales, while the honour of First Independent Rider was secured by Pol Espargaro on a satellite Yamaha, an impressive result and one that also showed the performance of the medium compound MICHELIN Power Slicks, as the Spaniard was one of only two riders to use these on the front and rear of their machines. Cal Crutchlow on a Honda was sixth, Ducati’s Andrea Dovizioso seventh, with the Aprilia of Álvaro Bautista taking eighth. Danilo Petrucci on a Ducati was ninth and Honda’s Jack Miller rounded out the top-ten – the best result of his premier class MotoGP career so far. Lorenzo didn’t make it to the chequered flag, after an incident which saw Ducati’s Andrea Iannone collide with the current World Champion and leave both of them on the side of the track and out of the race on lap-17. This was the only crash during today’s race and for the second successive event no crashes were contributable to tyres, a fact that underlines the advances Michelin is making as the season progresses. 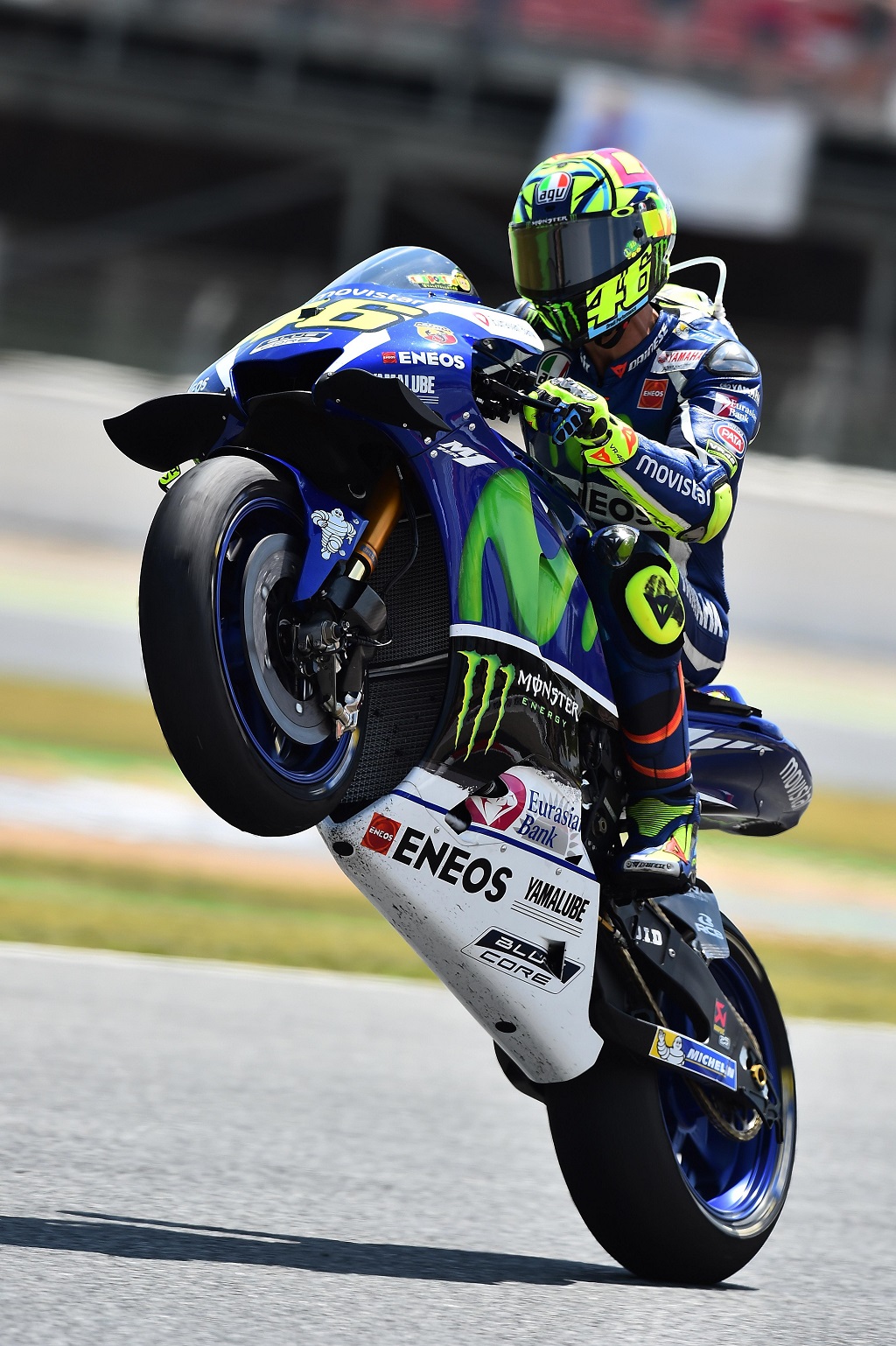 Today’s race was held on a revised circuit configuration, to the one originally planned, due to the tragic events which have overshadowed this weekend’s proceedings. During Friday’s second Moto2 Free Practice session Spanish rider Luis Salom crashed at turn-12 and the 24-year-old succumbed to his injuries. Following the fatal crash and subsequent discussions, the layout of the circuit was changed for safety reasons and the F1 track configuration was implemented. This featured the addition of the chicane at turn-12, designed to miss out the corner where the accident happened. Everyone at Michelin would like to pass on their condolences and deepest sympathies to the family, friends and team of Luis Salom.

Michelin will remain at Montmélo for a one-day test on the Monday where the latest versions of the MICHELIN Power Slicks will be tested and evaluated by all riders. The paddock will then move to the most northerly circuit on the calendar, as the championship heads to Assen in the Netherlands for the Dutch TT on Sunday 26th June, the first time this iconic race has not been staged on a Saturday.

Valentino Rossi – Movistar Yamaha MotoGP: “We were a little bit worried about what might happen, because yesterday we had a bit of a problem with the hard tyre and making it work, but today it was good and worked well in the temperature with my bike. I think it was difficult for everybody with some spinning, but the tyres worked really well and I am very happy with the result.”

Nicolas Goubert – Deputy Director, Technical Director and Supervisor of the MotoGP Programme: “This has been a very difficult weekend for all concerned, after what happened on Friday, and I would firstly like to pass on my condolences to the family and friends of Luis Salom, it was a terrible tragedy and one that nobody ever wants to happen.

“Regarding the race weekend, we had a selection of tyres that we thought would work well here in most conditions, but we never expected the surface to be as poor as it was. The track gave very little grip and all the teams had to work hard to get the best for their bikes. The change of layout also made a big difference and changed the stresses that were put on the tyres. For the race itself the track was at almost 50°C, but the majority of the field used the new hard compound tyres to cope with these difficult conditions and although we experienced quite high levels of wear we were pleased with the overall performance. Valentino rode a great race and when he came under attack from Marc the performance in the tyres was still there in the last laps to produce a memorable end for the fans. One of the most pleasing aspects of today’s race was that again we had no crashes that the tyres could be held responsible for and it was a close race right until the end. This is another step forward for us and shows that we are continuing to work in the right direction. We now have a test on Monday, when we have some tyres for all the rides to try, hopefully this will give use more information as we head towards the second half of the season and some very challenging circuits.”