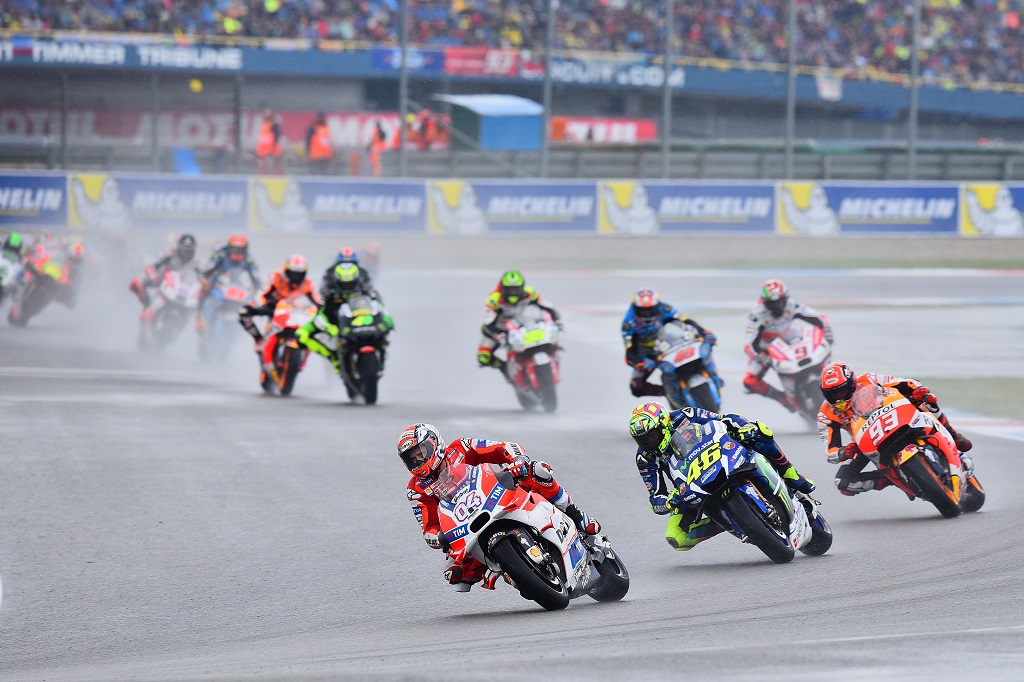 Michelin saw its rain tyres used in competitive action for the first time this season as Australian Jack Miller (Estrella Galicia 0,0 Marc VDS) took his inaugural MotoGP™ win in treacherous conditions during the Dutch TT at Assen in the Netherlands today.

Due to a heavy rainstorm that swept over the 4,452m circuit shortly before the start of the 26-lap race, all riders started the event with MICHELIN Power Rain tyres. From the beginning the race became an intense battle with the lead changing hands, before the skies opened and the track was deluged with water, giving race direction no other option than to red flag the event due to the adverse weather conditions after 14-laps.

This forced a re-start to be scheduled which would be just a 12-lap race in length. Fortunately the rain subsided and the event got underway on a wet track, but without any further precipitation. With every rider on the soft front and rear version of the Power Rain tyres, the grid reformed in the positions that the racers had finished in the previous aborted race, giving a front-row start to Andrea Dovizioso in pole-position for the Ducati Team, Danilo Petrucci on the OCTO Pramac Yakhnich Ducati in second and Valentino Rossi on his Movistar Yamaha in third, Miller started from the third row in eighth position. Dovizioso led off the line, but was soon passed by Rossi as the Italian set about securing another victory at Assen. This unfortunately didn’t go to plan, as the Yamaha-man crashed while in the lead on lap-three. This handed first place to championship–leader Marc Marquez (Repsol Honda), but his lead only lasted for one-lap before he was passed by the hard-charging, but smooth, Miller. The 21-year-old Australian on-board a Honda then took control of the race and never looked like surrendering the lead, as he crossed the finish line with an almost two-second advantage.

This year’s Dutch TT was held on a Sunday for the first time in its history and despite the torrential rain the huge crowd of 105,000 – the largest race-day attendance of the season so far – were treated to an exciting and incident packed race. Miller also took the accolade for the First Independent Rider and became the first non-Factory racer to win a premier class event since 2006.  Marquez took second in the race, with Scott Redding (OCTO Pramac Yakhnich Ducati) filling the final podium position after an exciting battle with Monster Yamaha Tech 3 rider Pol Espagaro, which saw the Englishman get the better of the Yamaha rider as the race drew to a close. Andrea Iannone of the Ducati Team took fifth, with Hector Barbera (Avintia Racing) sixth and Eugene Laverty (Aspar Team MotoGP) in seventh completing a trio of Ducatis to cross the line in quick succession. Aprilia Racing Team Gresini’s Stefan Bradl was eighth, with Maverick Viñales the first Team SUZUKI ECSTAR rider in ninth. World Champion Jorge Lorenzo of Movistar Yamaha took the final top-ten position.

Prior to today’s wet proceeding the MICHELIN Power Slicks had worked well throughout the weekend and had given the riders plenty of grip and feedback during the first three free practice sessions, before the rain also intervened in yesterday’s FP4 and qualifying. The data obtained during this weekend’s various wet sessions and the two versions of today’s race will prove invaluable for the Michelin technicians as the season continues, as will all the information gathered in the dry.

The MotoGP paddock will now cross the Dutch border and head to Sachsenring in Germany for the ninth round of this season’s championship, scheduled to be held on Sunday 17th July.

“It was an amazing day today and a very special race! We had two races, so it almost felt like World Superbike day. We haven’t had much wet track time this year so it was nice to get some feedback from the Michelin tyres and how they were working, and how the bike worked with the tyres. Yesterday I had two little crashes, but that was to do with not setting the bike up right for the different tyre. We adapted our bike around it and changed the set-up for today. After the first race we made some more changes to get it ready for the re-start and it was even better and the tyres worked very good for me in the race. I think with more time we can take things further with the Michelin tyres.”

“This is the first time we have used the wet tyres in a race and in the first event – that unfortunately was red-flagged – they performed very well. All the riders had time yesterday to try them and adapt the set-up accordingly, so the race went trouble free, despite the almost impossible conditions with lots of water on the track. The second race was completely different, because with the shortened distance many riders  were going much harder and as they pushed so hard some made mistakes, but Miller rode a great race and I was very impressed with how smooth he was on the bike and he thoroughly deserved his victory, so congratulations to him.

“In the dry on Friday and Saturday we were very pleased with the performance of the tyres and if the conditions had been different today I am sure we would have seen the race produce a fast pace, but the weather intervened so we will never know. We have learned a lot from this circuit, certainly about the wets and we will act on all the data to make sure we continue to supply the riders with the best tyres for all conditions and carry on evolving.”