SINGAPORE, 25 MAY 2017 — More than half of all dealers across the three largest vehicle segments in India—passenger vehicles, two-wheelers and commercial vehicles—express confidence for a profitable financial year as customer buying sentiment continues to improve, according to the J.D. Power 2017 India Dealer Satisfaction with Automotive Manufacturers Index (DSWAMI) StudySM released today.

More than half (58%) of all passenger vehicle dealerships in India expect to generate a profit in fiscal year 2017, up from 49% last year. Only 15% of dealers anticipate a loss, the lowest percentage in the study’s history. In addition to extending financial support to their dealers to ensure their viability, automakers are making concerted efforts to improve their systems, resulting in fewer delays and discrepancies. In 2017, 22% of dealers indicate they have not experienced a delay in the delivery of vehicles, up from 16% in 2016.

“It is encouraging to see that automakers are dedicated to enhancing their systems so that information can be relayed without error or delay,” said Shantanu Nandi Majumdar, director at J.D. Power. “With the overall Indian economy and the automotive industry on the road to recovery, manufacturers that are committed to extending this support are more likely to develop stronger ties with their franchise.”

Being measured for the first time in the study, dealer satisfaction with two-wheeler manufacturers averages 780 (on a 1,000-point scale), with 54% of all two-wheeler dealerships expecting their financial performance this year to be better than the previous year, and half expecting to be profitable.

However, nearly one-fourth (24%) are disappointed with management’s concern regarding dealer viability and 78% believe manufacturers need to improve relations with dealers. This is a lesser concern for dealers in India’s six largest cities where one-fifth (21%) are disappointed with the extent of financial support provided, compared with 28% in the rest of the country.

Commercial vehicles are measured in the study for the first time. Across the nine factors that compose the index, satisfaction with product ranks highest among dealers at 806. Nine out of 10 dealers indicate that the manufacturer has the range of vehicles to compete effectively in the market.

Marketing and sales activities, a key factor in the study, has the lowest overall score in the study with one-fourth of commercial vehicle dealers indicating they are disappointed with the variety of sales promotions (26%) and reasonable dealer advertising allowance (27%).

“As 2017-18 gears up for new model launches, facelifts and new variants across the three vehicle segments, savvy and effective marketing strategies will be the key to higher sales and enhanced brand image,”        Majumdar said. “With more and more touchpoints in the purchase journey becoming digital, the next few years are likely to see a sharp rise in digital marketing spend by manufacturers.”

In the passenger vehicle segment, Toyota (938) ranks highest in dealer satisfaction for the seventh consecutive year, performing particularly well across all factors. Maruti Suzuki ranks second with a score of 920, followed by Renault (914).

Royal Enfield, with a score 868, ranks highest in dealer satisfaction among manufacturers of two-wheelers, followed by TVS at 834. Honda ranks third with 808.

In the commercial vehicle category, Mahindra ranks highest in dealer satisfaction with a score of 890. Ashok Leyland ranks second with 801, followed by Tata (777).

Now in its seventh year, the India DSWAMI Study measures dealer satisfaction with vehicle manufacturers or importers in India and identifies dealer attitudes regarding the automotive retail business. Dealerships of two-wheeler and commercial vehicle manufacturers in India are covered for the first time in the 2017 study. Overall dealer satisfaction is determined by examining nine factors (in order of importance): sales team; marketing and sales activities; support from the manufacturer; product; vehicle ordering and delivery; training; warranty claims; after-sales team; and parts.

The 2017 study is based on responses from 2,358 dealer principals or dealership general managers located in more than 200 cities throughout India. The study was conducted in association with the Federation of Automobile Dealers Associations (FADA) and was fielded from January through March 2017.

technology and finance industries in the Asia Pacific region. Together, the six offices bring the language of customer satisfaction to consumers and businesses in Australia, China, India, Indonesia, Japan, Malaysia, Philippines, Taiwan, Thailand and Vietnam. Information regarding J.D. Power and its products can be accessed through the Internet at india.jdpower.com 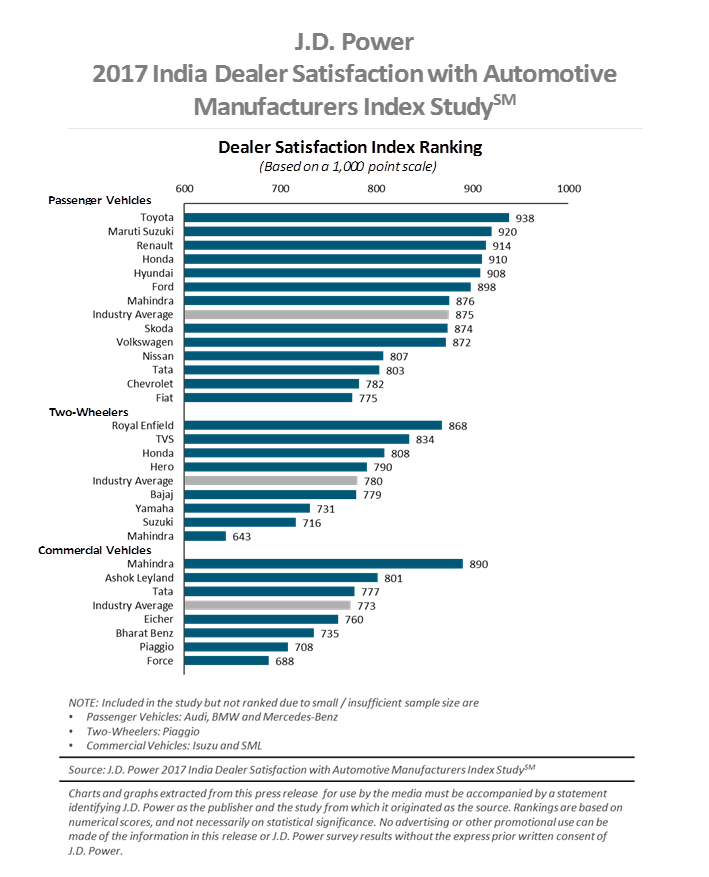