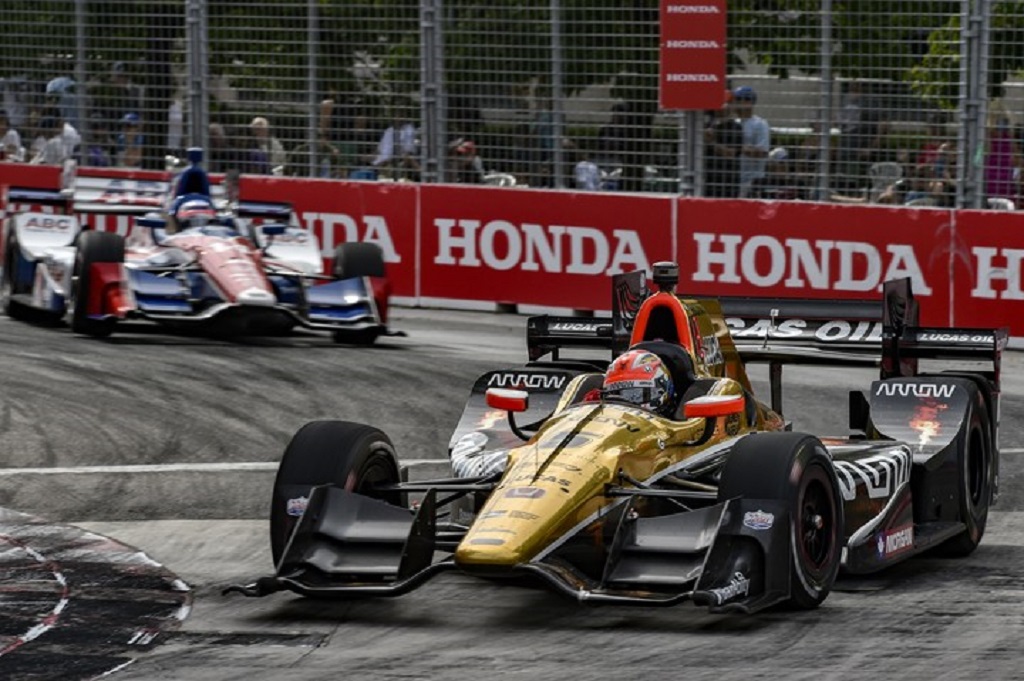 Taking advantage of track position and a well-timed caution flag, James Hinchcliffe thrilled his hometown fans with a third-place finish Sunday at the Honda Indy Toronto. It was Hinchcliffe’s second Verizon IndyCar Series podium of 2016 and best result since finishing third at the Angie’s List Grand Prix of Indianapolis in May.

Starting sixth, Hinchcliffe survived jostling for position through the opening laps, but faded to the second half of the top 10 runners through the middle portion of the 85-lap, temporary street circuit contest. Making an early final pit stop, on Lap 55, proved to be the small break Hinchcliffe and his Schmidt Peterson Motorsports Honda needed, as the caution flag waved just three laps later. Those who had not already pitted were forced to make their final stops during the caution, resulting in significant shuffling of the running order.

When the green flag waved on Lap 62, Hinchcliffe was running third behind leaders Tony Kanaan and Will Power. On a similar strategy, Takuma Sato emerged in fourth for A.J. Foyt racing, with Mikhail Aleshin seventh in the second Schmidt Peterson entry. Kanaan, however, needed to make one final stop for fuel, doing so on Lap 76, as did sixth-running Spencer Pigot.

Quick all weekend in Toronto, Jack Hawksworth appeared headed for his best finish of 2016 in his A.J. Foyt Racing Honda, but contact with Simon Pagenaud on Lap 82 sent him into the wall, bringing out the final caution of the race. With the waving of the green and white flags to begin the final lap, Hinchcliffe held off Kanaan to finish third, with Sato fifth and an opportunistic Aleshin rounding out the top six.

Video recaps from this weekend’s Honda Verizon IndyCar Series activities in Toronto are being posted on the “Honda Racing/HPD” YouTube channel. Produced by the Carolinas Production Group, the video packages can be found at:https://www.youtube.com/HondaRacingHPDTV.

The Verizon IndyCar Series now takes a week off before resuming July 31 with Honda’s midwestern “home” race, the Honda Indy 200 at the Mid-Ohio Sports Car Course in Lexington, Ohio.

James Hinchcliffe (#5 Schmidt Peterson Motorsports Honda) started 6th, finished 3rd, career best Toronto finish: “A great end to the day, obviously. We finally caught a lucky break in Toronto.  We didn’t have the best car on ‘blacks’ [standard compound tires], but we were really good on ‘reds’ [softer, option tires] at the start. Some guys were throwing some elbows and there was a bit of bump-and-grinding at the beginning, but we were able to maintain position.  On the blacks, with the track temperature going up [mid-race], we were really struggling.  But as the cloud cover came out in that last stint, the track really kind of came to us. We pitted and luckily just caught that yellow. Like I said, it’s the first time I’ve had a lucky break in this city, so we’re happy to take it. Huge props to the Arrow Electronics boys in the pits because we made up some spots there and to get the podium here in my hometown… this is awesome. This is one of the coolest days ever. There’s going to be a party tonight in ‘Hinchtown’ for sure.”

Mikhail Aleshin (#7 Schmidt Peterson Motorsports Honda) started 10th, finished 6th: “The team did an amazing job and that’s what allowed me to be in the top six in the SMP Racing car. Sixth place is great for the points championship and we’re going to aim for even more next time. Thanks to the SMP crew and now we’ll focus on Mid-Ohio.”

Art St. Cyr (President, Honda Performance Development) on today’s race in Toronto: “It was a strange race, with the timing of the cautions. You needed both pit strategy and outright speed to be a factor in the race. Congratulations to ‘Hinch’ for coming through when it mattered the most, and to the entire Schmidt Peterson team, with Mikhail’s sixth-place finish. Takuma’s run to fifth, as well as Marco Andretti’s 10th-place finish after starting 22nd, are also worthy of note. HPD and our teams are now squarely focused on our hometown race at Mid-Ohio in two weeks.”