New Delhi, November 22, 2016: After ambivalence and uncertainty following the announcement of demonetisation earlier this month, prospective domestic carbuyers are showing signs of return, searching online for their favoured set of wheels, according to traffic data analyses by CarDekho.com, India’s leading auto portal. However, traffic is currently choppy and erratic, with its own sets of highs and lows.

Shobhit Mathur, Director – Strategy, CarDekho: “Although consumption-led sectors are expected to bear the impact of the liquidity crunch, our analyses highlight that car sales and purchase are likely to be cushioned as financing through bank loans play a significant role within the four-wheeler segment. There are apprehensions of disruptions in the rural market — substantial part of the business here is governed by cash transactions — but that would be of temporary nature.” 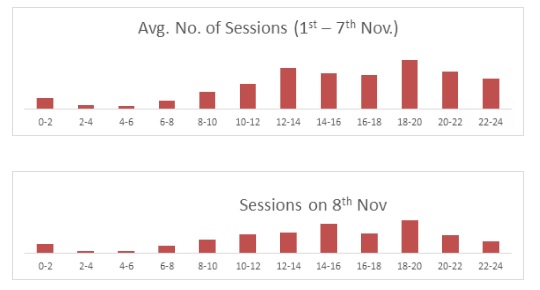 The data shows a sharp decline of 27% in platform traffic after the government announced the withdrawal of 500 and 1000-rupee notes at about 8 pm on November 8th. WAP or mobile-based website traffic was the most affected. Hourly WAP sessions on CarDekho.com  dropped nearly 50% on November 8 from the previous day’s peak traffic. The overall app traffic was largely unaffected by the announcement. 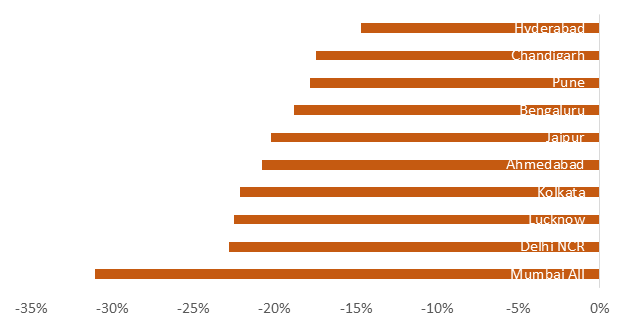 The CarDekho analyses also revealed online traffic was impacted the most in the country’s Financial Capital (a drop of over 31%). Online searches and comparisons for cars in Delhi-NCR fell by 24%, closely followed by Lucknow (23.5%) and Kolkata (22.5%).

However, with the initial scurry to exchange the devalued notes behind us, prospective customers now have some time off from managing the immediate cash shortage. They are now gradually returning. 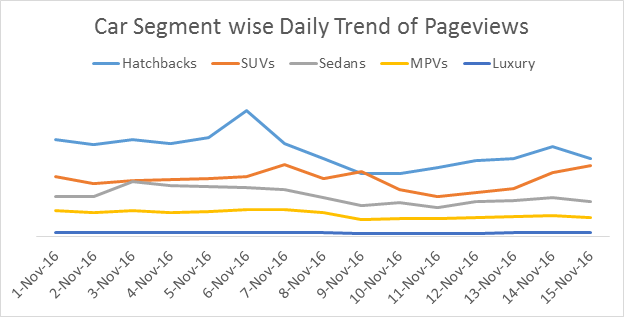 Hatchbacks and sedans are most affected segments. Soong after the government announcement, on November 9th, CarDekho pageviews of hatchbacks — the single-most popular segment among Indian families — slumped nearly half the peak of November 6th. This seemed a knee-jerk reaction to the sudden shortage of cash in an economy w here 85% of the currency notes were of the demonetised denominations. Hatchbacks are very popular among the middle class and the upwardly mobile population in India. In the demonetisation din, the population seemed to defer their immediate car-purchase plans for a time when liquidity situation in the market was more encouraging.

CarDekho’s traffic data analyses further indicated that on November 15th hatchback traffic gained ground and picked significantly. This indicates that the initial concerns had somewhat eased and online traffic was on a comeback trail.

The New and the Used 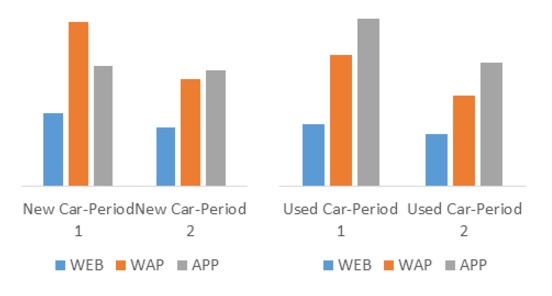 Online searches for automobiles reflect the general mood within the industry – traffic for both new and used car segments show considerable disturbance. Those looking for used-cars continue to favour the CarDekho app. Interestingly, the new-car searchers seem to have found a new liking for the app. Earlier, WAP dominated the sub-segment.

The dip in the old-car search is considerably significant and reflects the industry’s forecast that the segment, being the most cash-dependent, has felt the maximum impact of demonetisation and will feel further. The average traffic for used cars witnessed significant drops across CarDekho.com’s Web, WAP and app platforms between November 9 and November 15, compared to the corresponding five-day period before the government announcement.

The traffic data analyses indicates 20% and 30% downslide in new- and used-car segments, respectively.

CarDekho.com is a flagship portal of Girnar Software Pvt. Ltd. founded in March 2008. CarDekho.com is today India’s most popular and leading auto portal catering to the aspiring buyers, the proud owners, the auto enthusiasts and die-hard fans and dealers of cars across the country. The company acquired Gaadi.com, Zigwheels.com, Buying IQ and Drishya360s. The auto portals together draw close to 33 million visits per month with 22 million unique visitors per month. Girnar Software is a focused IT Company working on offshore products and outsourced software development. The company concluded its Series B funding in Jan 2015, picking up Rs300+ crores with two Hong Kong based investors Hillhouse and Tybourne besides existing investor Sequoia. Google Capital invested in the company in March 2016. It also bagged funding from Mr Ratan Tata and one of the largest banks HDFC. GirnarSoft is now valued at Rs 2500+ crores. The group’s vision is to be a multi-billion dollar company by 2021 with global footprint.

CarDekho is the ‘Best’ and ‘Most Popular’ auto website

Double distinction for numero uno portal at the prestigious Website of the Year India 2016 awards CarDekho.com, India’s leading auto portal has been named the Best Website as well as the Most Popular automotive portal […]

Auto journalist & subject veteran joins CarDekho and associated portals to drive content GirnarSoft has announced the appointment of Kartikeya Singhee as the Group Editorial Head. Kartikeya will be in charge of editorial content for […]