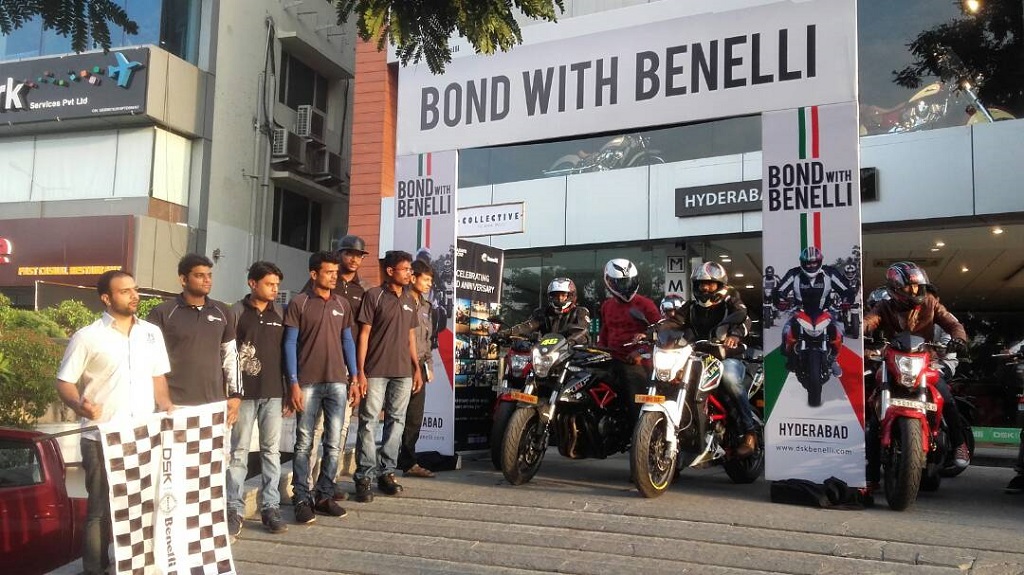 DSK Benelli riders participate across the two cities, making the rides a phenomenal success yet again!

New Delhi, 25 May, 2017: A pleasant balmy morning with golden colour scattering over the sky as a group of bikers prepare themselves for the perfect treat… an adrenaline-rich drive with others who share their passion for powerful bikes. Beneath the roaring engines and broad jovial faces was a name printed in bold – ‘DSK Benelli’. Offering unparalleled delight to the biking aficionados of Kolkata and Hyderabad, the premier superbike brand organised ‘DSK Benelli – Bond with Benelli Ride’ on Sunday, 21st of May across the two cities.

Benelli owners in Kolkata and Hyderabad participated in the ride with great enthusiasm for Super Biking. The event in Kolkata was flagged off from DSK Benelli – Kolkata Showroom at Ecosuite Business Tower in New Town, Rajarhant at 6.30 AM. For Bond with Benelli’ excursion in Hyderabad, the tour followed a scenic roadmap highway/region after flagging off from DSK Benelli – Hyderabad showroom in Jubilee Hill at 6.30 AM. The event received a thumping presence of Benelli riders from in and around the city. 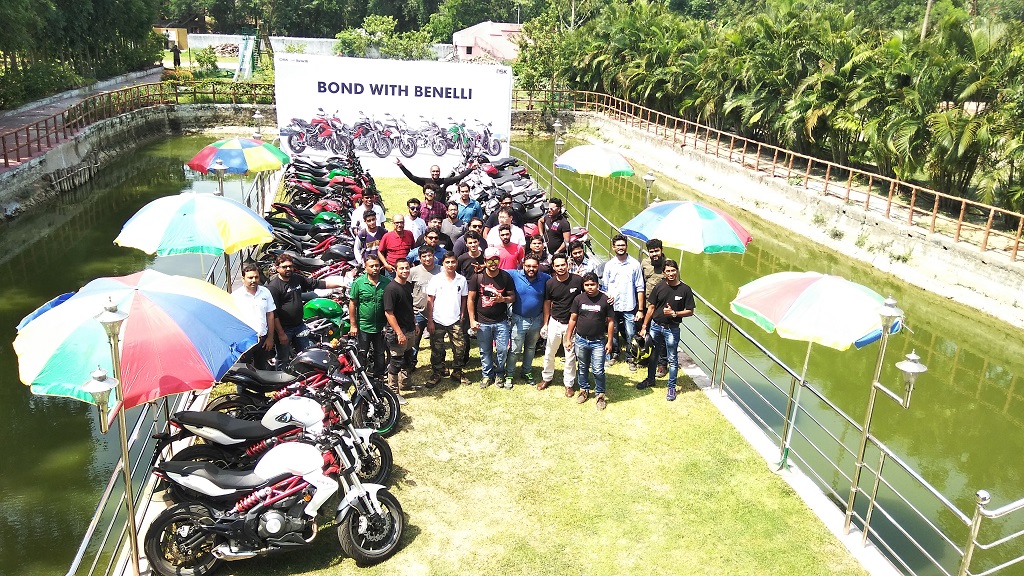 Mr. Shirish Kulkarni, Chairman, DSK Motowheels said, “All a biker needs is a picturesque road that leads to nowhere… and nothing can complement it better than a group of other bikers who share the same passion. ‘Bond with Benelli’ was aimed to satiate the passion of every biker who longs for the revving of a billowing engine. Since the announcement of the event, we received a phenomenal response from the ardent bikers of the two cities and we are very delighted that the initiative was well received by the DSK Benelli biking enthusiasts. We will also be organising similar events at various other cities across the country.”

‘DSK Benelli – Bond with Benelli Ride’ is an initiative undertaken by the legendary Italian superbike brand Benelli and its Indian counterpart DSK Motowheels, one of India’s most well-established and strongest players in the superbike industry. The touring event’s success has yet again carved the brand’s superiority within its domain.

Established in 2012, DSK Motowheels, a part of the DSK Group (Diversified business group with a turnover of over Rs. 5000 crores) forayed into the growing automobile sector by entering the niche segment of powerful and aspirational bikes. Taking forward the company’s rich legacy of dynamic entrepreneurship, Shirish Kulkarni, Chairman DSK Motowheels, spearheads the brand‘s operations in India with the primary objective of providing a world class super biking experience.

As often happens, the history of great industries is born in garages. In our case this is the “Benelli Garage”, where, in 1911, the 6 Benelli brothers Giuseppe, Giovanni, Francesco, Filippo, Domenico and Antonio, known as “Tonino”, repaired and manufactured motorcycle parts. In 1921 the ‘Velomotore’ was created: a single cylinder two stroke 75cc bike adapted to a bicycle frame and the following year it was the turn of the 98cc ‘Motoleggera’, immediately appreciated by the public of that time. The first real Benelli motorcycle, a 175cc model, ridden by Tonino, proved immediately to be a winner in the world of competition. Here began a long list of glorious moments, with more than 1000 victories in the Italian and European Championships and two World Titles won in 1950 and 1969.

Many legendary riders have ridden Benelli motorcycles. Besides Tonino, the owner of the company, the Italian riders Ambrosini, Grassetti, Campanelli, Provini, Pasohni, Villa and the internationals Saarinen, Hailwood and Carruthers. At the end of the 60’s the last motorcycle of the family owned company was born; the Tornado 650 which developed 50 hp at 7000 rpm, and easily  surpassed 170 km/h. Later the first ownership change took place, but motorcycle production continued in Pesaro with the ground breaking in line 6 cylinder 750 and 900cc Sei’s which were manufactured up until the early 1980’s. In 2001 the production of the first all new in-line triple powered range began, with the fully faired supersport Tornado 899cc Limited Edition. The addition of the Tornado Naked Tre or TNT for short, and subsequently the Tre-K in both 899 and 1131 cc variants meant that Benelli was truly back in the market of large capacity sports motorcycles. Today Benelli is part of the Qianjiang (QJ) Group, a corporation which produces more than 1.2 million two wheelers per annum. QJ, wishing to respect the tradition of passion which has always guided the history of the Italian brand, will continue manufacturing bikes in Pesaro, the traditional home of Benelli Motorcycles.

Unparalleled performance now available with a supreme safety feature! DSK Motowheels, one of the most established and strongest players in the superbike segment, in association with the legendary Italian superbike brand, Benelli, has launched the […]