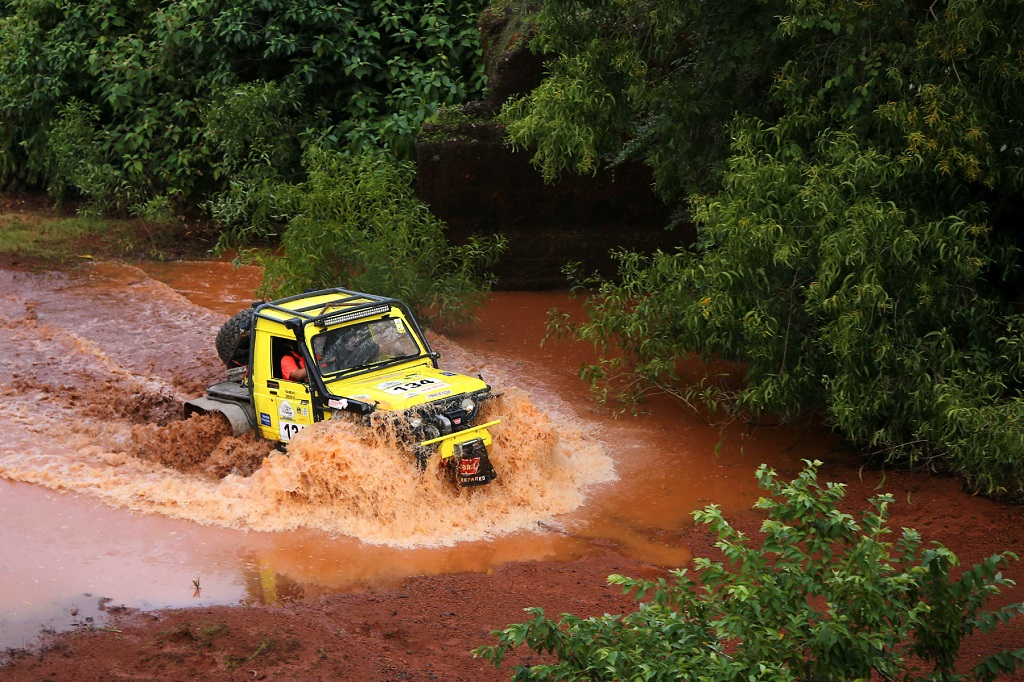 Virdi gets monetary benefits of up to $8,000, including an automatic entry to RFC Global Series 2017 Finale to be held in Malaysia later this year

Dona Paula, July 30, 2017: After a week-long nail biting competition, Gurmeet Virdi and co-driver Kirpal Singh Tung of Gerrari Offroaders Chandigarh have emerged as the Force Gurkha RFC India 2017 Overall Champions with a total score of 2019 points out of 2600. Gurmeet successfully managed to defend his title and is the only Indian driver till date who has won the country’s toughest off-road motorsport competition since its launch in 2014. The overall second position was held by Jagat Nanjappa (co-driver Chetan Changappa) of Team V5 Offroaders from Coorg with 1906 points. In an interesting turn of events, Gerrari Offroaders’ Sanbir Singh Dhaliwal (co-driver Gurpartap Singh) overtook Siddartha Santosh in the final moments to clinch third spot on the podium with 1685 points.

Gurmeet was elated on winning the country’s most coveted offroad motorsport trophy for the second time in a row. He said, “I am overjoyed that we’ve successfully managed to defend our title. It was a pretty tough competition, the positions kept on jumbling throughout, but we are happy that we came out victorious. There was no pressure throughout the event but the last stage of the competition gave me some serious chills as the competition was really close. It’s the first time that our club Gerrari Offroaders has clinched two positions on the podium in RFC India. Overall, I couldn’t have been happier.”

As the top Indian driver of the competition, Gurmeet will get monetary benefits of up to $8,000. This includes the automatic fully paid-for entry in the RFC 2017 Grand Final in Malaysia that is worth $3,900 and the travel expenses amounting to around $1,100. Moreover, Cougar Motorsport will contribute up to $3,000 towards the cost of arranging the competition vehicle for participating in the Mother Event in Malaysia, to be held at the end of the year.

This is the second consecutive year when veteran Indian rallyist Jagat Nanjappa competed in RFC India. He is satisfied about the fact that he has risen up from last year’s eighth position to the second position this year. He said, “This year it turned out to be a brilliant competition amongst the top three vehicles throughout the event. The previous year’s winner has defended his title with full force and I congratulate him on his superb performance. With a basic jeep and limited service resources, we pulled out the first position in our category (1611 cc -3010 cc Diesel) and an overall second position. At the end of the day, I feel it was a healthy and a strong competition and we are extremely joyous to be on the RFC India 2017 podium.”

As per Mr. Ashish Gupta, the Founder & Director of Cougar Motorsport Pvt. Ltd., the organizers of RFC India, “We witnessed an unprecedented level of competition this year. With the enhanced toughness quotient of the Special Stages and addition of the night stages, I expected the competition to be intense and I am happy that’s exactly what it turned out to be. The superior performances showcased by some of the drivers this year makes me believe that the offroading culture in our country has matured considerably and Indian offroaders are all-set to give a tough time to the best drivers in the international arena. I congratulate all the participants at RFC India 2017 for their exemplary display of offroading skills, valor, hard work and determination throughout the course of the competition.”

From being eliminated in the very first Special Stage of RFC India 2016 to making it on the podium this year, it has been a fairytale journey for Sanbir Singh Dhaliwal. He explains, “It’s been a really close call till the very last moment. The first few days I was concentrating on preserving my vehicle, I was observing how the course behaved. Things started to progress with each passing day. In the last 10 stages I picked up pace and the event finally concluded exactly the way I wanted it to. I cannot express my happiness in words.” Sanbir gives the full credit of his victory to his co-driver Gurpartap Singh Sandhu. He said, “I think the entire credit goes to Gurpartap who did a thankless job; as a co-driver you get called-on for things which are out of your control. But still he did an excellent job.”

The other key awards that have been announced include the Team Spirit Award to R Sumanth Shenoy from Chikmaglur, the Jungleman Award to Dr. Chaitanya Challa of Hyderabad Jeepers Adventure Association, Most Unique 4X4 Award to ‘The Hornet’ driven by Yamunanagar-based Sushant Saini, Environment Award to William Dwaine Jungen from Arizona (US), the Best Service Team Award to Gerrari Offroaders Chandigarh and the Team Award to Team BODA.

The newly instituted ‘Rookie of the Event’ award went to Goan driver Dattaraj Raut Dessai and his co-driver Pratik Prabhu Dessai for their exemplary performance out of all the 13 new teams that made their debut in the competition this year. The Lifetime Achievement Award was given to Mr. Vijay Kumar for his outstanding contribution to offroad motorsport in India. Apart from being a decorated offroader himself, Mr. Vijay is a mentor to Team BODA and his expertise is quite evident from the fact that Team BODA is now one of the finest in the entire offroading fraternity in India.

In a nail-biting competition, Bangalore’s Siddartha Santosh claims the second position and trails Virdi by only 1 point Quepem (Goa), July 28, 2017: Motorsport enthusiasts across the nation are finding it hard to control their […]