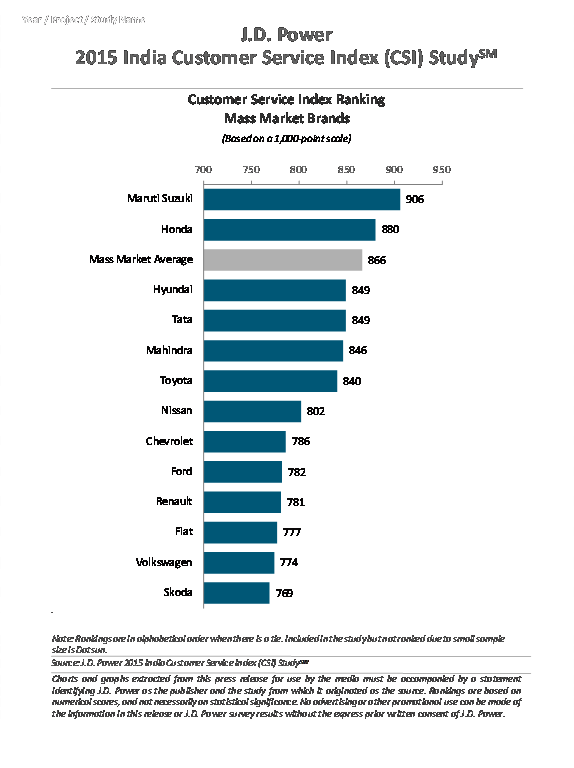 The study, now in its 19th year, examines satisfaction among vehicle owners who visit an authorized dealership service center for maintenance or repair work between the first 12 to 24 months of vehicle ownership. The study measures overall satisfaction in five factors (listed in order of importance): service quality (43%); vehicle pick-up (17%); service advisor (14%); service facility (14%); and service initiation (11%). Overall customer satisfaction is measured on a 1,000-point scale, with a higher score indicating higher satisfaction.

Overall service satisfaction in the mass market segment improves by 10 points to 866 in 2015 from 856 in 2014. The increase is attributed to strong improvements across all factors, with the greatest improvement in service initiation (+14 points).

“Vehicle manufacturers aren’t just servicing cars today; they’re going the extra mile to provide an after-sales experience that is truly memorable and satisfying for their customers,” said Mohit Arora, executive director, J.D. Power. “We’re seeing an increase in manufacturers that are focused on delivering a high-quality after-sales experience to customers. With enhanced dealership facilities, better network reach and rigor in process implementation, dealerships have been able to effectively manage and deliver on customer expectations.”

Rankings
Maruti Suzuki ranks highest in satisfaction with after-sales customer service among mass market brands for a 16th consecutive year, with a score of 906. Maruti Suzuki performs well across all factors, with the greatest improvements in service initiation followed by service facility. Honda (880) ranks second and is the most improved nameplate in the study.

Just 1 in 6 customers indicate their dealership picked up and dropped off their vehicle from their desired location. Providing the pick-up and drop-off service has a significant impact on satisfaction, rising 20 points above the overall mass market average when this occurs (886 vs. 866, respectively). Additionally, dealerships are offering more amenities at their service centers for their customers’ convenience, including air-conditioned waiting lounges, Internet access, TV, comfortable seating space, refreshment counters and valet parking. Satisfaction among customers who experience one or more of these amenities increases by 42 points to 908, compared with 852 when they don’t.

The 2015 India Customer Service Index Study is based on evaluations from 7,468 vehicle owners. The study was fielded from May through August 2015 and includes owners who purchased their vehicle between May 2013 and August 2014. 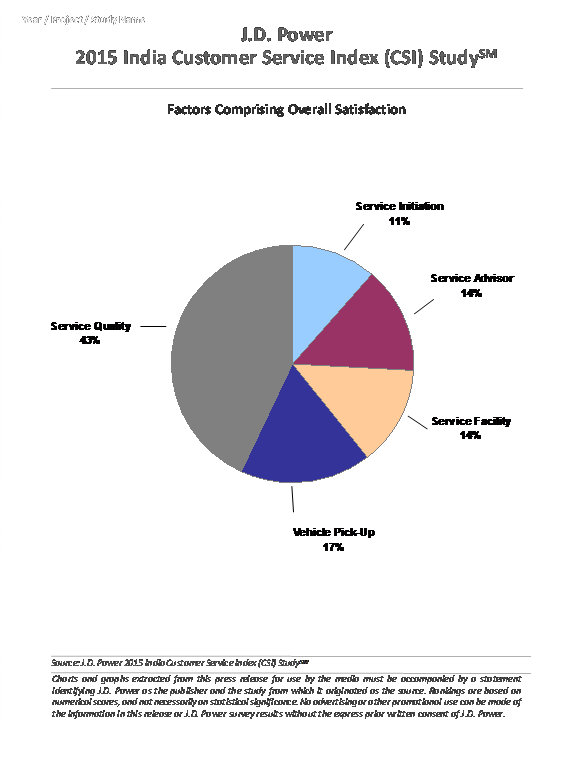 The number of initial quality problems reported by two-wheeler owners in India has declined by a significant 14 problems per 100 vehicles (-14 PP100), driven primarily by a reduction in engine-related problems, according to the […]