Long-term vehicle dependability in India improves as nearly half of all car owners indicate not experiencing any problems with their vehicle, according to the J.D. Power 2016 India Vehicle Dependability StudySM (VDS), released today.
The study, in its ninth year, measures problems experienced by original owners of 2.5- to 3.5-year-old vehicles in 169 different problem symptoms across nine vehicle categories. Overall dependability is based on the number of problems reported per 100 vehicles (PP100), with a lower score reflecting higher long-term vehicle quality. This study provides information about the quality of vehicles that are nearing the end of their warranty, and owners are assuming the responsibility for repair costs.
Overall vehicle dependability has made steady gains over the last three years with total reported problems standing at 185 PP100 in 2016, improving from 206 PP100 in 2015 and 218 in 2014. Furthermore, the proportion of owners who had taken their cars in for unexpected repairs this year has also declined since 2014 (27% vs. 37%, respectively). Owners whose vehicle needs unexpected repair work report more than double the number of problems than do those whose vehicle does not need such work.
The study also finds that while diesel vehicles continue to have more problems than petrol vehicles, the gap between them has narrowed marginally year over year, to 27 PP100 in 2016 from 29 PP100 in 2015. But more significant is the rate at which diesel vehicles are outpacing petrol vehicles in minimizing the occurrence of unexpected repairs. The incidence of unexpected repairs for diesel vehicles has decreased to 29% in 2016 from 41% in 2014, while the incidence for petrol vehicles has fallen to 25% in 2016 from 35% in 2014.
“Continuous improvements in vehicle quality are leading to fewer build quality issues and therefore fewer unexpected repairs in the first 2.5 to 3.5 years of a vehicle’s life,” said Mohit Arora, executive director at J.D. Power, Singapore. “Over the last few years diesel passenger cars have improved tremendously, as fewer owners are reporting quality issues with their vehicle than they were a decade ago.”
Among the nine problem categories that encompass overall long-term vehicle dependability, driving experience accounts for more than 20% of all problems reported by owners. Compared with last year, owners report fewer problems in this category in 2016, with fewer issues related to strut/suspension/shock absorber and excessive or uneven tire wear being reported.
“Vehicles in India are operated under a variety of road and weather conditions that lead to varying degrees of quality deterioration which affects overall owner satisfaction and word-of-mouth recommendations,” said Shantanu Nandi Majumdar, director at J.D. Power, Singapore. “It is therefore important for manufacturers to understand and minimize this fact by designing products to not only achieve high levels of initial quality but also attain higher levels of longer-term reliability and durability.”

About the Study
The 2016 India Vehicle Dependability Study (VDS) is based on evaluations from 7,717 original owners who purchased a new vehicle between July 2012 and September 2013. The study includes 70 models covering 15 nameplates and was fielded from January through April 2016 in 30 cities across India. The VDS is one of two J.D. Power automotive quality studies for the India market. The 2016 India Initial Quality Study (IQS), which measures problems of new vehicles at 2-6 months of ownership, will be published in November.
The nine vehicle categories being evaluated are: vehicle exterior; driving experience; features, controls and displays (FCD); audio and entertainment; seats; heating, ventilation and air conditioning (HVAC); vehicle interior; engine; and transmission. 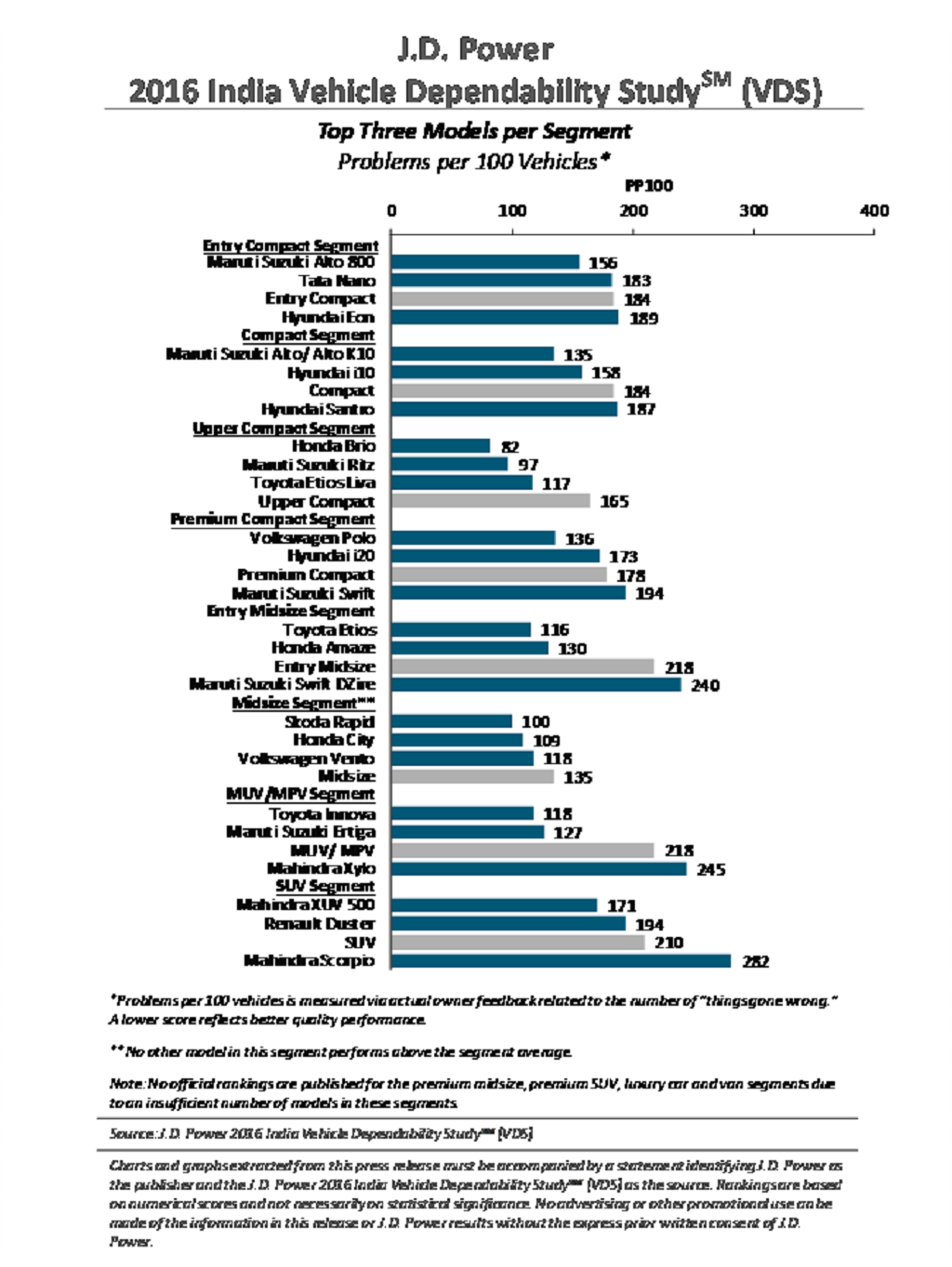 The number of initial quality problems reported by two-wheeler owners in India has declined by a significant 14 problems per 100 vehicles (-14 PP100), driven primarily by a reduction in engine-related problems, according to the […]

Nearly half of all automotive dealers in India expect to be profitable in the 2016 financial year as the India passenger-car market begins to recover from an economic slowdown, according to the J.D. Power […]