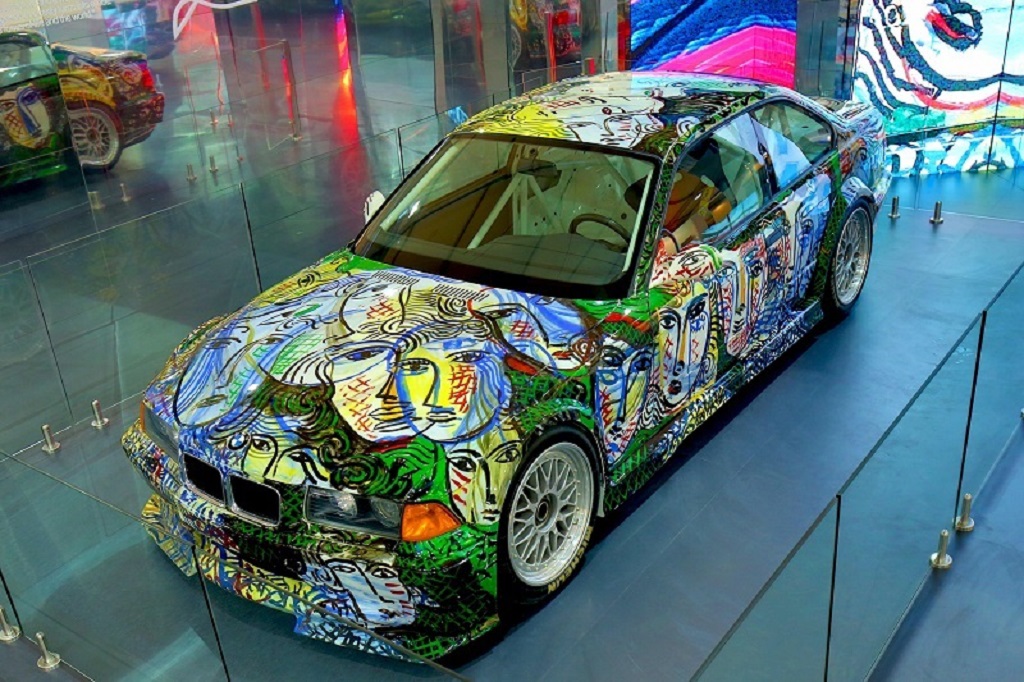 Delhi NCR, India – BMW Group India presents the 13th BMW Art Car created by Italy’s most renowned contemporary artist Sandro Chia. His creation will be exclusively exhibited from 2-5 February 2017 at the India Art Fair in New Delhi. Sandro Chia created the 13th Art Car for BMW in 1992 with the BMW M3 GTR which is celebrating its 25th anniversary in 2017.

The BMW Art Cars or the ‘Rolling Sculptures’ are original masterpieces of art that demonstrate an individual synthesis of artistic expression and automobile design. Since 1975, eighteen prominent artists from across the world have created Art Cars on the basis of contemporary BMW automobiles of their times, all offering a wide range of artistic interpretations.

Mr. Frank Schloeder, President (act), BMW Group India said, “Cultural communication has been one of the long-standing commitments of BMW Group. The partnerships we build strengthen intercultural dialogue and create platforms for multidisciplinary exchange. The BMW Art Cars collection spans the work of prominent artists across continents. Together they form a mirror of contemporary culture, as exemplary as it is unique. Through the exclusive showcase of the BMW Art Car by Sandro Chia at the India Art Fair, we bring yet another coveted masterpiece of art closer to connoisseurs and patrons of art. Visitors will be able to discover the design and creative process of the 13th BMW Art Car at the India Art Fair 2017.” 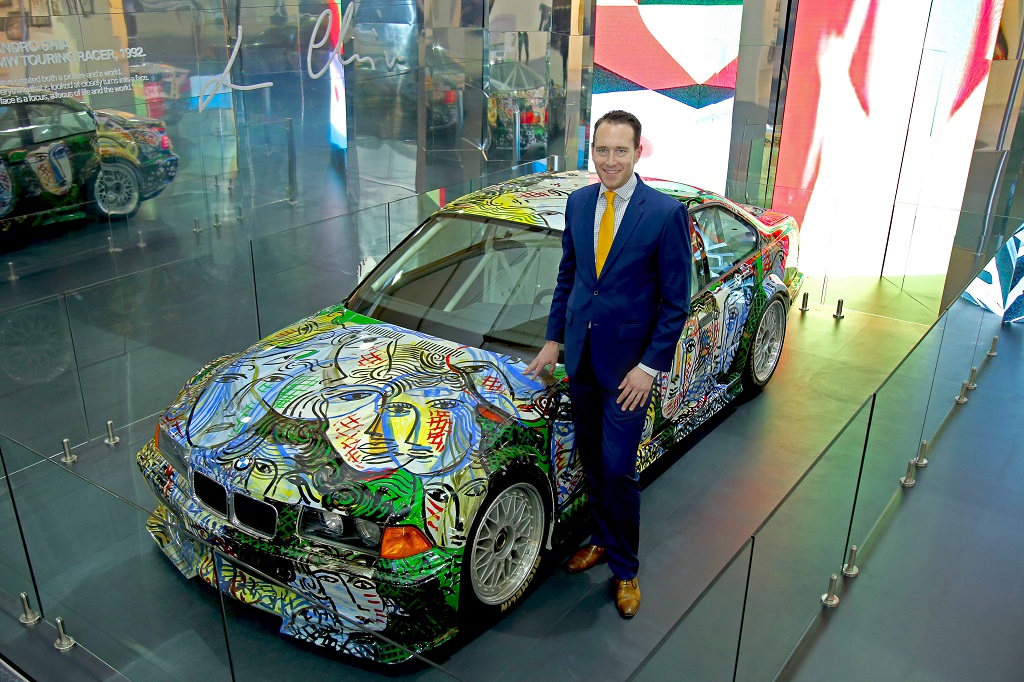 BMW Art Cars are an indispensable component and a core platform of BMW Group’s cultural engagement. They are unique creations combining automobiles, technology, design and art.

It was back in 1992 when Sandro Chia became the only Italian artist so far to be asked to put his mark on a BMW Art Car. The artist decided to give a BMW car a distinctive look; he created a combination of BMW’s design language and the artists’ perspective of multiple gazes of the onlooker and how the car reflects on them. 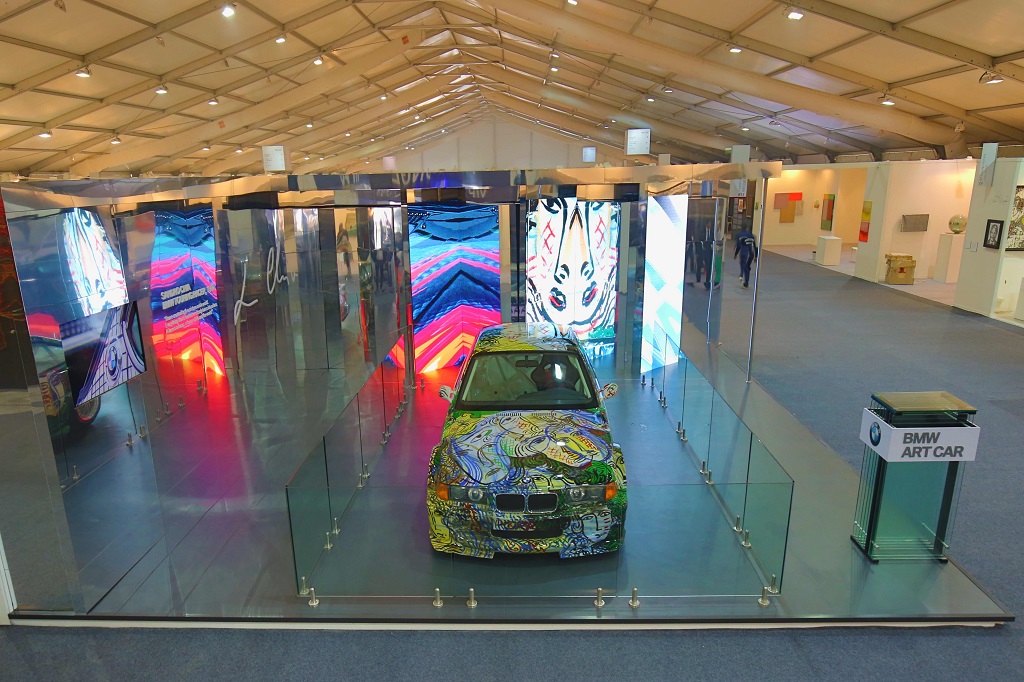 On 19 November 2015, at the celebration of the 40th anniversary of BMW Art Cars at Guggenheim Museum in New York, a jury of distinguished museum directors and curators chose Chinese artist Cao Fei and American artist John Baldessari to separately design the next BMW Art Cars in 2017 with the BMW M6 GT3 and BMW M6 GTLM.

The artist’s pictorial language is in light-hearted contrast to the often tough milieu of the big city, to which he reportedly feels himself drawn: figures of the mythical appearance parade themselves before us in a timeless, bucolic Arcadian setting.

“I have created both a picture and a world. Everything that is looked at closely turns into a face. A face is a focus, a focus of life and the world.” Sandro Chia

“Paint me, paint me!” the racing car’s surface had called out to him, said Sandro Chia. So he started to paint, painted faces and a sea of intensive colours until the car’s whole bodywork had been completely covered. “The automobile is a much coveted object within our society”, said Sandro Chia commenting on his work. “It is the centre of attraction. People look at it. This car reflects those looks.” The design of the Art Car was not his first artistic involvement with an automobile. Even as a child he painted graffiti on cars.

Sandro Chia was born in 1946 in Florence. He now lives in New York, London and Tuscany. In the magnificent Renaissance city where he spent his childhood and youth he became familiar with great works of art in a relaxed, almost playful manner. The story goes that playing football there in squares laid out by the great Brunelleschi was an experience that never deserted him later in life.

During the 1970’s, Chia achieved prominence with significant one man exhibitions in Rome, Turin and Cologne. A scholarship enabled him to work for a year in Monchengladbach. By 1982, his works were being shown by the Guggenheim Museum in New York, at the ‘documenta 7’ in Kassel and at the ‘Zeitgeist’ exhibition in Berlin. He is regarded as one of the most significant artists in the Italian ‘Transavanguardia’, and sees himself as a neo-expressionist in whose figurative paintings traces of Carrà, de Chirico and Picasso but also of Mantegna and Giorgione can be found. A major exhibition held in the Berlin National Gallery during 1992 enabled art lovers to renew their acquaintances with this oeuvre and see various new works for the first time.

Since its inception, BMW Group India has participated in leading cultural engagements across the country. In 2007, two BMW Art Cars embellished by world renowned artists Andy Warhol (BMW M1, 1979) and Roy Lichtenstein (BMW 320i, 1977) were presented at the Jehangir Art Gallery in Mumbai. Since 2012, BMW partners with Kochi-Muziris Biennale, the contemporary art fair, which brings international artists to India and creates a global platform for Indian artists. In 2012-13, the innovative BMW Guggenheim Lab came to India. Based at Dr. Bhau Daji Lad Museum and conducted at six different sites in Mumbai, the lab organised six weeks of free program with diverse audience and communities addressing the challenges and conditions of the urban city.

For almost 50 years now, the BMW Group has initiated and engaged in over 100 cultural co-operations worldwide. The company places the main focus of its long-term commitment on contemporary and modern art, classical music and jazz as well as architecture and design. In 1972, three large-scale paintings were created by the artist Gerhard Richter specifically for the foyer of the BMW Group’s Munich headquarters. Since then, artists such as Andy Warhol, Jeff Koons, Daniel Barenboim, Jonas Kaufmann and architect Zaha Hadid have co-operated with BMW. Currently, female artist Cao Fei from China and American John Baldessari are creating the next two vehicles for the BMW Art Car Collection. Besides co-initiatives, such as BMW Tate Live, the BMW Art Journey and the ‘Opera for All’ concerts in Berlin, Munich and London, the company also partners with leading museums and art fairs as well as orchestras and opera houses around the world. The BMW Group takes absolute creative freedom in all its cultural activities – as this initiative is as essential for producing groundbreaking artistic work as it is for major innovations in a successful business.

With its three brands, BMW, MINI and Rolls-Royce, the BMW Group has its sight set firmly on the premium sector of the Indian automobile market. Along with automobiles and motorcycles, the BMW Group’s activities in India comprise of financial services for its premium clientele. Till date, BMW Group has invested 11.3 billion Indian Rupees (€ 167 million) in its subsidiaries in India. (BMW India –INR 4.9 billion (€ 69 million) and BMW Financial Services India – INR 6.4 billion (€ 98 million).

BMW India is a 100% subsidiary of the BMW Group and is headquartered in Gurgaon (National Capital Region). The wide range of BMW activities in India include a manufacturing plant in Chennai, a parts warehouse in Mumbai, a training centre in Gurgaon NCR and development of a dealer organisation across major metropolitan centres of the country.

The fastest, loudest and most powerful MINI available in India. The MINI Cooper S Carbon Edition launched exclusively on Amazon, establishing MINI as the first premium automotive brand in India to offer a limited edition […]