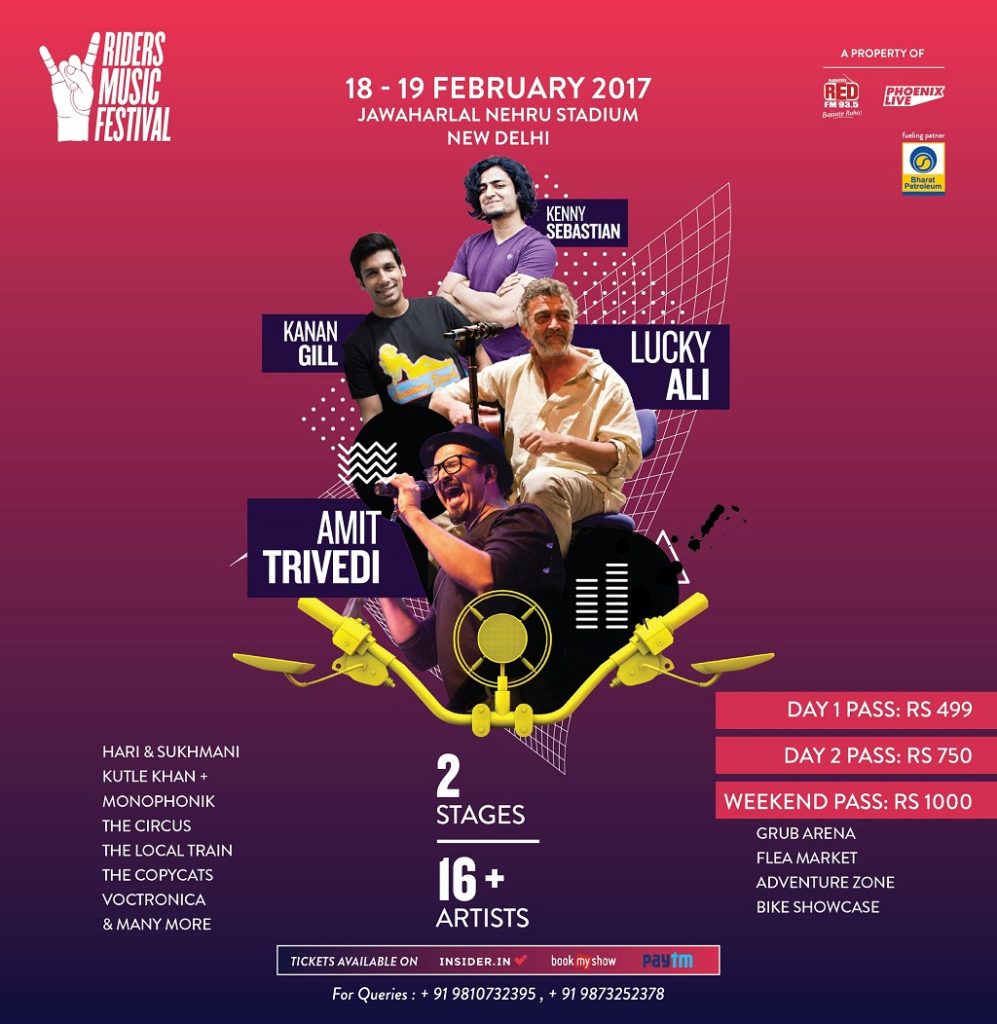 Delhiites gear up for this carefully curated festival with host of entertainment acts on 18 and 19 February 2017.

New Delhi, January 10, 2017: Red FM, India’s leading FM network today announced the revised dates for its new IP ‘Riders Music Festival’ which was postponed due to demonetization. Earlier scheduled for 3rd and 4thDecember 2016, the festival will now take place on 18th and 19th February 2017 at Jawahar Lal Nehru Stadium Grounds, Delhi. The festival will enthrall audiences with live performances by some of India’s most iconic and popular artists such as Amit Trivedi, Lucky Ali, Kenny Sebastian, Kanan Gill, Hari & Sukhmani, Kutle Khan, Voctronica, Local Train and many more to keep Delhiites excited all throughout the weekend. The weekend pass is very attractively priced at INR 1000, while the Saturday and Sunday Passes are priced at INR 499 and INR 750 respectively. The tickets are live on Insider.In, Bookmyshow, PAYTM, Cleartrip and  JustDial.

Commenting on the announcement of new dates for Rider’s Music Festival, Nisha Narayana, Red FM COO said, “In our endeavor to offer newer experiences to our listeners, we are thrilled to announce the new dates for Rider’s Music Festival. We are optimistic that by February the monetary situation in the country will improve enabling the crowd to relish the festival to its true potential. Delhi should look forward to a festival that represents freedom, celebrates individuality and passion with an audience which believes in Living it up.”

The festival packs in numerous attractions to entertain one and all from the non-biking community with an exciting line-up across genres;

Kenny Sebastian – Raised across different cities in India helped Kenneth Sebastian develop a keen sense of observation of culture, people and stereotypes, all of which have found its way into his comedy

Amit Trivedi – Composer, singer, and lyricist, known for his work in Bollywood for movies like Dear Zindagi, Udta Punjab, Shandaar, Dev D, Wake Up Sid, Lootera etc. will woo the audience with his melodious voice. He was featured in MTV’s popular music show, Coke Studio, which eventually went on to become a rage

Hari Sukhmani – Sukhmani Malik is a trained Hindustani classical vocalist and performer and Hari Singh is a multifaceted producer, vocalist, and audio engineer. They have been globe-trotting as a band since 2009. The band’s regular appearances on TV shows and radio broadcasts have made them a popular act among diverse audiences

Kanan Gill – Stand-up comedian, musician, writer, and blogger will land you in laughter, stomach aches and tears with his witty one-liners and powerful punches. His is sense of humor truly makes him unique and his charismatic presence on stage makes him a complete performer

Kutle Khan – A multi-talented folk musician from the rich and vibrant land of Rajasthan, Kutle Khan is a versatile composer, vocalist, and multi-instrumentalist. His performances are full of energy and verve

Lucky Ali – Best known for his soulful but strikingly simple ballad-style singing and melodious voice, his songs carry nostalgia and emotions that only hearts can feel. His song ‘O Sanam’ is considered by some to be one of the best indie-pop songs ever

The Local Train – The Local Train is the four member band from Delhi, India. Founded in 2009, they have performed all around India and are very popular among the youth. Their fresh original tracks went viral online taking them to the top of the Indie circuit and even beyond

Voctronica – Voctronica is India’s first all-vocal ensemble. The band was set up by world-renowned beatboxer, Shlomo (UK), along with MC Testament (UK), Sony Music India and British Council India. It is a melodious blend of beat-boxers, Indian Classical, Pop, Blues and Rock vocalists who collectively bring to you the real power of the human voice

93.5 RED FM, India’s Largest Radio Network has always believed in the philosophy and attitude of ‘Bajaate Raho!’ along with a music strategy of playing only Super Hit music, based on the internationally successful CHR (Contemporary Hit Radio) format. The brand has successfully launched new extensions- RED Mobile, RED Active, RED Live, and RED Digital, which are all independent IPRs with the same brand philosophy and attitude. One of the MOST AWARDED BRANDS in the industry, RED FM boasts of over 167 awards including the award for the BEST FM BRAND, BEST FM STATION, BEST RJs, etc.

Building up the momentum towards the Rider’s Music Festival first breakfast rides, kick started on 18 September 2016, at 5:30 am from Moolchand to Jewar Toll at Taj Expressway, Haryana. The ride saw over […]

Red FM and Phoenix Live collaborate to bring the first edition of ‘Riders Music Festival’ A celebration of the spirit of rides, music and brotherhood. A festival which is a melting pot for people who […]