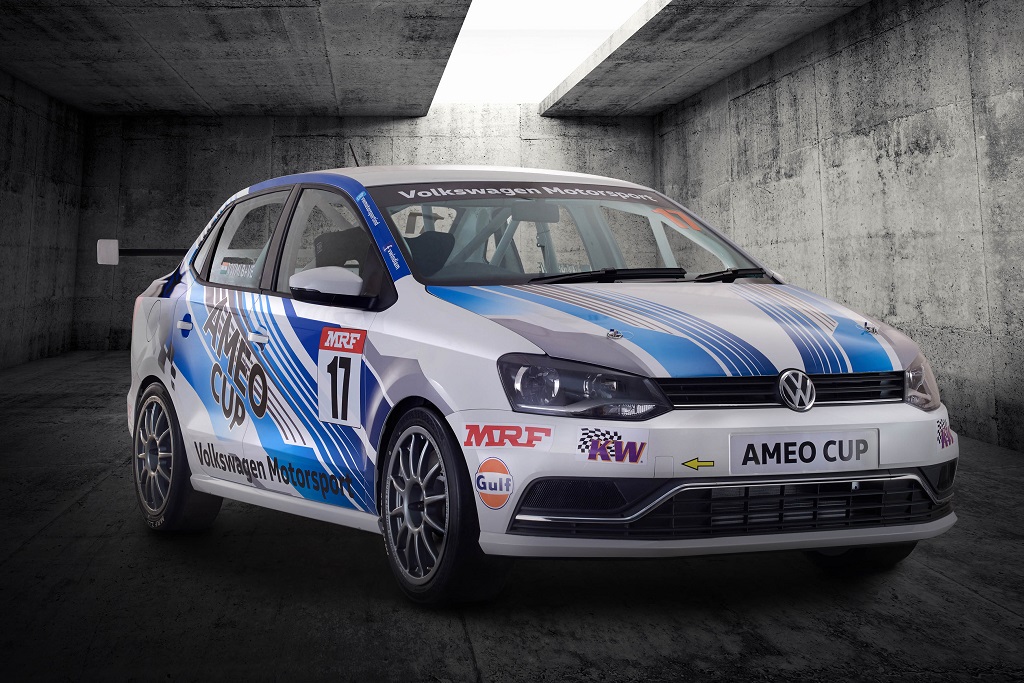 Pune, April 18, 2017: Volkswagen Motorsport India is gearing up for the Ameo Cup 2017 that will kick off at India’s racing circuits later this year. With the resounding success of the Vento Cup and the Polo Cup, Volkswagen Motorsport India aims to take its racing heritage to a new high with the Ameo Cup which will feature a race car that has been developed entirely at Volkswagen Pune Plant, for the first time. The all-new race machine boasts of major upgrades as compared to its predecessor, starting from the body shell itself all the way to the drivetrain, chassis and electronics.

The Ameo Cup race car shares its body with the road version of the Ameo while it borrows the engine from the GTI – a symbol of performance from the Volkswagen stable. It comes with a Turbocharged inline 4-cylinder engine that displaces 1798 cc and produces 205 PS @ 6100 rpm (power) and 320 Nm @ 3200-4600 rpm (torque). This engine is mated to a 6-speed sequential gearbox with steering-mounted paddle shifters. The ECU (Engine Control Unit) is completely new and has been independently calibrated and mapped to suit the new engine and the gearbox control system. The Ameo Cup race car is running a whole new suspension setup along with tyres that have been specifically developed for this car. 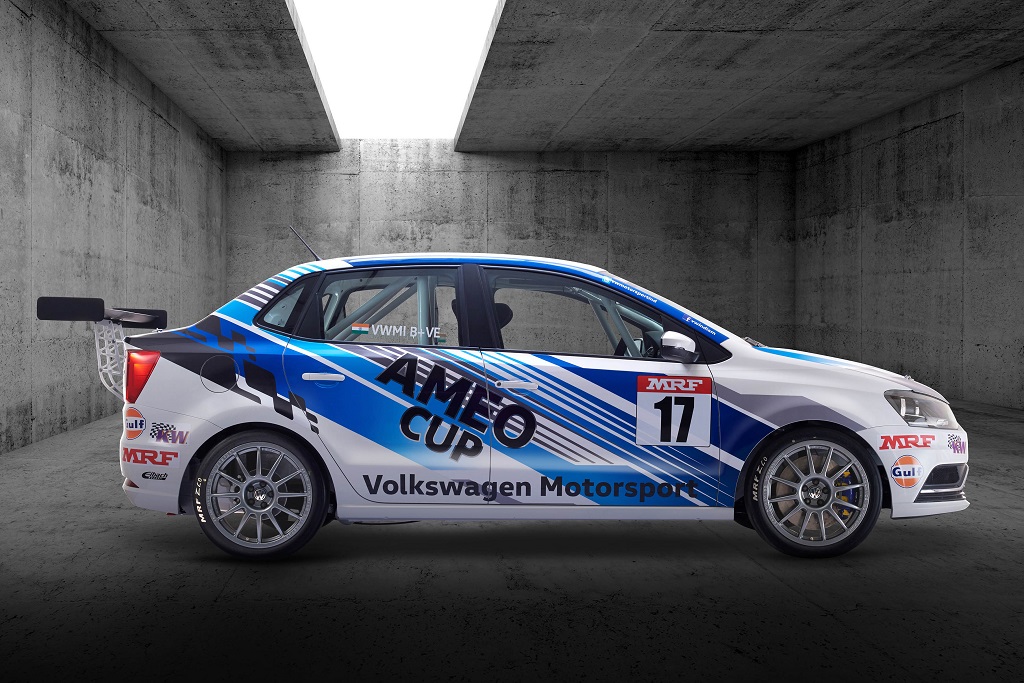 Dr. Andreas Lauermann, President and Managing Director Volkswagen India Private Limited said, “Volkswagen is committed to motorsport in India and with our premium one-make series we have helped develop some of the best racing talent in the country over the past seven years. With the Ameo Cup we have embarked upon yet another year of exciting races and this season is especially noteworthy as the motorsport team has developed the race car from ground up at the Volkswagen Pune Plant. With this, we continue our commitment to the sport and make our intentions clear – to offer the best racing technology in India”.

Mr. Sirish Vissa, Head of Volkswagen Motorsport India commented on the new Ameo Cup Car saying, “The car is unlike anything Indian motorsport has seen from the Volkswagen’s stable. It has more power and amazing handling, yet it is simple enough for budding racers to learn on. The race machine is at par with international standards and the new elements in the car make it possible to take our one-make series to a new high.”

Karthik Tharani, Volkswagen Motorsport India development and test driver added on the performance of the car, “The Ameo Cup race car is a very well sorted machine and this is evident with the test lap time of 01:51.780, which is 4.6 seconds quicker as compared to the Vento Cup race car. The Ameo Cup race car is an ideal race machine for amateurs and racers alike – it has enough to keep all racers engaged while challenging them time and again. I have been through the programme that Volkswagen Motorsport India has put together and I can only reassure the budding drivers that this is the best stepping stone into the real world of professional racing.”

The Ameo Cup 2017 season is scheduled to start in the month of June at Kari Motor Speedway near Coimbatore followed by couple of rounds at Madras Motor Race Track (MMRT) in Chennai and one round at Buddh International Circuit (BIC) near Greater Noida. 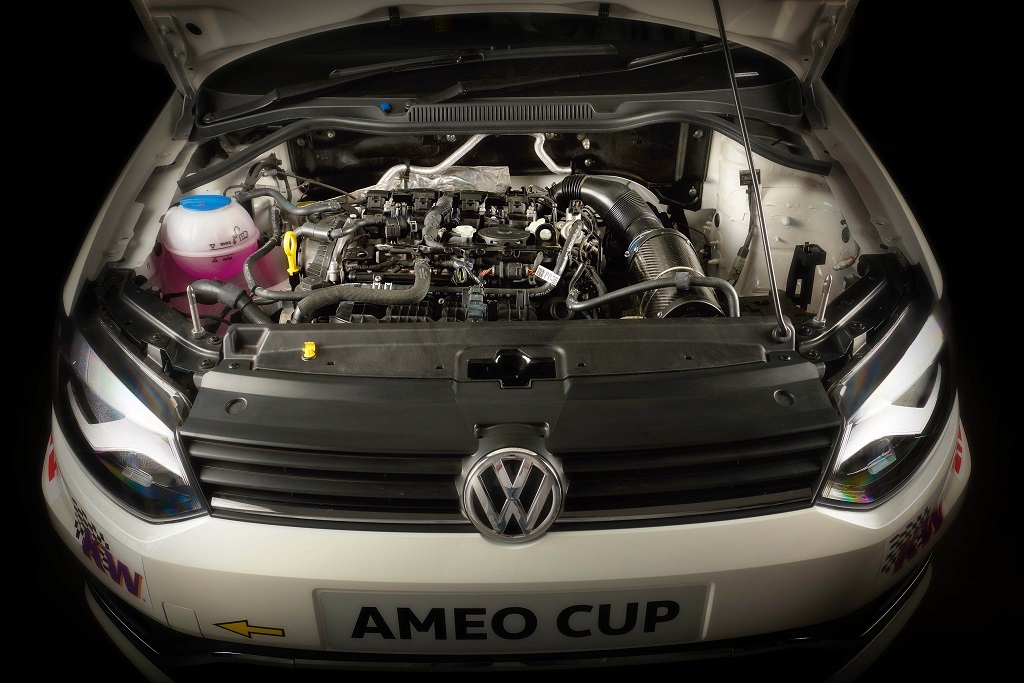 The Ameo Cup race car shares its wheelbase with the Polo and is shorter than the Vento Cup race car. Various components of the Ameo Cup Car such as the fire extinguisher, battery, and the windshield washer tank have been reorganised to evenly distribute the weight of the chassis and achieve the progressive handling that its predecessor offered through a longer wheelbase. The new race car has different springs at the front and the rear along with torsional beam axle at the rear. This has helped the car keep positive characteristics of the Vento Cup race car alongside the very dynamic and responsive nature of Ameo Cup car’s shorter wheelbase. The valving of the KW damper has also been developed to suit the new MRF tyres along with the new 17” wheels which are lighter than the ones used previously.

The EA888 1.8 TSI engine on the Ameo Cup race car is the same as the one that powers the Volkswagen GTI but has been tuned to deliver an improved torque curve suited to the race track. MoTeC engine management system has been used to develop the engine in-house which is supported by a new light weight flywheel and clutch from Sachs Race Engineering. This package has been specifically designed for this car.

A 6-speed sequential gearbox from 3MO has also been developed to match the high torque output of the engine. This is a change from the 6 speed DSG used previously. An electro-magnetic actuator has been used in the new race car for quick gear changes. This actuator also comes with the added safety to keep the driver from accidentally changing down extra gears.

The Ameo Cup race car gets new racing brake pads with a better and progressive bite. The car will be running 334 mm ventilated discs at front while 232 mm discs at the rear.

For the first time, Volkswagen Motorsport India has set up all of the strategy to manage the mapping and calibration of the engine, gearbox and shift actuator with the MoTeC M142 engine control unit (ECU). The ECU is paired with MoTeC C125 colour dash display and data logger which is capable of logging 120 MB and is also equipped with programmable shift lights. The Ameo Cup race car, unlike its predecessor lacks a fuse box and instead is fitted with MoTeC PDM 30 which carries out the power distribution on the new race machine and acts as a combination of the fuse box and body control module (BCM). 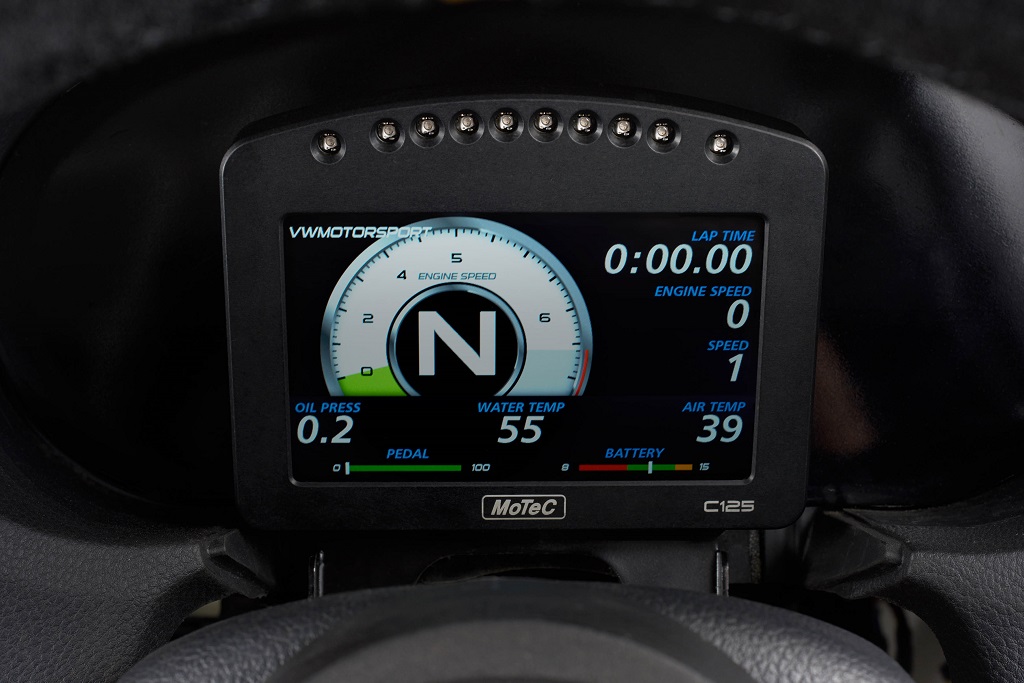 The Ameo Cup race car features a weld-in roll cage which is designed to optimize and enhance the safety of the driver along with chassis torsional rigidity. The roll cage extends from the front strut mounting tower to the rear damper mounts and is designed to the latest FIA specifications. The car is also equipped with seats and seatbelts from OMP racing while the fire suppression is handled by FIA approved SPA on-board extinguisher. The extinguisher and the main electrical cut-off are accessible from the inside as well as the outside of the car.