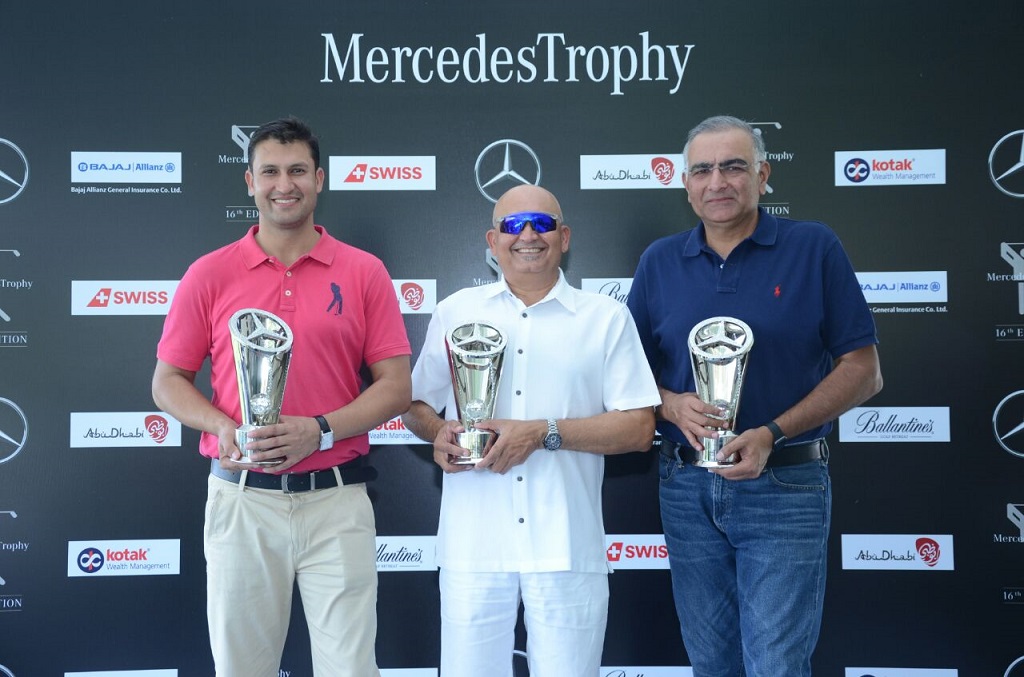 The National Final of the 16th Edition of MercedesTrophy culminated at the Oxford Golf & Country Club in Pune, today. After 23 days of exhilarating golfing action that covered 13 cities and more than 2500 golfers from around the country, three players Manish Jaitha, Ajit Parmar, Karamvir Yadav emerged winners & will represent Corporate India at the MercedesTrophy World Finals in September.

The three winners at the MercedesTrophy Finals will now compete against winners from 600 tournaments played in 60 countries across the world at the 27th edition of the MercedesTrophy World Finals in Stuttgart, Germany. The MercedesTrophy is one of the world’s most prestigious corporate golf tournaments. This illustrious event, with a legacy of 25 years, offers Indian golfers the opportunity to rendezvous with the greens while they rub their shoulders with some of the game’s most successful proponents internationally.

Speaking at the prize distribution ceremony, Mr. Roland S. Folger, Managing Director and CEO, Mercedes-Benz India said, ‘The MercedesTrophy is a renowned international golf tournament in the world and has witnessed an astounding success in India. The association of sporting prowess and lifestyle finesse has been the hallmark of the MercedesTrophy over the years. It attracts the cream of the country’s golfers and boasts to be one of the most celebrated sporting events in the golfing calendar in India. The participants of this tournament comprised distinguished achievers from all walks of life and many found this event a great occasion to meet and interact with fellow Mercedes-Benz owners. I am thankful to all our patrons who participated in this event and made it an exciting game of sport, glamour and glory. The top three winners will now participate in the MercedesTrophy World Finals in Stuttgart in September 2016 to compete against winners from across the world. I wish them all the very best for the grand finale. May the best keep winning.’

The MercedesTrophy, in its 16th edition commenced with the Mumbai qualifier in January and culminated with the last qualifier in Gurgaon in March. 40 winners emerged from the qualifiers that spanned across the length and breadth of the country. Offering the most luxurious customer experience and with an ever increasing participation, the MercedesTrophy in its 16th edition has become larger than ever before and has been instrumental in raising the standard of corporate golf in India.

The MercedesTrophy National Final was an 18 holes individual Stableford competition against 3/4th handicap. The three handicap categories were (1-11, 12-17 & 18-24) and were fiercely contested at the highly challenging Oxford Golf & Country Club.

Ravi Budhwar will travel to the British Open Championship in UK, in July and get a chance to play the Royal Troon Championship course. Hari Narayan of Mumbai, Dr. MS Ranganath of Bangalore, Harsimran Singh Saron from Chandigarh & T.S. Kahlon from Gurgaon have qualified for the Abu Dhabi Golf Skills Challenge.

About MercedesTrophy:
The MercedesTrophy has more than two decades of legacy as the biggest and finest golfing event in the world. Now in its 16th edition in India, the prestigious tournament offers Indian golfers the coveted opportunity to compete internationally even as they rub shoulders with some of the game’s most successful proponents. Globally, over 60,000 golfers from over 60 countries vie for the top honours in the tournament that defines sports, exclusivity, entertainment and glamour, with a class that epitomizes Mercedes-Benz.

• Luxe Drive, an engaging platform for customers, based on the three pillars of Adrenaline, Gourmet and Design mesmerized the luxury car enthusiasts in Bangalore • Mercedes-Benz has associated itself with ‘Gauri Khan Designs’ created […]

Nashik had a great weekend full of luxury and glamour with Luxe Drive, a unique customer engagement programme by Mercedes-Benz, based on three strong pillars of Adrenaline, Gourmet and Design On display were prominent designs […]