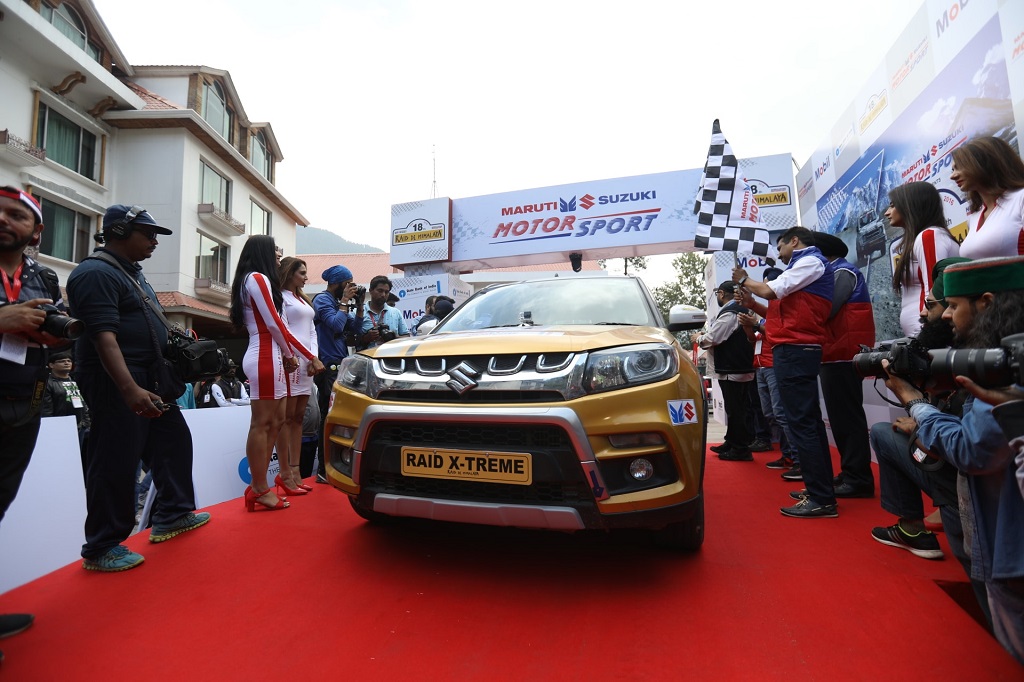 Maruti Suzuki India Limited, leader in passenger vehicles today flagged off the 18th edition of Maruti Suzuki Raid de Himalaya, the world’s highest arena rally. The rally this year will cross the challenging route of Kaza, traversing through Sarchu towards Leh over the course of 7 days. The route traverses around 2000 kms in the Himalayas.

Over 240 motorsport enthusiasts in 155 teams are participating in this rally which will culminate at Manali for the prize distribution ceremony on October 15th. The rally takes place at an extremely high altitude of upto 17,500 feet with temperatures as low as minus 15°C. These extreme conditions prove to be the ultimate test of vehicles and the mental and physical capabilities of the participants.

“Increasing participation of motorsports enthusiasts encourages us to strengthen the motorsports events”, he adds. “Raid de Himalaya in particular offers an unparalleled motorsport experience at high altitudes” he added.

The participants will compete in three categories- Cars Extreme, Bikes Extreme and Adventure Trial. A strict scrutiny check one day prior to the flag off is mandatory to ensure safety for all the participants.

After making its mark in TSD rallies across India, Maruti Suzuki compact SUV Vitara Brezza will make its debut in the Raid De Himalaya, this year.

Xtreme       Xtreme is the most intense form of motorsport rallying which requires the most intimate coordination between the participant and his machine. Participants in both cars and bikes category would be vying to gain a lead of even few seconds that would decide their fate in lifting the Maruti Suzuki Raid de Himalaya trophy. One thing is for sure, it’s not for the faint hearted.

Adventure  Adventure is the safest form of motorsport that ensures to retain the adventure of competitive motorsport especially for amateurs. The participants follow the Time Speed and Distance (TSD) format.

Maruti Suzuki Raid-de-Himalaya is one of the two off-road motor rallies from India listed in the annual motorsport calendar of Switzerland based Federation Internationale Automobile (FIA) and Federation Internationale Motorcyclisme (FIM). The Maruti Suzuki Raid De Himalaya will run in compliance with the International Sporting Code of the FIA, National Competition Rules (NCR) & General Prescriptions of the FMSCI. The rally is organized with the aim of conducting motor sporting events in the Himalayan regions of Himachal Pradesh, Jammu and Kashmir and Uttarakhand. Over 200 + qualified Scrutineers and Stewards who have current Scrutineer and Steward Licenses from the FMSCI will be making sure that rally sets some new standards this time.

Raid de Himalaya marks the pinnacle of Mobil’s three-rally association with Maruti Suzuki through 2016 Come October and the Himalayas will resound to the thunder of revved engines, as Maruti Suzuki India Limited (MSIL)’s hallmark […]