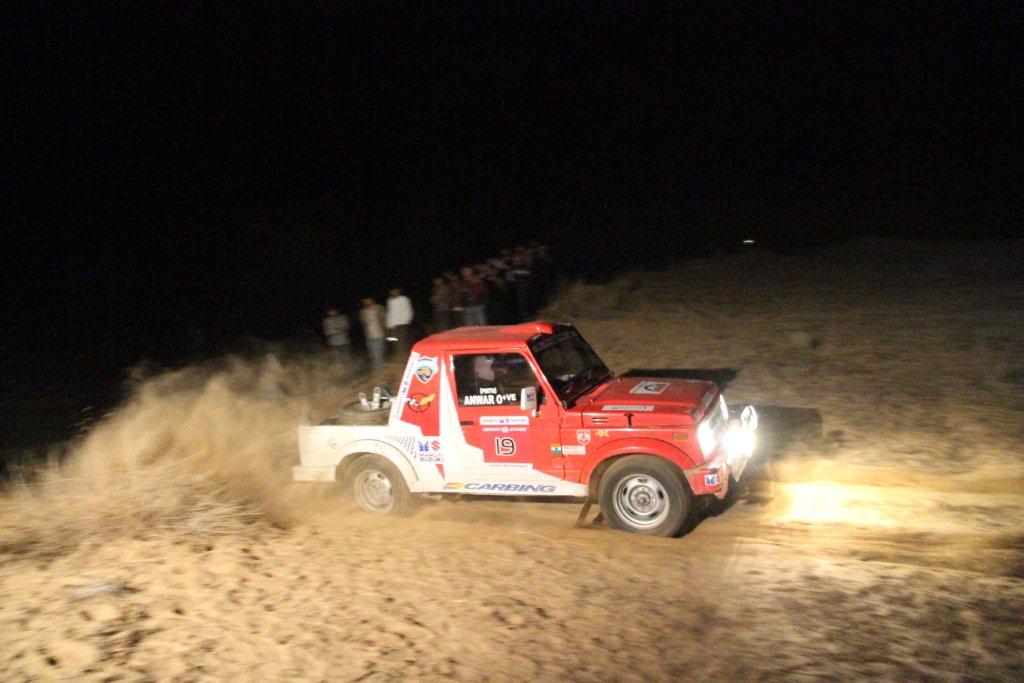 Bikaner, 19th Feb, 2013: The 11th Maruti Suzuki Desert Storm, one of the most anticipated motorsport rallies in the country completed its first leg today. The Rally which was flagged off from New Delhi amidst huge fervor and excitement on the 18th reached Sardarshahar at night and completed its first leg to enter Bikaner. Team Maruti’s Suresh Rana, once again, led the rallly, followed closely by Team Mahindra’s Lohit Urs and Sunny Sidhu.

The first leg, covered at a distance of 398 kilometers, was divided into Leg 1a and Leg 1b. After the flag-off in New Delhi, the rally entered Gidgichia, a small rural town in Rajasthan after which the rallyists drove past through towns like Maliksar, Lodsar, Malsisar, Kagasar, Nathwana and Hariyasar before finally entering Sardarshahar. The total distance covered in the first part of Leg 1 was approximately 173 kilometers.

The rally then embarked upon the second part of the first leg of the journey in Sardarshahar itself. The 224 kilometers journey saw the rallyists navigating through dust and toil in a bid to complete the expedition. The first day proved to be an interesting start for the rallysts as they found the depth of their driving abilities. The Maruti Suzuki Desert Storm Rally then made headway to northwest Rajasthan progressing towards Bikaner finally reaching the sandy city at 16:30 hrs IST.

The second leg of the Desert Storm, headed to Jaisalmer, will begin tomorrow at 6:00 hrs IST. The estimated distance for this leg is a total of 488 kilometers.

As an automobile leader, Maruti Suzuki has been promoting motor sports for over a decade now. To popularize action sport, the Maruti Suzuki motorsport calendar is packed with exciting motoring events.

Be it for a motorsport enthusiast, an amateur or a professional and irrespective of gender, there are events that offer the thrill and joy of motorsport to one and all.