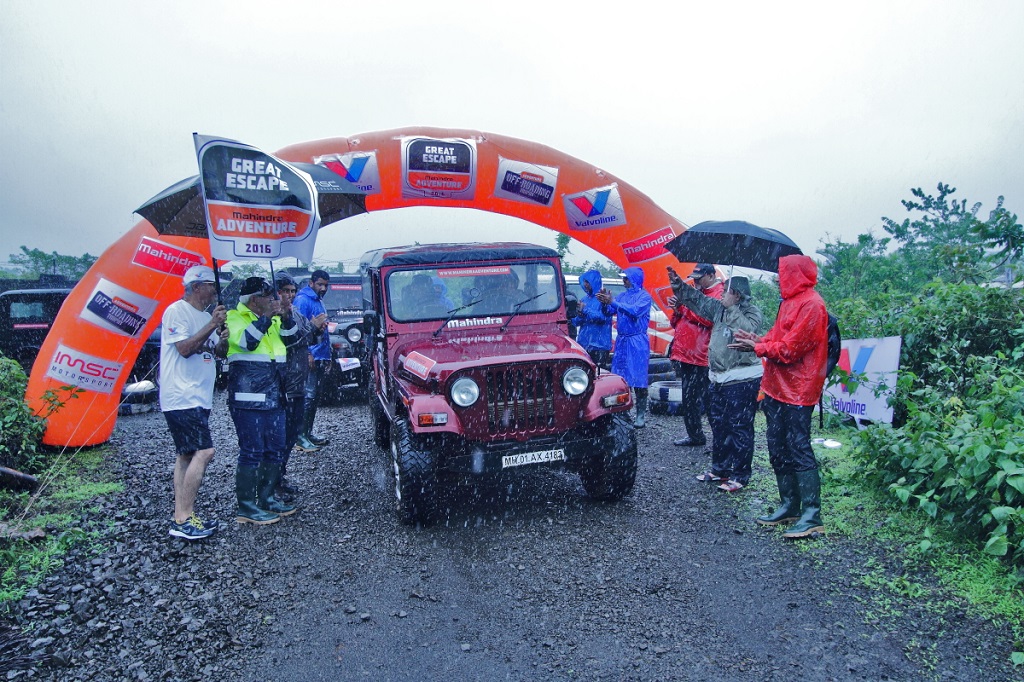 The 132nd edition of the Mahindra Great Escape – one of India’s most popular off-roading adventures, concluded successfully in Lonavala today, with more than 70 4WD vehicles from the Mahindra stable maneuvering the challenging route. This Great Escape saw participation from Mahindra customers from Lonavala, Mumbai, Pune and neighboring areas.

Wrapped in a blanket of green with gurgling streams and rolling hills, Lonavala offered a picturesque setting for a day of fun-filled off-roading. Located close to both Mumbai and Pune, Lonavala gave auto enthusiasts the perfect opportunity to enjoy the monsoon and tackle the challenging route. The rally was flagged off from 19 Degree North at Lonavala and presented an opportunity to explore the area’s scenic terrain. The event saw participation from the entire gamut of Mahindra vehicles including the Bolero, Scorpio, Legend and the extreme off-roader – the Mahindra Thar CRDe 4×4 – each representing the company’s tough and rugged DNA. These iconic Mahindra SUVs negotiated the arduous and slushy terrain of Lonavala and discovered what it’s like to be in the lap of nature. The drive received an overwhelming response from off-roading enthusiasts, leaving everyone asking for more.

This year, the competitors got a chance to demonstrate their off-road driving skills through different stages of obstacles. They had to tackle four obstacles, The Crab, The Quarry, The Hill Climb and Rocky Drop, which included off-roading through the river bed, making trails over rock boulders and maneuvering their way out of slush pits.

These winners from Lonavala Great Escape, will join winners from the other upcoming Great Escapes like Goa, Sakleshpur, Hyderabad, Vagamon, Gurgaon, Jaipur, Chennai, Chandigarh and Shillong to compete against each other for the trophy at the finals.

This edition of the Mahindra Great Escape was conducted in association with Valvoline – – Official Lubricant Partner.

About the Mahindra Adventure Initiative

A unique concept to showcase the tough and rugged DNA of Mahindra vehicles, Mahindra Adventure functions as an umbrella brand with a series of adventure and motor sports events organized under its banner.

3rd Mahindra Great Escape of Season 7, held under Mahindra Adventure umbrella brand Promotes the spirit of off-roading and demonstrates the tough and rugged DNA of Mahindra vehicles Winners of the Off-Roading Trophy will compete […]

Introduces multi day expeditions, Kashmir to Kanyakumari (drive across the length of India) and Authentic Bhutan (an epic drive through the Land of the Thunder Dragon) Continues with popular Great Escapes, multi day Expeditions and […]