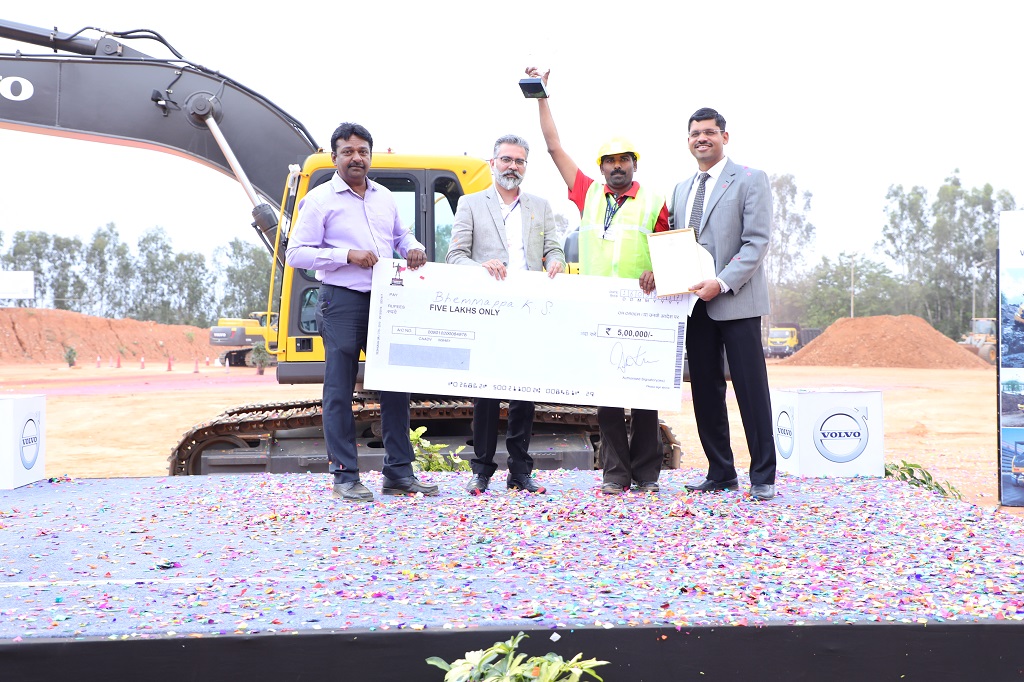 The search for India’s most talented equipment operator has concluded with Bheemappa K.S. from Karnataka taking the title. Volvo CE also used the event to highlight the importance of skills development in the construction industry and the vital role played by equipment operators.

Volvo CE is widely recognized as one of the world’s leading producers of construction equipment, and in particular the manufacturer focuses on equipping its machines with highly ergonomic cabs that feature advanced and intuitive operating technology. This is part of a long-held belief at the company that any machine is only as effective as the person operating it. By extension, the company also believes that by creating the best operating environment and systems, greater machine productivity can be delivered.

As part of its focus on equipment operation, the company runs a hugely popular Operator Champion contest in countries across the globe, and has just wrapped up its inaugural edition of the event in India. The competition in India concluded earlier this month with Bheemappa K.S from Karnataka scooping first prize and Narendra Singh from Rajasthan receiving runners up awards.

After presenting the awards to the champions, Dimitrov Krishnan, Vice President and head of Volvo CE India, said:

“Our Operator Champion program has received excellent response from the Industry. We are celebrating the tremendous value that Equipment Operators bring to the Construction and Mining industry. Their role in nation building is to be celebrated. Through this Operator Champion program, we have connected with so many Operators and their networks around the country. Our aim has been to make each one of them realise the important role they play, improve their competence and confidence. And to the winners, we hope the prize money will change their life to an extent.”

“Our country is facing huge challenges in terms of infrastructure development and it’s essential we continue to focus on skills development to help us meet the ambitious targets we face. The men and women that sit at the controls of our equipment have the power to deliver real change in our built environment and this is something we should be celebrating as a nation.”

The Operator Champion final took place between March 14th  and 16th at the Volvo CE headquarters in Bangalore. The three day event welcomed  each of the winners from the nine regional heats, which were staged over the past 18 months. There were a host of VIPs at the event, including Gaurav Kapoor, head – industry partnership & CSR at SCC Engagements, part of the National Skill Development Corporation. His presence reflected the ongoing focus on skills development within the Government of India.

On the first day of the finals the attendees were recognized for their achievements thus far and also given VIP tours of the Volvo CE facilities in Peenya and Hosakote. On day two, there was a full day of competition with two rounds scheduled at the Hosakote Customer Center. Each finalist competed in a range of challenges – against the clock – to test speed, dexterity, logical thought and more. Operators were challenged on both live equipment and simulators, for both excavator and wheel loader operating systems.

For the final day, the operators took part in a further round of competition before reconvening later that day for the announcement of the winners at the closing gala dinner. Some 100 people attended this celebration, including senior leadership from Volvo, government officials, major construction contractors and representatives from Volvo dealerships. In addition to receiving the Operator Champion trophy, the winner received a cheque for 5 lakh rupees, while the runners up each received 2 lakh rupees.

Volvo CE is launching its newest paver into India, the mid-sized P6820C ABG. The unit offers a winning combination of power, production capacity, and precision for excellent paving quality, with perfectly smooth mats. The new […]