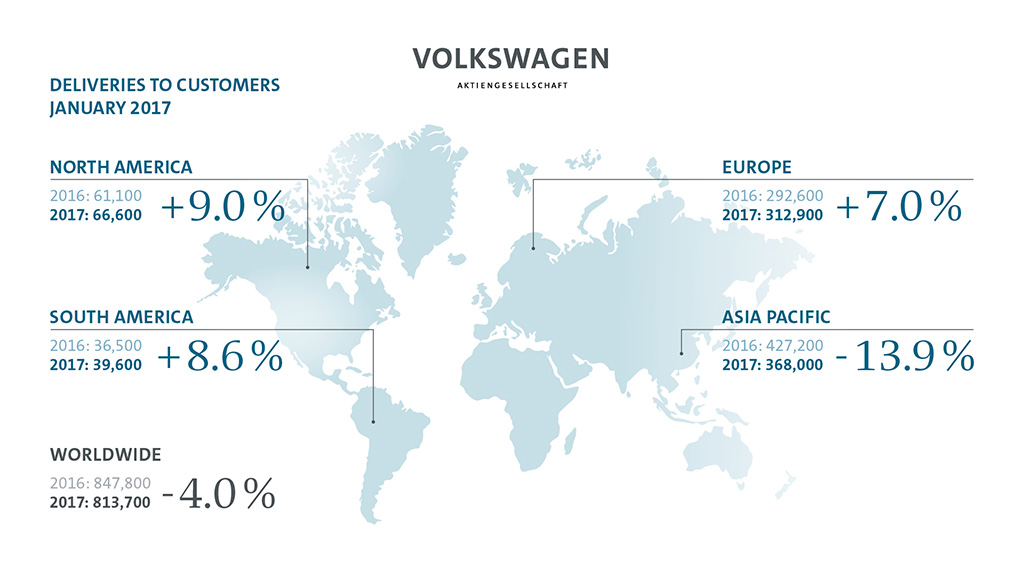 In January, the Volkswagen Group handed over 813,700 vehicles to customers worldwide. “Following strong growth last year, special effects in China affected deliveries at the beginning of the year. Especially the early date of the Chinese New Year, the increase in tax on vehicles with small engines and temporary restraint in planning on the part of Audi dealers had an impact on the sales results for January. However, we expect to continue healthy growth in China this year,” said Fred Kappler, Head of Group Sales of Volkswagen Aktiengesellschaft, commenting on the figures for January. “Outside China, the Group recorded solid growth of 4.9 percent in its worldwide markets,” Kappler added.

Special effects in China had an adverse impact on January deliveries in the Asia-Pacific region. In the first month of the year, 368,000 vehicles were delivered in the region, including 344,000 vehicles handed over to customers in China – a fall of 14.0 percent.

Overview of deliveries by the Volkswagen Group:

883,400 vehicles delivered in month of June – a rise of 5.1 percent Fred Kappler, Head of Group Sales: “Solid growth overall during the first half year is partly attributable to the strong performance in […]

899,400 vehicles handed over to customers in November / +7.9 percent 9.38 million vehicles delivered worldwide from January – November / +3.1 percent Fred Kappler, Head of Group Sales: “We are headed for a good delivery […]