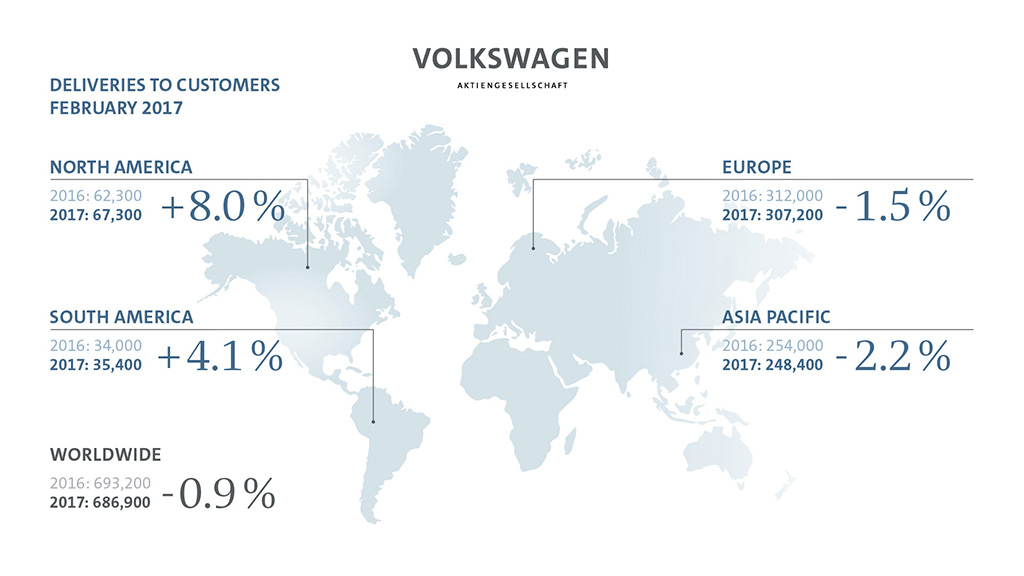 •   1.5 million vehicles handed over in January and February 2017
• Fred Kappler, Head of Group Sales: “Together with our Group brands, we are working on qualitative growth.”

In the first two months of the year, the Volkswagen Group delivered 1.5 million vehicles to its customers throughout the world. In February, the Volkswagen Group handed over 686,900 vehicles to its customers. “February shows the different development of markets in the various regions. We are experiencing a tailwind in Central and Eastern Europe as well as North America and were able to increase deliveries by the Group, in some cases significantly, in these regions. On the other hand, deliveries in Germany and the Asia-Pacific region remained below the previous year’s level,” said Fred Kappler, Head of Group Sales of Volkswagen Aktiengesellschaft, summarizing the figures for February. “However, we expect that we can once again look forward to healthy growth in China this year. Together with our Group brands, we are working on qualitative growth,” Kappler added.

Deliveries in the Asia-Pacific region in February reached 248,400 vehicles. In total, 616,500 new vehicles were handed over to customers in the region in the first two months of the year. This figure included 223,000 new vehicles delivered to customers in China in February, corresponding to a slight fall of 1.9 percent.
Overview of deliveries by the Volkswagen Group:

Fred Kappler, Head of Group Sales: “Outside China, the Group recorded solid growth of 4.9 percent in its worldwide markets.” In January, the Volkswagen Group handed over 813,700 vehicles to customers worldwide. “Following strong growth […]

0.8 percent increase in the first three months 967,100 vehicles delivered in March Fred Kappler, Head of Group Sales: “The Group recorded its best start to the year in China since entering the market there.” […]