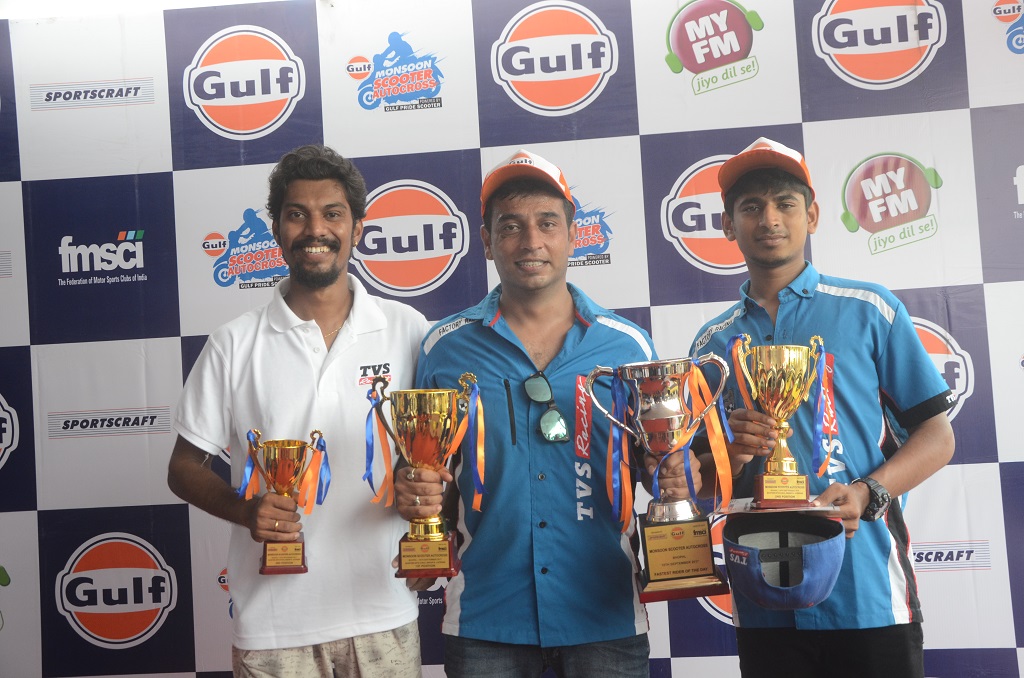 Bhopal, September 10, 2017: It was a happy Sunday for TVS Racing in Bhopal as they successfully won all three positions in Group B category at Gulf Monsoon Bhopal Autocross event. TVS Racing team was represented by four participants in the Group B category namely, Syed Asif Ali, Imran Pasha, Akash Satpute and Shamim Khan at India’s first ever monsoon Scooter Autocross event. Three racers from the team secured podium positions. Syed Asif Ali won the first position in Group B category, Imran Pasha stood 2nd in the same category followed by Akash Satpute in the 3rd position.

The team performed consistently with changing weather conditions on the track. The event was marked by slight rains an evening before setting the stage for a monsoon Autocross event the next morning. Determined racers from TVS Racing had a good start and recorded better timing over their competitors right from the start point. Aggression and commitment to the team was evident with their focussed performance on the track. The intensity of their performance went up with the cheering of the crowd.

Commenting on the victory, Asif said, “I am very happy to contribute to the success of the team at this event and thank the complete team, my fellow riders, technicians, mechanics and other officials from the racing team for contributing to the success. I look forward to newer challenges ahead.”

Scooter Racing by TVS Motor Company: TVS Racing is the first factory racing team in India with a legacy of over 35 years. TVS Racing has supported over 100 riders since 1983 and the team has been actively participating in on and off- road racing events such as road racing, Super-cross and Motocross, Dirt Tracks, Rally etc. TVS Racing has been participating in Scooter Rally events for the past 4 years. The team has won Indian National Rally Championship in 2015 and 2016 in scooter category. Our team has maintained more than 90% success rate in scooter events and has won 13 events out of the total 14 events organized in the year 2015 and 2016. Our scooter racing team won Dakshin Dare rally 3 years in a row from 2014 to 2016. We are also the winners of Gulf Monsoon Scooter Rally in 2014 and 2016. Syed Asif Ali is our ace rider for scooter racing. Asif is a 36-year-old racer and has been associated with TVS Racing for four years now. He won the FMSCI Indian National Rally Championship 2W consecutively for two years in 2015 and 2016.Our scooter racing team uses a race spec TVS Racing scooter for the rallies. For Bhopal Autocross they used a 4 stroke, air-cooled, single cylinder 160cc scooter. This race scooter uses disc brakes in both the front and rear wheels and weighs about 90kgs. It uses tuned Continuously Variable Transmission system to meet the higher speed and acceleration requirement. Center of gravity of the scooter is kept low for better maneuvering.

The final 15 women racers selected for the TVS Racing – Training Academy for Women in association with the Rajini Academy of Competitive Racing. 30 women riders attended the day long briefing and training session […]