In 2018, TVS NTORQ 125 was launched as India’s first Bluetooth connected scooter and has since secured its place like no other, by offering unparalleled style, superior racing-inspired performance, and first-of-its-kind technology. The brand has become synonymous with innovation. In the past year, TVS NTORQ 125 has also introduced Race Tuned Fuel Injection across its portfolio. It continues to evolve and seeks to delight its new-generation customers – Gen Z. For the Gen Z, the Marvel Universe is a strong affinity area. TVS NTORQ 125 breaks new ground with the launch of the SuperSquad Edition inspired by Marvel’s Avengers.

Speaking on the occasion, Mr. Aniruddha Haldar, Vice President (Marketing) – Commuter Motorcycles, Scooters & Corporate Brand, TVS Motor Company, said, “We are excited to launch the TVS NTORQ 125 SuperSquad Edition inspired by Marvel’s Avengers. With this association, our common Gen Z consumers can ‘Play Smart. Play Epic’. We have all had our favourite Super Hero, with whom we relate. We find ways to celebrate this relationship. The TVS NTORQ 125 SuperSquad Edition, gives new expression to this ageless fascination. The initial feedback has been nothing short of EPIC. We are sure that this too will be a blockbuster!”

The SuperSquad logo and the iconic Avenger’s ‘A’ are prominently placed on the front panel, leg shield, and below the speedometer.

Inspired by Black Panther, this edition packs in the jet-black colour along with hues of purple. The scooter sports elements from the Black Panther suit as a large part of the decals. For enthusiasts, it packs more surprises with the signature salute Wakanda Forever and the inclusion of the number 66 (1966), denoting the year when the character was introduced in the Marvel Universe. 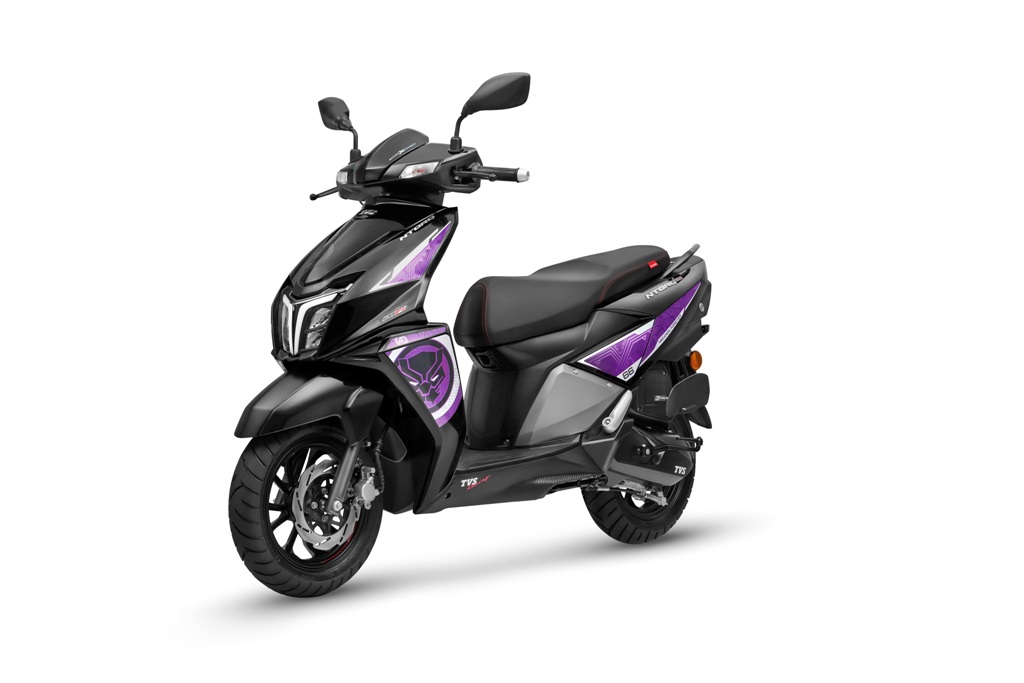 Inspired by Iron Man, the decals replicate his Red and Gold suit giving it a stellar look. The Iron Man helmet is embossed on the leg shield, while the arc reactor finds its way to both panels.  Enthusiasts will be delighted with the Mark XXIX encryption on both panels which signifies Fiddler, Iron Man’s 29th suit, along with the number 63 (1963) indicating the year when the character was introduced in the Marvel Universe. 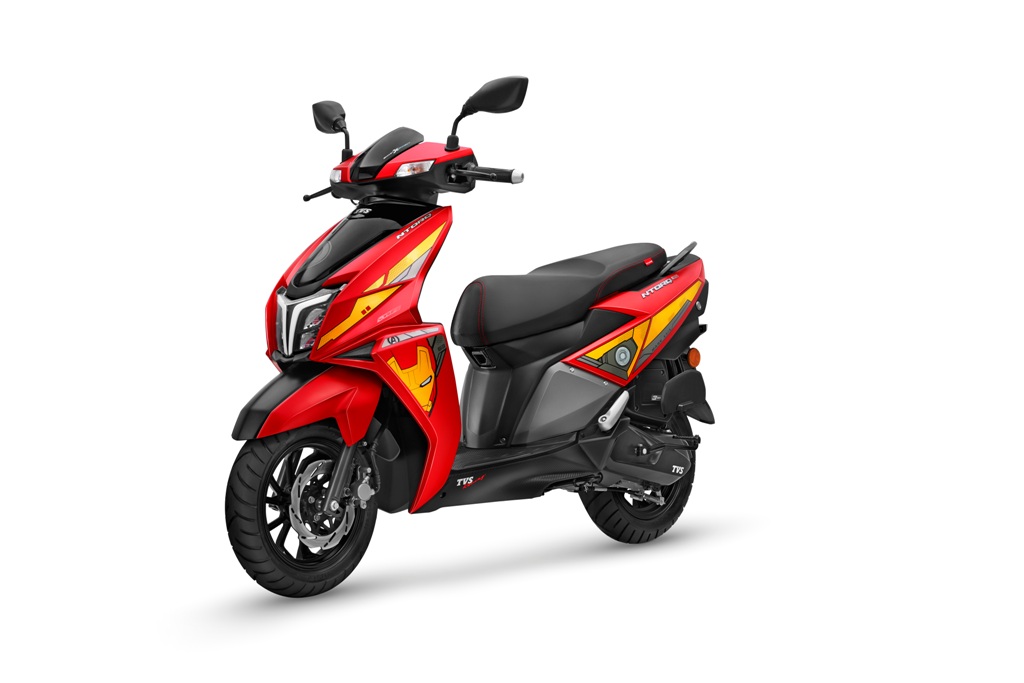 Inspired by Captain America, the scooter gets the blue, white, red colour tone associated with the First Avenger. True to the character, it sports the number 41 (1941), the year when Captain America was introduced in the Marvel Universe.  The shield is at the front of the scooter and the edition flaunts Super Soldier on both panels with pride. 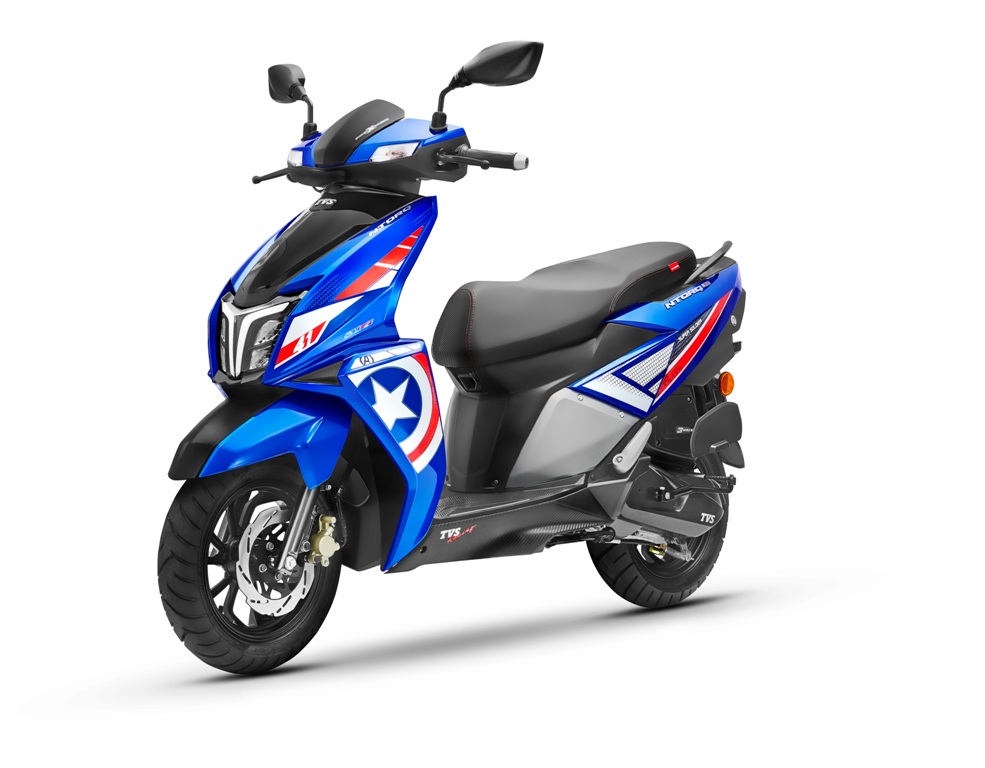 The TVS Connect App of the SuperSquad Edition is powered by SmartXonnect* and will come with customised UI, inspired by the characters. The app opens with the silhouette of the respective characters and then important elements such as Captain America’s shield, Iron Man’s suit and Black Panther’s eyes along with the character crest are consistent across the app interface. Each app screen is crafted with a unique character trait of the selected Super Hero, making it a complete Marvel experience.

TVS Motor Company is a reputed two and three-wheeler manufacturer and is the flagship company of the USD 8.5 billion TVS Group. We believe in Championing Progress through Mobility. Rooted in our 100-year legacy of Trust, Value, and Passion for Customers and Exactness, we take pride in making internationally aspirational products of the highest quality through innovative and sustainable processes. We endeavour to deliver the most superior customer experience at all our touch points across 60 countries.  We are the only two-wheeler company to have received the prestigious Deming Prize. Our products lead in their respective categories in the J.D. Power IQS and APEAL surveys for five years.  We have been ranked No. 1 Company in the J.D. Power Customer Service Satisfaction Survey for consecutive four years. For more information, please visit www.tvsmotor.com.