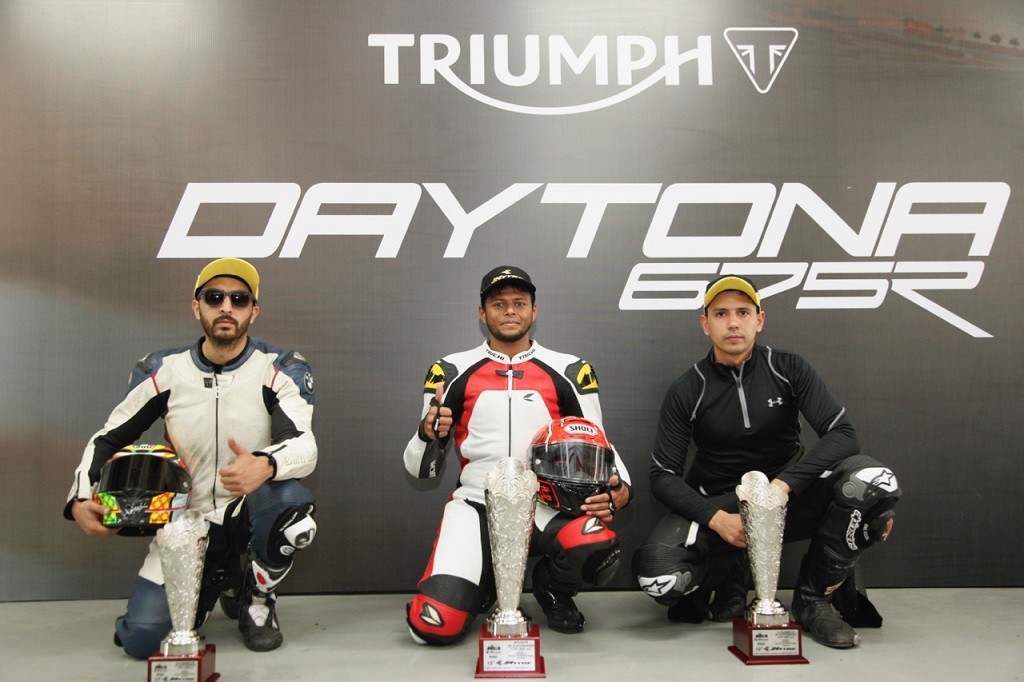 Triumph Motorcycles’ Daytona 675 and Daytona 675R SuperSports Motorcycles were seen in the 600+ category race for two wheelers at the JK Tyre Racing Championship 2016 that took place at the Buddh International Circuit in Greater Noida between 18th to 20th November 2016. This is the second time that Triumph Motorcycles has participated in the championship in the two-wheeler segment and all the participants sported their action packed Daytonas. The top 3 winners of the fast paced, exciting second race race emerged as Mr Deepak Ravi Kumar, Mr. Vijay Singh as runner up and Mr. Kulwant Singh as the second runner up. The overall 600cc championship went to Mr. Deepak Ravi Kumar. 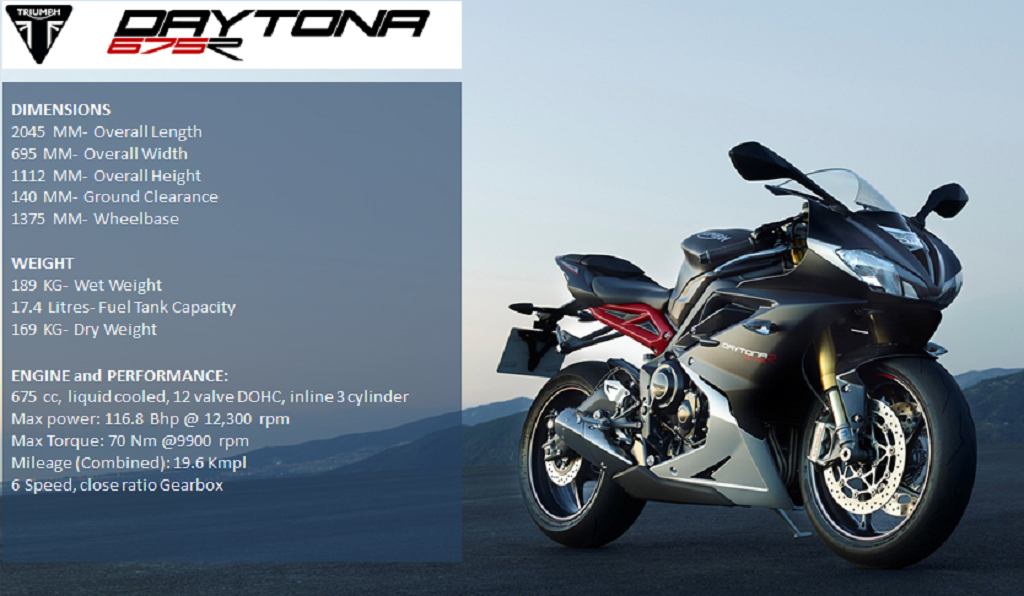 Faster, better handling, easier to ride and with an even angrier engine note, the Daytona 675R takes Triumph’s super sport weapon to another level. Launched alongside the standard Daytona 675, it was the first major update since the 675’s release in 2006. Every inch of the machine is different. A new short-stroke engine revs harder and moving the exhaust can from under the seat has improved agility and handling. It’s an epic machine. More power, lighter weight, and easier to ride, our engineer’s ambition was simple: to create the most perfectly balanced motorcycle.  An equal blend of torque, responsiveness, agility, poise and purpose.The result is a bike with class-defining power, performance and handling.

The Triumph Daytona 675’s inline triple is tuned for race –winning peak power and torque of 118.5 PS at 12,305 rpm and 70.2 Nm at 9,900 rpm. Repeatedly tested and developed, the Daytona 675s suspension, frame, geometry, weight balance, braking power and steering response are honed to a finely- tuned point of perfection, working in total harmony with the engine to give complete control and confidence under all riding conditions.  Add Brembo brakes, a quickshifter, carbon trim and some subtle styling details and you know you’re riding a true thoroughbred motorcycle.

Triumph Daytona was one of the most awarded motorcycles in the super sports segment here in India. The Daytona 675R has been the Bike of choice for the Import Bike of the Year 2015 award at the Bloomberg TV Autocar India Awards; Zee TV Car & Bike India Award in the Reader’s choice category and a twin win at the Top Gear Award 2015  – ‘Bike of the year’ and ‘Sports Bike of the Year.’

Speaking on the occasion, Vimal Sumbly, MD, Triumph Motorcycles India, said, ‘It is a thrill to see our enthusiastic customers take part in this championship with such overwhelming passion for their motorcycles. Our Supersports Daytonas have been making waves with its outstanding features and riding experience setting exceptional standards in the segment. This is a moment of great value and prestige for Triumph Motorcycles in India and we stand here in full support of the racers.’

The JK Tyre Racing Championship (JKTRC) is one of India’s premier racing championship for the drivers aiming at Formula Car Racing. The Championship which was launched in 1997 by JK Tyre & Industries has now become the revered launch pad for the budding motorsport talents in the country.

Riding high on its stupendous success in India, Triumph Motorcycles, the iconic British Motorcycle Manufacturer, has now taken the adventure motorcycling in the country to the next level. Truly pioneering the segment the market leader […]