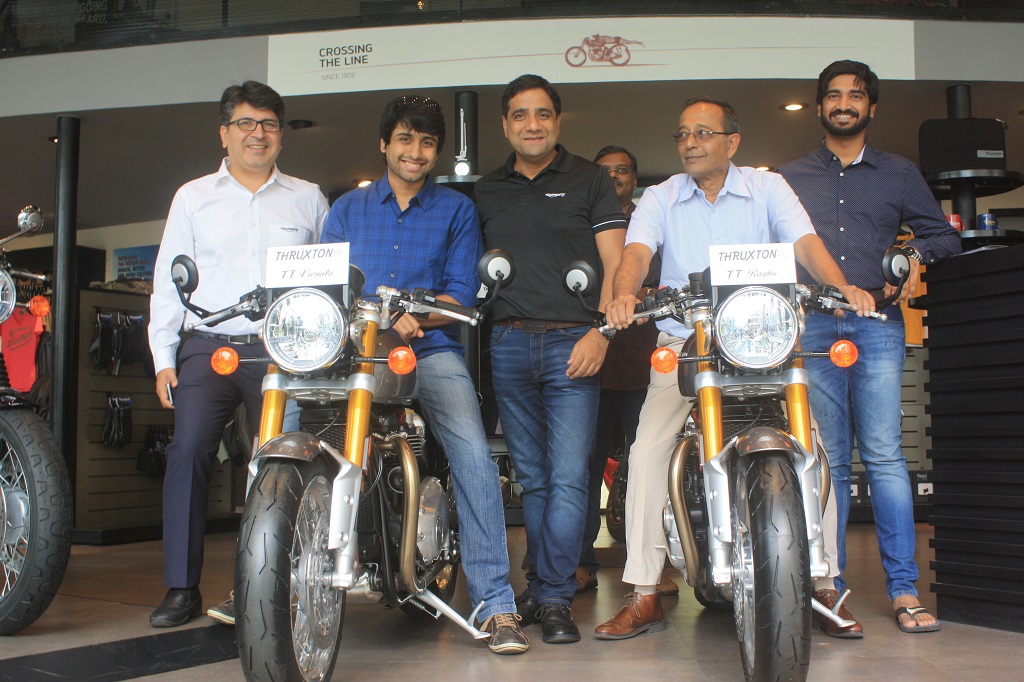 On this occasion, Mr. Vimal Sumbly, Managing Director, Triumph Motorcycles India, said, “We recognise Mr. T. T. Raghunathan and Mr. T. T. Varadarajan’s love and passion for Triumph Motorcycles, which brought me to personally meet them. I am delighted to have them part of our café racer culture here in India. The new Thruxton R’s design, detailing, power and performance have been incorporated into contemporary café racer technology. A ride that will match the aspirations of a seasoned biker, our esteemed Thruxton R owners will have a great time riding a truly timeless icon.”

Mr. T. T. Raghunathan Executive Vice Chairman TTK Group is an automobile enthusiast who has made a lifestyle statement around his lounge-garage, which has a constellation of spectacular vehicles – modern classic and vintage. Fondly known as the Bonneville man owing to his love for the motorcycle and being one of the first to own it back in the day on receiving the first Thruxton R, said, “The first sight of the Thruxton R at this year’s Auto Expo made me want this exciting café racer and be part of the café racing culture once again.I am happy that Triumph Motorcycles made me the first Thruxton R customer.The rich heritage of motorcycling, which Triumph brings,captures the true spirit of motorcycling.

Mr. T.T. Varadarajan is a man known for his tenacity, business acumen and his passion for bikes the latter being a passion that he shares with his son Siddharth. Both father and son are bikers to the core, T.T. Varadarajan used to rally bikes in his younger days and Siddharth did a fair bit of racing during his college days. Today, their garage includes a collection of around 10 motorcycles, which include a Triumph Daytona 675 R, a 2014 Triumph Thruxton and now a brand new 2016 Triumph Thruxton R. According to them, “Triumph with its rich history & heritage in racing and riding captures the true spirit of motorcycling through its models such as the Thruxton and Daytona. The amazing thing about the 2016 Thruxton is the nostalgia of a true café racer while still having all the bells and whistles of a modern motorcycle”.

The father son duos are also responsible for bringing the California Superbike School (CSS) to India. CSS is the world’s foremost superbike riding/racing school. CSS India run by them is supported by Triumph and has trained over 600 students in the last 6 years of operation

The breath-taking new ThruxtonR takes the café racer to its heritage performance roots. Immense power, delivered by its 1200cc ‘Thruxton spec’ engine, and the handling, agility and capability to match its beautifully imposing and authentic styling.Out of all the members of the new Bonneville family, the new Triumph Thruxton R has the most to live up to. Its name is as legendary as it gets, even for an icon like the Bonneville.

The Triumph Motorcycles had launched the Thruxton R in India earlier this month. The Thruxton R had its global premier in London last year along with the other members of the new generation of Bonneville family and was first showcased in India at the Auto Expo 2016.The Thruxton R is priced at Rs. 10.70 Lakhs ex showroom Delhi.

“Budget 2016 has generated positive sentiment among the masses of India. We have seen significant changes in the personal finance structure, a more robust medical program, greater thrust on agriculture and rural development, public investment […]

New Delhi, 21st April, 2017: Magnus Petersson calls himself an occasional adventurer. That’s hardly his story given that this 30-year old will have seen 20 countries and travelled 24,000km in just 5 months.  Magnus’s travel […]