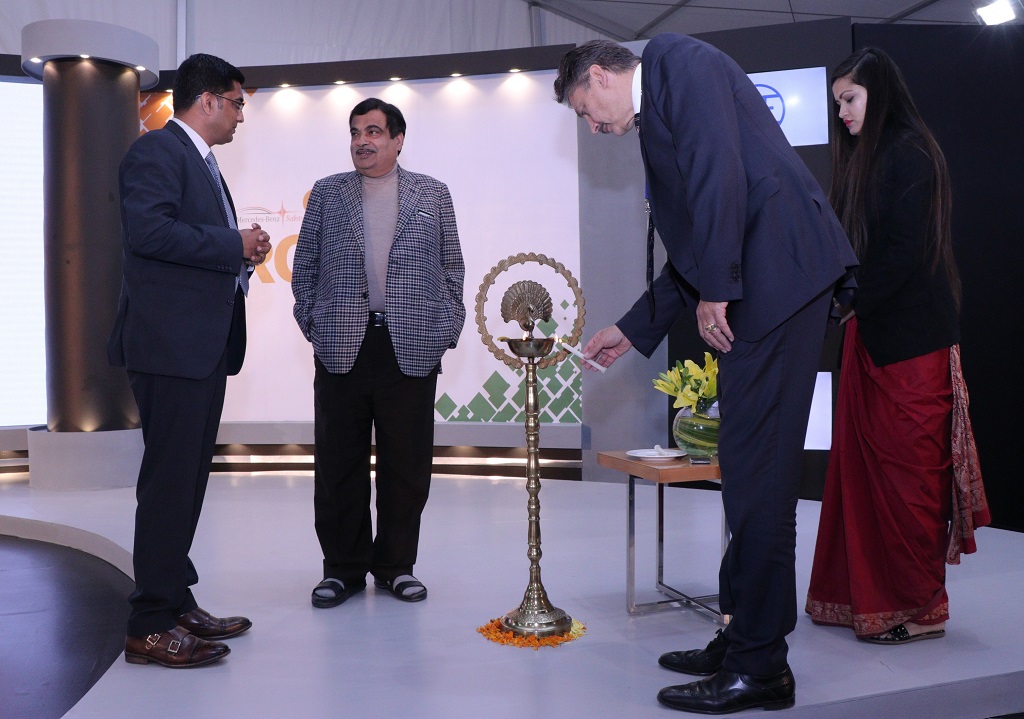 Government of India aims at 50 percent reduction of road accident fatality by the year 2020
• Mercedes-Benz and its group of companies continues to promote awareness on road safety by sponsoring Safe Roads India Summit 2017 in New Delhi
• ‘Safe Roads,’ a unique initiative educates traffic safety through physical demonstrations, visual aids and research reports
• Safety experts from the automobile industry and NGOs discuss on measures to improve road safety for children
• ‘Safe Roads’ is a collaborative initiative of Mercedes-Benz group companies along with Autliv, Bosch, britax Romer and ZF.

Speaking on the occasion Shri Nitin Gadkari, Minister of Road Transport & Highways, Shipping, Water Resources, River Development and Ganga Rejuvenation said that the Government of India is committed to reducing road accident fatality by 50 percent by the year 2020. He further added that, road accidents are caused by both by both human error and infrastructural factors like defective road design, inadequate signages, lack of underpasses etc. The Road Transport Ministry has therefore employed a multi pronged approach to tackle this problem by addressing engineering and design issues, driver training and mass awareness.

In order to reduce human error Shri Gadkari stressed upon the need for scientific training of drivers. He said India has a shortage of 22 lakh drivers. The Government has decided to set up 2000 Driver Training Centers to fill this gap, 100 have already been set up. Most of these driver training centres will be set up in rural and tribal areas where they will also create employment opportunities for the local youth.

In addition to improving highways the Government is also focussing on generating road safety awareness among people through campaigns like SAFE ROADS. The Minister commended Mercedes-Benz for taking up the SAFE ROADS campaign as their CSR initiative. He said that in order to achieve the target of 50% fatality reduction by 2020 the Government needs the support of programs like Mercedes-Benz SAFE ROADS.

Since last two years, Mercedes-Benz and its entities organized multiple impactful and successful road safety awareness road-shows in most major cities like Delhi, Ahmedabad, Mumbai, Pune, Bangalore, Kochi, Hyderabad and Kolkata that touched more than 50,000 lives through physical demonstrations, visual aids and research reports.
The Safe Roads Summit is conceptualized to take the road safety awareness to another level. The first Safe Roads Summit this year focuses on safety of children as they are the most vulnerable on the streets.

Safety is a core competency and a core value for Mercedes-Benz and its automotive brands. Mercedes-Benz, in particular, is renowned worldwide for developing highly sophisticated safety systems. However, implementation of effective safety systems remains a challenge, as the road users often do not comply with traffic rules or do not use the safety systems onboard their vehicles. On Indian roads, approximately 150,000 people die every year of road accidents, largely caused due to ignorance of safety norms and rules. That’s an equivalent of 17 people per hour. ‘Safe Roads’ was hence conceptualized by Mercedes-Benz, in an effort to reduce this startling fatality rate on Indian roads, by creating more awareness on road safety. Mercedes-Benz is convinced that such initiatives can begin an era of road safety awareness that supports a new culture of road safety for Indians. Over 70 per cent of the fatalities can be reduced by 2025 through education and enforcement of safety rules and by creating awareness.

Every year, thousands of young children are killed or seriously injured in accidents in India. According to Ministry of Road Transport and Highway reports, around 27 children die on Indian roads every day.

At the Summit, 300 school children and 200 college students from New Delhi attended the event. The college students were given a ‘First Responder Training’ by NGO partner Indian Head Injury Foundation.

Prof. Dr.-Ing. Rodolfo Schöneburg, Mercedes-Benz Cars Development Director, Safety/Durability/Corrosion Protection – Daimler AG mentions, “For Daimler, safety is a priority and core value. We constantly work and develop concepts to make our vehicles safer – not only for the drivers and their passengers, but also for vulnerable road users. We completed two impactful editions of ‘Safe Roads’ that touched thousands of lives in India. This year, we shifted our focus on child safety and vulnerable roads users in India. Children are our future and they deserve our full attention. With the initiative, we hope that parents understand how important it is to protect their children inside and outside of cars. We hope that SAFE ROADS will continue to bring a massive and drastic change on road safety awareness and support a new culture of road safety among the people in India.”

Manu Saale, MD & CEO, MBRDI states, “With already a sustainable platform laid, the Safe Roads initiative is beginning to transform the outlook of road safety awareness keeping the Indian roads scenario. Children are the future, train them on road safety measures and it makes a great impact on their lives. Keeping the future in mind, these key measures complemented with the state-of-the-art safety technologies would be play a vital role in reducing causalities.”

Roland Folger, Managing Director and CEO, Mercedes-Benz India adds, “The ‘Safe Roads’ initiative that was flagged off two years ago has been phenomenal. We are proud of this nationwide initiative and especially in the market we are making business. Considering the rate of accidents on Indian roads has been alarming and undoubtedly it becomes our moral responsibility being both – as a premium automobile manufacturer and corporate citizen to do our bit to reduce this. There will never be a compromise on safety as Mercedes- Benz marque firmly believes in the principle of safety first.”
About Safe Roads:

‘Safe Roads’ is a road show that spreads the message of road safety through physical demonstration, visual aids and research reports. The physical demonstration will be undertaken with the use of exhibits that have been imported from Germany providing a real life experience of safety measures that can potentially save lives during road accidents:
Belt-Slide:

The exhibit enables people to experience the impact of seat belts in a simulated crash environment at low speed. The aim is to increase the percentage of seat belts usage for front row passengers including driver.

Child Safety Seat:
It is one of the most important purchases you’ll make for your child when you buy a car. A child safety seat is designed specifically to protect children from injury or death during collisions. We’ll show you how to correctly install child seats into your car and how to safely restrain the kids inside their seats.
• All children aged 12 and under should ride properly buckled in the back seat
• Airbags can kill young children riding in the front seat
• Never place a rear-facing car seat in the front seat or in front of an airbag
• Appropriate child seats should be used based on child’s size and weight

Safety Demo Vehicle (new E-Class):
An absolute highlight is the new Mercedes-Benz E Class vehicle. The E Class showcases a glimpse of future of safety. The E Class illustrates trailblazing innovations in the field of safety like PRE-SAFE®,

Alcohol goggles:
Alcohol changes your perception. These special goggles provide a unique experience. They simulate the common ‘walk-the-line’ activity which causes loss of balance and delayed reaction times. Visitors will feel their susceptibility to impairments and realize the potential severe consequences due to alcohol consumption.
‘Safe Roads’ is a collaborative initiative of Mercedes-Benz group companies along with Autliv, Bosch, britax Romer and ZF. The partner organizations have supported the initiative with in-depth research information and data on the existing scenario of road safety in India. These research reports also provide indicators of how the scenario can be improved through education and enforcement of traffic rules.

According to the World Health Organization (WHO) estimation, India is ranked second in the world when it comes to the highest number of road traffic fatalities in 2015, and this made up about 11%of global road traffic fatalities. There has been some good work undertaken by the National Road Safety Council (NRSC) and WHO’s Decade of Action for Road Safety 2011-2020, where a declining road traffic fatality trend was observed in India for the first time, since 2012. However, road traffic injuries remain a concern as about half a million are reported each year.

According to a sample study, in 50% of the accidents, there were no accident avoidance manoeuvres from the drivers. Only in 30% of the accidents, drivers performed a brake or swerve manoeuvre or a combination of both. Also, the percentage use of seat belts by car drivers and front passengers is low (about 16%). There is a need to show case and make road users understand the impact; a typical seat belt will have in a crash scenario.

The production facility now carries an investment of INR 1000+ crores and has the largest installed production capacity for any luxury carmaker in India. Mercedes-Benz India also has the largest network spread amongst any luxury carmaker, with presence in 42 Indian cities through 87 outlets. Through the exclusive AMG Performance Centers located in 7 cities including Delhi, Mumbai, Hyderabad, Bangalore, Kochi, Chennai and Pune; the AMG performance sub-brand of Mercedes-Benz also boasts of a strong retail network presence in the country.

Mercedes-Benz India’s flagship programme, ‘My Mercedes, My Service’ launched in 2016, aims to completely redefine the after-sales experience by digitalizing service process and create unparalleled benchmark in the luxury car service domain. The launch of ‘Mercedes-Benz Approved Tyres’ in February 2017, and the ‘Approve Advanced Programme’ in May 2017, is also integral to the ‘My Mercedes, My Service’ campaign. ‘My Mercedes, My Service’ aims at enhancing the customer’s vehicle ownership experience manifold, making after-sales experience as the new differentiator in the luxury car segment. With the use of big data and in-depth knowledge of the driving pattern of Indian customers, Mercedes-Benz has been able to drive successfully, low cost of ownership for its customers.
Mercedes-Benz India product portfolio comprises the locally produced Mercedes Maybach S 500, S-Class, E-Class, C-Class, CLA luxury sedans and the GLA, GLE and the GLS luxury SUVs.

The long wheel base new E-Class is Made in India, for India, the first new generation car to be locally produced since market launch. India is the first country to get an RHD version of the LWB E-Class in the world.

Mercedes-Benz India registered the sales of 11,869 units in the January–September 2017 period. In 2017, ‘One Team, One Goal’ will be Mercedes-Benz’s philosophy, towards achieving best customer experience. The company will have fascinating product introductions, innovative luxury retail experience, value driven finance programmes and innovative after-sales service experiences. With ‘One Team, One Goal’ philosophy, Mercedes-Benz India will continue the ‘winning’ momentum it has created for itself in the diverse Indian market.

Camp to be held across all authorised workshops pan-India, from July 21 to August 31, 2017 Pune: Monsoons have arrived in the country, a season that is much awaited by many, a time when a drive with family and […]