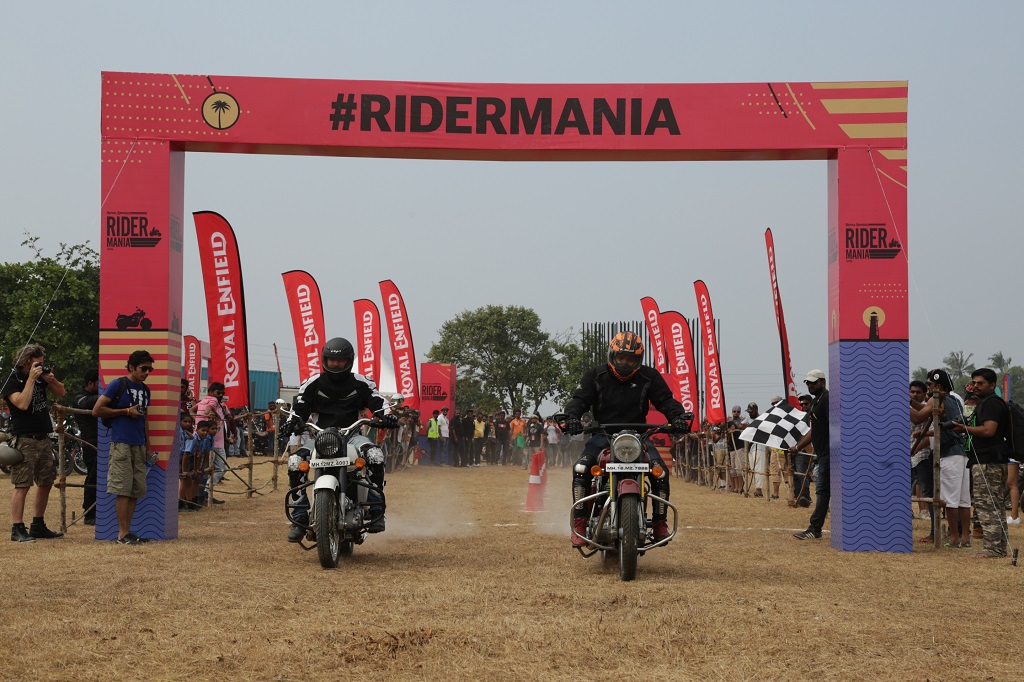 Rider Mania, the biggest gathering of Royal Enfield riders concluded on Sunday, 20th November, 2016 with the largest turnout ever since the inception of the festival. Organized at Vagator in Goa, the three-day motorcycling extravaganza hosted thousands of motorcycling enthusiast from India and from several continents across the globe.

Mr. Rudratej Singh, President, Royal Enfield said, “We are seeing more Royal Enfield riders coming into Goa to celebrate Rider Mania which has become one of the most definitive festivals that celebrates motorcycling, anywhere in the world. It is an extremely desirable challenge we face every year and we can happily say that like every year, Rider Mania 2016 has again had more number of participants than its previous editions making Rider Mania 2016 more inclusive and interactive. It is camaraderie and the passion for motorcycling that makes our customers our real brand managers and it is our privilege to interact and share experiences with them. I would like to invite more customers from India and abroad to come to Rider Mania 2017, next year, that will be held from 17 – 19 November at Vagator, Goa”

Rider Mania 2016 saw record participation, not just in numbers but also attendees from diverse backgrounds. Riders, old and new, rode from as far as Delhi, Guwahati, Gwalior, Ahmedabad, Jaipur and even Bhubaneswar for the annual get-together relishing every moment leading up to Rider Mania.

The festival saw passionate motorcyclists participate in fun and competitive events. The most sought after event at Rider Mania – the Dirt Track Race saw participants turning up in their special race-tuned motorcycles to slug it out on a dusty, uneven race track. For the first time, a special Himalayan category was introduced. Sanjay Kumar won the first ever Himalayan men’s expert category dirt track race and Salman Khan was the winner of Mens Himalayan novice category. In the Mens 500cc category, Omkar Budhale won in the Experts and Suhail Ahmed in the 500cc Novice category. In the Womens 350cc category, Rinku Tahare took the top spot. Suhail Ahmed won the ultimate ‘Race of Champions’. Attendees of the 2016 edition of Rider Mania also witnessed the debut of Riding school STRE (or She Travels on a Royal Enfield), a program where women learn to ride a motorcycles. The custom bike display is one of the biggest attractions at Rider Mania. This year, Rider Mania had some of the most prominent names in the Indian custom building industry. From experienced names like Old Delhi motorcycles to the new talents like Young Kid Customs showcased their best designs exclusively made for Rider Mania 2016. Bull City Customs, Buraq Motorcycles, XLNC Customs, In line3 Customs, Wheel Vedas Customs and Bulleteer Customs were the highlights this year.

The Long Distance Riders Forum hosted prominent riders from around the world like Kedarnath GM, author of ‘Dream to ride around the world, Srinivas Chamarthy and Vishvesh Mehta. The forum is an opportunity for new riders to get inspired to explore and not get intimidated by their fears.

Retro Bike of The Year – Interceptor 650

Monthly Update – January 2017 Sales performance Royal Enfield kickstarts 2017 with a strong performance and posted sales of 59,676 motorcycles in combined domestic wholesale and exports in January 2017, recording a growth of 34% […]