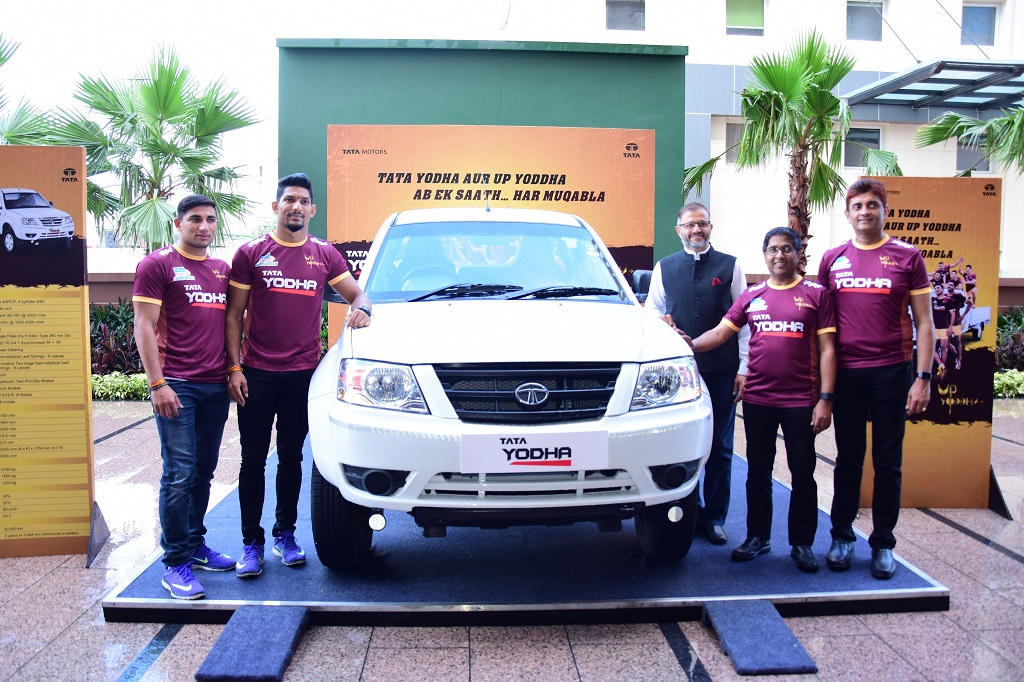 Lucknow, 25 July 2017: Tata Motors today announced the association of its dynamic new Pick-up, Tata Yodha with one of the latest franchise in the upcoming Vivo Pro Kabaddi League (PKL) 2017, the Uttar Pradesh (UP) Yoddha. The PKL Season 5 will start on an exciting note with the new team of UP Yoddha, who are all set to take the season by storm. Tata Yodha is the official sponsor for the team. Hon’ble Minister, Sports & Youth Welfare Department, Uttar Pradesh, Shri. Chetan Chauhan unveiled the official team jersey, today, in the presence of the UP Yoddha squad and the Tata Motors’ senior management.

The franchise, owned by GMR Group, squad underwent fitness and conditioning camps at D.P.S Aligarh. The centre, owned by the franchise partner Pavna Group, provided excellent facilities for both training and lodging with a full-fledged sports hostel. The camps were commanded by head coach Uday and assistant coach Arjun Singh. One of the key focus areas of the GMR Group over the years has been to harness local talent in any sport that they are part of. With a number of local kabaddi tournaments in the region, it is expected to help UP Yoddha net some exciting new talents in the long-term.

Speaking on the occasion, Col Vinod Bisht, Head Yoddha, UP Yoddha said, “It has been a really enjoyable experience building up towards what will be the inaugural season for us. The training camps have really helped foster strong team spirit in the squad. We could not have asked for a better build-up than what we have had. The UP Yoddha squad already has a number of stars who have set the stage on fire in the Vivo PKL. With exciting new talents also likely to be added to the squad in the years to come, the future looks bright for the franchise. We have been really fortunate to have a strong partner like Tata Yodha with us. Together I hope we can scale new heights in spreading the message of the sport throughout the state of UP.” 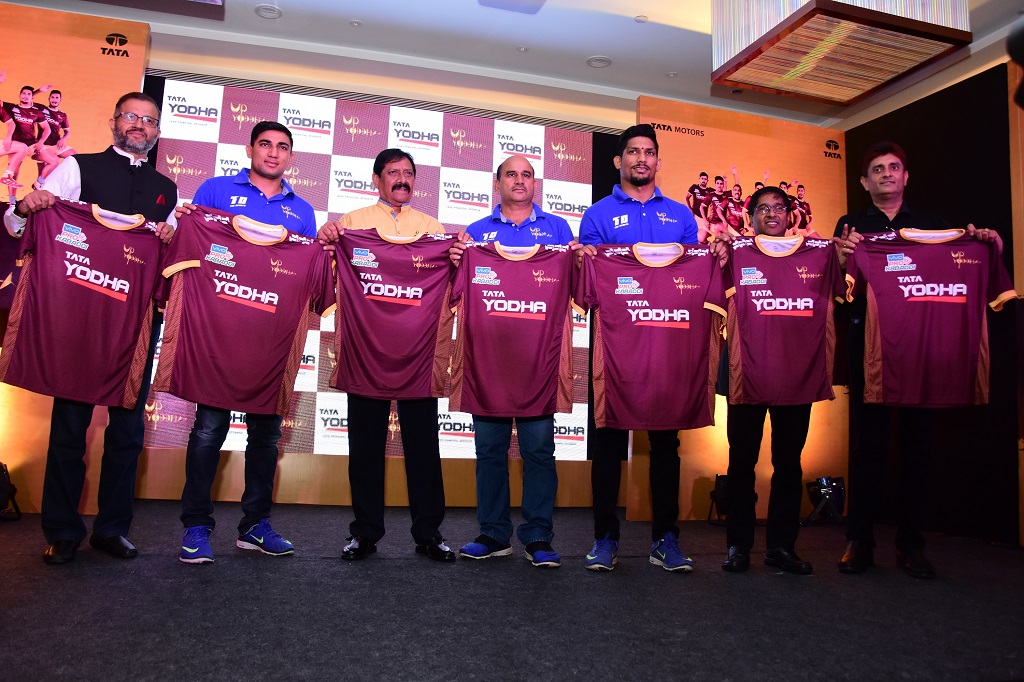 The Tata Yodha like the UP Yoddha is one of the recent additions to the Pickup segment in the commercial vehicle market and offers customers with a great combination of superior performance, highest earning potential and lowest total cost of ownership. Tata Motors’ association with team U.P. Yoddha reiterates the values Tata Yodha shares, with the sport as well as with the team. And when two brands that share similar values come together, it is sure to be a winning combination! Driven by a team of professionals and strategic thinkers, Tata Motors, as a market leader and a champion brand, places great emphasis on all these attributes too.

Commenting on the announcement, R T Wasan, Head – Sales & Marketing – Commercial Vehicles, Tata Motors said, “As a pioneer in the Indian automotive industry, at Tata Motors we are constantly innovating and introducing class leading solutions, across segments and one of our newest being the dynamic Tata Yodha range. We are seeing excellent traction for the Yodha in the market as our pickup sales have grown by 60% in the first three months of this year and we are confident of continuing to gain market share in this segment. Kabaddi as a sport resonates with the strength and endurance similar to the attributes of Tata Yodha pickup and our association with the UP Yoddha team is the perfect fit, since both relate to dynamism, being reliable, robust, and rugged with the potential, zeal and passion to overcome all obstacles and succeed at the highest level. We are truly delighted to partner with U.P. Yoddha and wish the team the very best for the fifth edition of Vivo Pro-Kabaddi League.”

The Vivo Pro Kabaddi League 2017 begins on July 28, 2017. The UP Yoddha have prepared rigorously for the upcoming season in the best possible way. They will play their first match on August 1, 2017 against Telugu Titans in Hyderabad. In all the 12 franchises from 11 states, UP Yoddha will be playing more than 130 matches over 13 weeks.

One of the stars of the UP Yoddha squad, Nitin Tomar, is also the highest paid player of the season. No wonder then all eyes will be on Tomar in a squad brimming with promise.

“It is a fresh start for all of us. But in the past few weeks we have bonded so well that it has felt like we have been together for a few years. I have not had such a focused build-up ever to a season,” said Nitin Tomar.

Tata Motors Limited, a USD 42 billion organisation, is a leading global automobile manufacturer of cars, utility vehicles, buses, trucks and defence vehicles. As India’s largest automobile company and part of the USD 100 billion Tata group, Tata Motors has operations in the UK, South Korea, Thailand, South Africa, and Indonesia through a strong global network of 76 subsidiary and associate companies, including Jaguar Land Rover in the UK and Tata Daewoo in South Korea. In India, Tata Motors has an industrial joint venture with Fiat. Engaged in engineering and automotive solutions, with a focus on future-readiness and a pipeline of tech-enabled products, Tata Motors is India’s market leader in commercial vehicles and among the top in passenger vehicles with 9 million vehicles on Indian roads. The company’s innovation efforts are focused on developing auto technologies that are sustainable as well as suited. With design and R&D centres located in India, the UK, Italy and Korea, Tata Motors strives to pioneer new products that fire the imagination of GenNext customers. Abroad, Tata cars, buses, and trucks are being marketed in Europe, Africa, the Middle East, South Asia, South East Asia, South America, Australia, CIS, and Russia.

In order to provide an added facility of car finance to its customers, Tata Motors has entered into an understanding with State Bank of Patiala for financing its full range of passenger vehicles. State Bank […]

Tata Motors to increase prices of its Passenger Vehicles up to INR 25,000 per vehicle from January 2018

Mumbai, December 11, 2017: Tata Motors today announced that the Company would be increasing prices of its entire passenger vehicles range by up to INR. 25,000, starting January 2018. This increase in price is due to […]

Partnership between two companies makes it easier for drivers to become micro-entrepreneur Further to the Tata Group’s association with Uber technologies, Tata Motors today, has successfully delivered first 50 cars under the ‘Tata Offer’ to […]