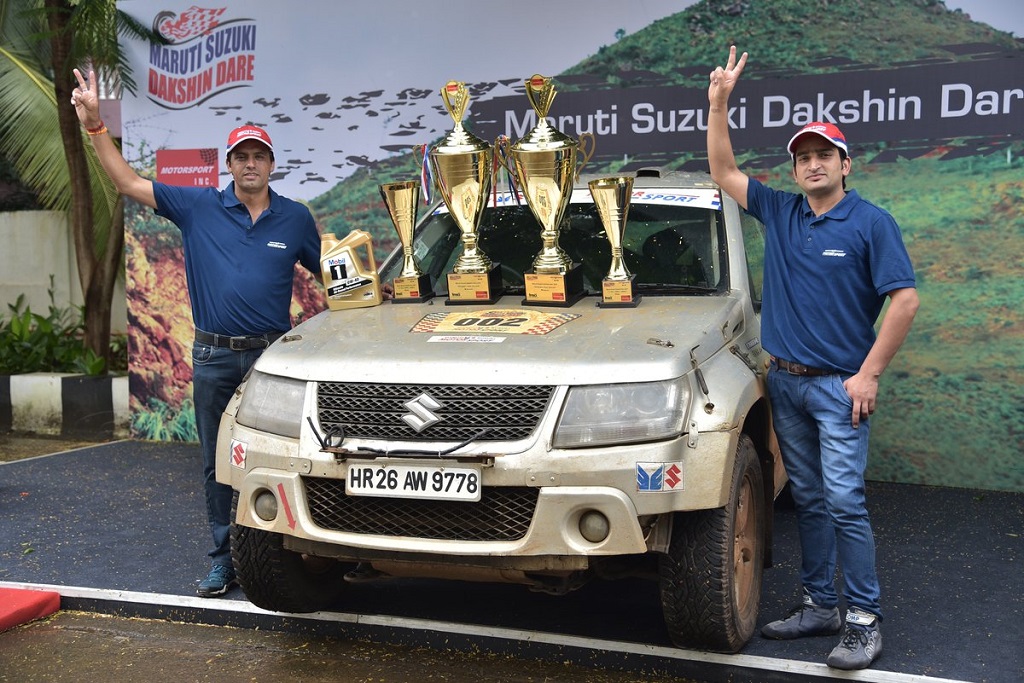 The journey of 2,200 kms traversing through scenic, undulating terrains of South India at the 8th edition of Maruti Suzuki Dakshin Dare concluded in a grand finale in Goa on Saturday. Suresh Rana and co-driver Parminder Thakur driving their Grand Vitara won the Ultimate Cars category and Ganesh Moorthy & T Nagarajan leaded in the Endurance Cars category.

T Natraj had a big-win in the Ultimate Bikes category covering the distance in his TVS Apache.

The six-day event was flagged off from Bengaluru last Sunday, with the off-roads of Coorg, Shimoga and Goa acting tough on the participants. The challenges were braved by 190 participants, highest ever in the history of Maruti Suzuki Dakshin Dare, with their set of techniques and skill.

Mr. Vinay Pant, Assistant Vice President, Marketing, Maruti Suzuki India Limited, said, “Maruti Suzuki Dakshin Dare has grown tremendously over the years, gaining a very strong foothold in motorsport in South India. Record breaking participation numbers with longest rally route are certainly in agreement to the claims. We are elated to see exceeding female participation in our rallies as well, which also serves our purpose of reaching and influencing a larger audience each year.”

The rally witnessed participation from 16 women motor enthusiasts. Bani Yadav along with her navigator Pankaj Rai driving from the Ultimate Cars category leaded among women participants, with a 9th position overall.

Speaking on the glorious win, nine-times Raid De Himalaya winner – Suresh Rana said, “We have won with a lead of just 00:06:06, which shows the high level competency witnessed at this year’s Dakshin Dare. It’s not just about the vehicle anymore, but about presence of mind and driving styles. Sustaining the lead throughout stages is taxing. It’s our first win at Dakshin Dare and we hope the winning streak remains in the forthcoming editions as well.”

In the Ultimate bikes category, Febin Jose in his TVS Apache stood second, giving a tough competition to Nataraj. The third place was followed by Akash Aithal riding his Royal Enfield 500.

The winners were recognised at the ceremony amidst much fanfare, with a vision to keep the motorsport flag rising high.

To set up Safety Circles for greater employee participation  Gurgaon, March 04, 2016: Maruti Suzuki India Limited (MSIL) renewed its pledge for Zero accident at all its facilities on National Safety Day today. To encourage […]