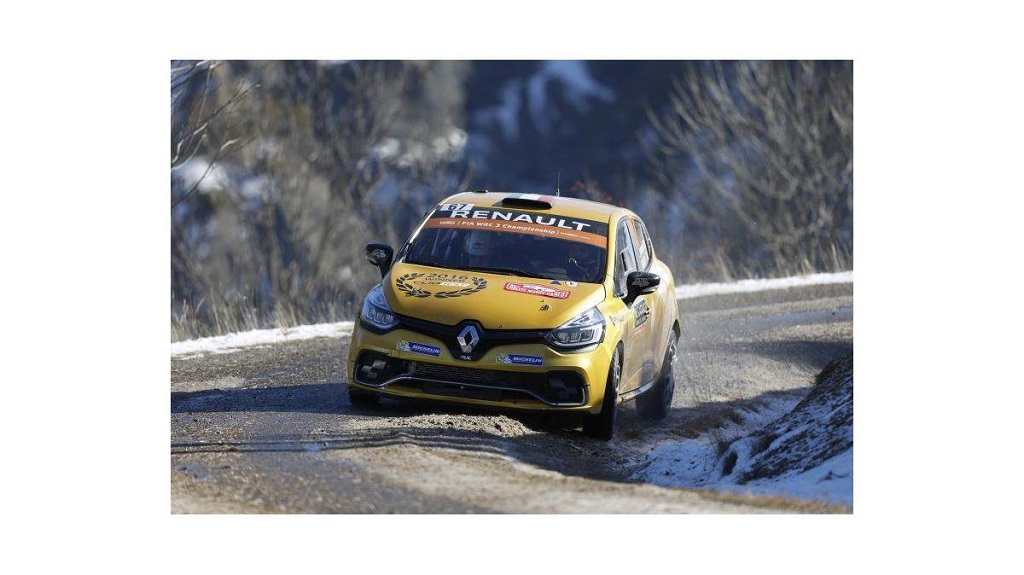 This year’s Rallye Monte-Carlo proved to be particularly competitive for the Clio R3Ts entered by the Renault Sport Racing Team. Ultimately, consistency prevailed as Luca Panzani, winner of the Clio R3T Italia Trophy, ended the rally in front, finishing as runner-up in the WRC 3 and winning the R3 class. He finished ahead of Charles Martin (France) and Surhayen Pernia (Iberia), whilst Cédric Althaus (Alps) was forced to retire on Saturday’s final stage.

Rewarded for their successful 2016 season by the chance to contest the Rallye Monte-Carlo in the WRC 3, the four winners of the Clio R3T Trophy enjoyed an intense week in the south of France. Having started on Monday with recce, the rally ended on Sunday in the Principality of Monaco after a breathtaking race in the French Alps. As is often the case, tyre choice proved to be critical but difficult in the varying, changeable and demanding conditions. The crews had the full gamut, with icy, snow-covered, wet and dry roads!

Charles Martin was unfortunate on the first stage contested, picking up a puncture that cost him four minutes. Cédric Althaus grabbed the early lead in the field of Clio R3Ts, before Surhayen Pernia took over at the front on Friday. Luca Panzani then moved ahead on the final stage of the second leg, a lead he would not relinquish. Charles Martin, having found good pace again, tried everything to make up ground on the Italian, but fell short by less than forty seconds. In Monaco, Luca Panzani claimed first place among the Renault Sport Racing Team drivers, ahead of Charles Martin and Surhayen Pernia, whilst Cédric Althaus retired on Saturday evening. The Clio R3Ts finished 2nd, 3rd and 4th in the WRC 3, whilst dominating the R3 class. The Renault Sport Racing Team is leading the WRC3 teams’ standing.

Sylvain Alanore, Team Manager, Renault Sport Racing Team: “We’re pleased with the result of this Rallye Monte-Carlo, which confirms the reliability of Clio R3T and the performance of the winners of our 2016 trophies. They adapted very quickly to their new environment at what is a very difficult event. With such tough road conditions, they showed they were up to the challenge; it was a real driver’s rally. Luca’s consistency and his ability to keep out of trouble paid dividends. Charles had a puncture, but after finding the right set-up, he finished the rally very strongly. Surhayen showed some good speed too, whilst Cédric’s minor error of judgement proved very costly. The four drivers were relatively closely matched in terms of performance, proving that standards are high in the Clio R3T trophies. They were all honoured to have competed on behalf of Renault Sport.”

Luca Panzani (winner of the Clio R3T Italia Trophy/2nd in the WRC 3): “It has been a magical week. I still can’t quite believe that I competed at the Rallye Monte-Carlo, in a works car, and managed to finish first! Sometimes, I felt like I was going to wake up. It was a difficult race, but along with Federico, my co-driver, we tried to find the best compromise. We had a lot of support from Renault Sport and we learned about working in a works team. It has been a wonderful experience for us. I would like to thank all my supporters, as well as Renault Sport, thanks to which – through the trophy – I have been able to get to this level.”

Charles Martin (winner of the Clio R3T France Trophy/3rd in the WRC 3):  “It was a long rally but in the end, it was a bit short for us; we just needed a few more kilometres. We didn’t have the right tyres on the first stage and the puncture lost us quite a lot of time. Despite the conditions, in keeping with some of the most iconic Rallye Monte-Carlo, we were able gradually to close the gap. But we had started too far behind to complete the job. Although I feel a little bit frustrated, I’m pleased with the performance level we showed at the end, as well as the work done with Matthieu Duval, my co-driver, and Cédric Robert, my ice crew driver. I would like to thank Renault Sport for this superb opportunity to take part in the Rallye Monte-Carlo.”

Surhayen Pernia (winner of the Clio R3T Iberia Trophy/4th in the WRC 3): “I would like to thank Renault Sport Racing, for everything they have done this week in order to provide us with the best possible conditions. It was an exceptional experience; finishing third among the Clio R3Ts and fourth in the WRC 3 is just rewards for last season’s efforts.”

Cédric Althaus (winner of the Clio R3T Alps Trophy): “It has been a magnificent week and it was a tough rally. I’ve never experienced conditions like these at this event. I wasn’t expecting to go off on this stage; we lost grip on a dirty section, in the same place as Neuville. In terms of performance, we drove well on Friday, almost matching the times of Charles. I would like to extend my heartfelt thanks to the guys at Renault Sport Racing, who provided us with incredible support during this rally.”

After the Rallye Monte-Carlo, the season continues in the coming weeks for Renault Sport Racing, with the opening rounds of this year’s Clio R3T trophies.

40 years ago: double victory for the ŠKODA 130 RS on the Rallye Monte Carlo