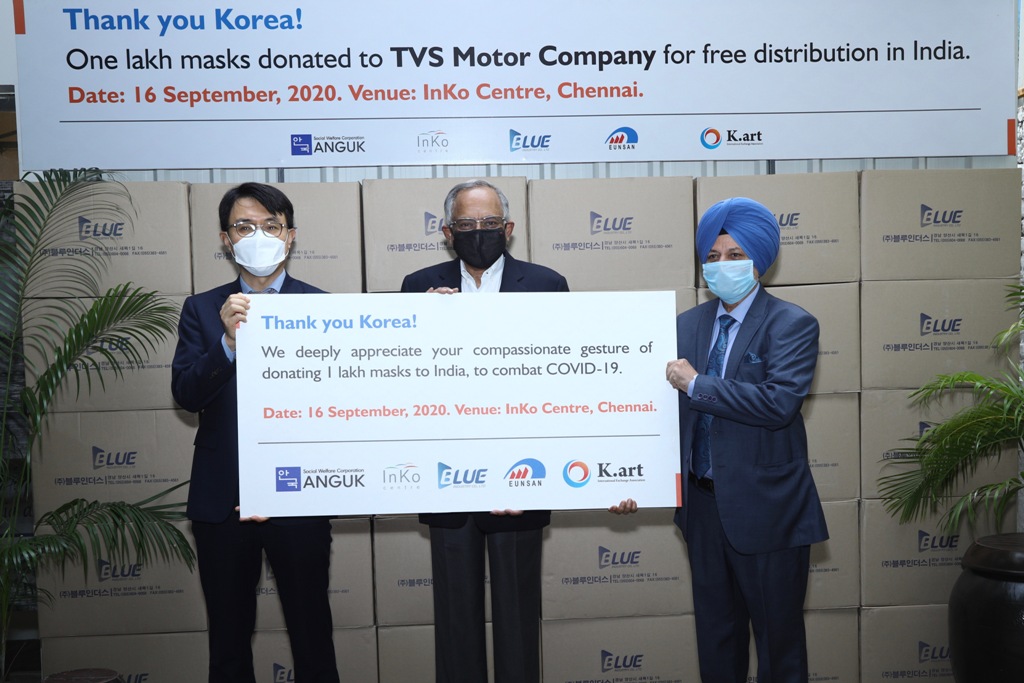 September 16, 2020, Chennai: Social Welfare Corporation Anguk Zen Center in South Korea, headed by the Venerable Abbot, Subul Sunim, in an exceptional gesture of humanitarian support and solidarity between the two nations, donated one lakh health masks for free distribution to aid India’s fight against the COVID-19 pandemic.  The donation was coordinated by K-Art International Exchange Association in Korea and InKo Centre in India.

Mr. Venu Srinivasan Chairman, TVS Motor Company & Managing Trustee, Srinivasan Services Trust said, “I would like to extend my sincere gratitude and deepest appreciation to the Venerable Abbot, my revered teacher, Subul Sunim for this compassionate gesture of donating 1 Lakh masks to InKo Centre. We welcome what is indeed a most timely and valuable donation in these challenging times, when wearing masks, following strict rules of sanitation and hygiene and maintaining social distancing is the ‘new normal’.  We will ensure that the masks are widely distributed to local communities across the country through the Srinivasan Services Trust, the social service arm of TVS Motor Company.  This unique civilian gesture of goodwill and support from Busan to Chennai truly epitomizes the warmth and depth of the valued relationship between the two nations.”

Mr Young-seup Kwon, Consul General of the Republic of Korea in Chennai, said “The global pandemic is by far one of the most serious challenges humanity has ever faced. We can overcome this challenge by staying strong and working together.  This cooperation at this civil society level clearly shows how much ordinary Koreans and Indians care for each other and we can overcome this challenge by standing together.”

About the Anguk Zen Center

The Anguk Zen Center in Korea, headed by the Venerable Abbot, Subul Sunim, is a social welfare corporation founded in 2014, which runs a Support Center for Abused Children as its core programme. The Center donates baby clothes and supplies to communal living facilities, multicultural facilities, single mother facilities and regional child centers in Korea in partnership with Zero to Seven, a company that specializes in childcare. The Center also supports babies in foreign countries, including Nepal, Mongolia and North Korea.

About the special relationship with India

InKo Centre aims to promote an inter-cultural dialogue by facilitating a consistent programme that draws on the rich traditions of both India and Korea. With a focus on language, culture and information, the Centre examines the global dimensions of such a dialogue while showcasing the local and national characteristics that underpin such exchange.

InKo Centre is a registered, non-profit society supported primarily by TVS Motor Company Limited and Hyundai Motor India Limited; the Korean Association in Chennai and a host of Indian and Korean companies based in Chennai. The Centre works in close co-operation with the Embassy of the Republic of Korea, New Delhi; the Korean Cultural Centre, New Delhi and the Consulate General of the Republic of Korea in Chennai. Since its inception in 2006, the Centre has worked consistently with key organizations in Korea and in India, with an aim to build long-term sustainable intercultural partnerships

Key features include class-leading 17.63 PS power, increased torque and reduction in motorcycle’s weight at current prices Hosur, March 10 2021: TVS Motor Company, a reputed manufacturer of two-wheelers and three-wheelers in the world, introduced the […]