The number of initial quality problems reported by two-wheeler owners in India has declined by a significant 14 problems per 100 vehicles (-14 PP100), driven primarily by a reduction in engine-related problems, according to the J.D. Power 2016 India Two-Wheeler Initial Quality (2WIQS) StudySM released today.

The study measures problems owners experience with their new two-wheeler during the first two to six months of ownership. It examines 138 problem symptoms covering seven categories (listed in order of frequency of reported problems): engine; brakes; fit and finish; lights/ electricals; ride and handling; transmission; and gauges and controls. All problems are summarized as the number of problems per 100 vehicles (PP100). Lower PP100 scores indicate a lower rate of problem incidence and therefore higher initial quality.

“Given the high incidence of pillion riding in India, core vehicle systems such as engine and brakes undergo a lot of stress. Therefore, it is imperative for OEMs to focus on these key systems to help enhance owners’ perceptions of vehicle quality,” said Mohit Arora, executive director at J.D. Power, Singapore. “With increasing competition and the frequent launch of new models, sustained quality under such adverse usage conditions can be a key differentiator.”

The study finds that the number of initial quality problems is influenced by the incidence of pillion riding. This is reflected in the finding that the 54% of two-wheeler owners who normally ride with a pillion report 156 PP100, compared with 145 PP100 reported by the owners who normally ride solo. The increase in reported problems is particularly notable in the engine, brakes and ride and handling categories.

“One-third of the two-wheeler owners ride more than 40 kilometers every day. Given this high usage, coupled with the driving conditions in India, it would be prudent for OEMs to focus on ensuring a trouble free vehicle,” said Kaustav Roy, director at J.D. Power, Singapore. “Providing customers with a high quality and dependable vehicle can improve satisfaction and the likelihood to build a strong brand reputation.”

Following are some of the key findings of this year’s study.

For Scooters, TVS Wego and Yamaha Alpha (72 PP100) tie for the highest rank among executive models.

The 2016 India Two-Wheeler Initial Quality Study (2WIQS) is based on evaluations from 9,329 vehicle owners who purchased a new vehicle between March 2015 and October 2015. The study includes 87 two-wheeler models from 10 makes. The study was fielded from September 2015 to December 2015 in 44 cities across India. 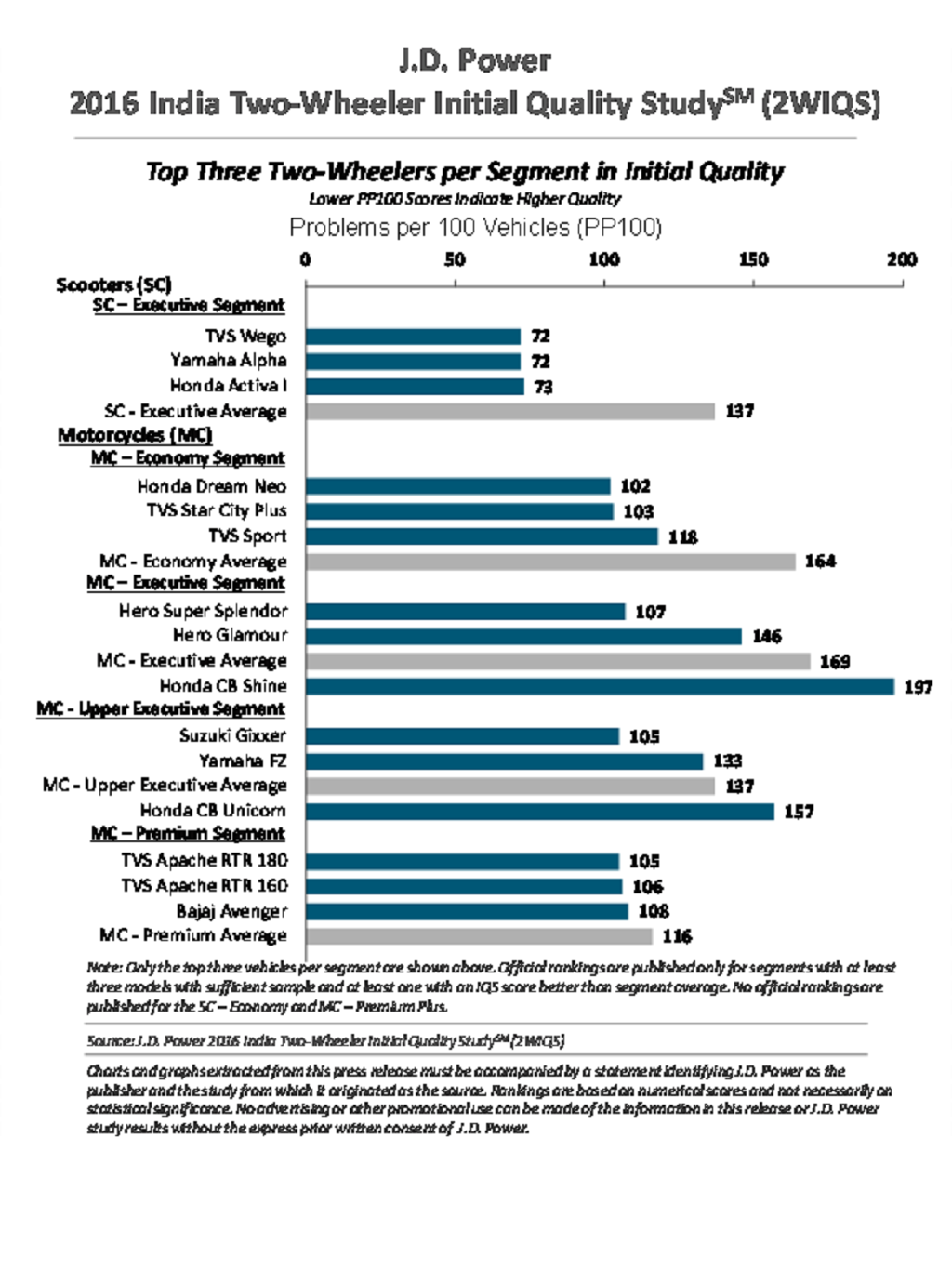