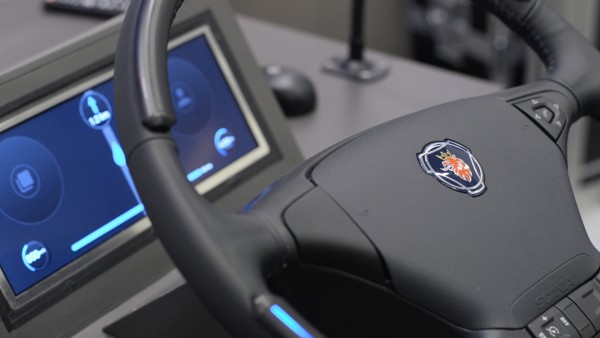 On the face of it, the International Conference on Robotics and Automation in Stockholm is not the most obvious place for Scania to be exhibiting.

But according to Senior Engineer Soheil Salehpour, the driver platform which has been showcasing one of Scania’s Automated Transport Solutions is “a perfect example of how robotics work in real life.”Putting you in the driver’s seat

The exhibit at the Scania stand gives you the chance to get in the driver’s seat and feel what it’s like to have a virtual co-driver, a technology that can share driving intentions and actions with other road users, as well as you the driver.

“The driving platform is a system for the driver where the vehicle can realise whether it’s in manual or automatic mode and respond according to that,” says Salehpour.He explains that the steering wheel acts as the primary source of communication to the instruments, heads-up display and mobile devices. The virtual co-driver allows you to switch between manual control and trusting in the automation with your hands off the wheel. There are even controlled handover situations and a safe stop ‘autopilot deactivation’, where the machine warns you ten minutes before it deactivates, before finally coming to a stop in a safe place at the side of the road.Future driver attracts interest from future talent

Could this be the truly mobile driver of the future? Scania thinks so, and there were more than a few visitors to the exhibition stand who seemed to agree.“People wanted to try it, they wanted to test it and then they started to talk to us about autonomous driving and robotics, too,” says Salehpour. And visitors to the Scania stand could also see a video of the Sweden to Denmark leg of the recent European Truck Platooning Challenge, another important facet of Automated Transport Solutions.

Perhaps some of those saying hello to Soheil and team are future members of the Scania family. Which brings us to what Salehpour says is the other reason for Scania’s presence at ICRA 2016.“We want to recruit researchers, too. I actually talked with several talented researchers that were interested in applying their methods in our company.”

Global dairy giant Arla has an extensive logistics operation within Sweden, allowing for the direct distribution of its dairy products. The company is already meeting its 2020 target of reducing CO2 by 25%, and this […]

Once again Iran is about to become one of Scania´s biggest and most important markets. Last year about 990 trucks and 860 buses were delivered to Iranian customers in great need of modern, new vehicles. […]