A new innovation partnership between Sweden and Germany is being launched today during Chancellor Angela Merkel’s visit to Sweden. The partnership includes mobility and electrical roads, areas where Scania’s innovations are already being put to the test.

The joint announcement by Swedish Prime Minister Stefan Löfven and Chancellor Merkel of “Innovation and Cooperation for a Sustainable Future” aims to strengthen the two nations’ sustainability, economic and technological competitiveness, and covers four areas, including mobility and electrical roads.

A key focus of the cooperation between the two countries will be the development of electrified road technology, work that has already been started by Scania in cooperation with its German counterpart Siemens. 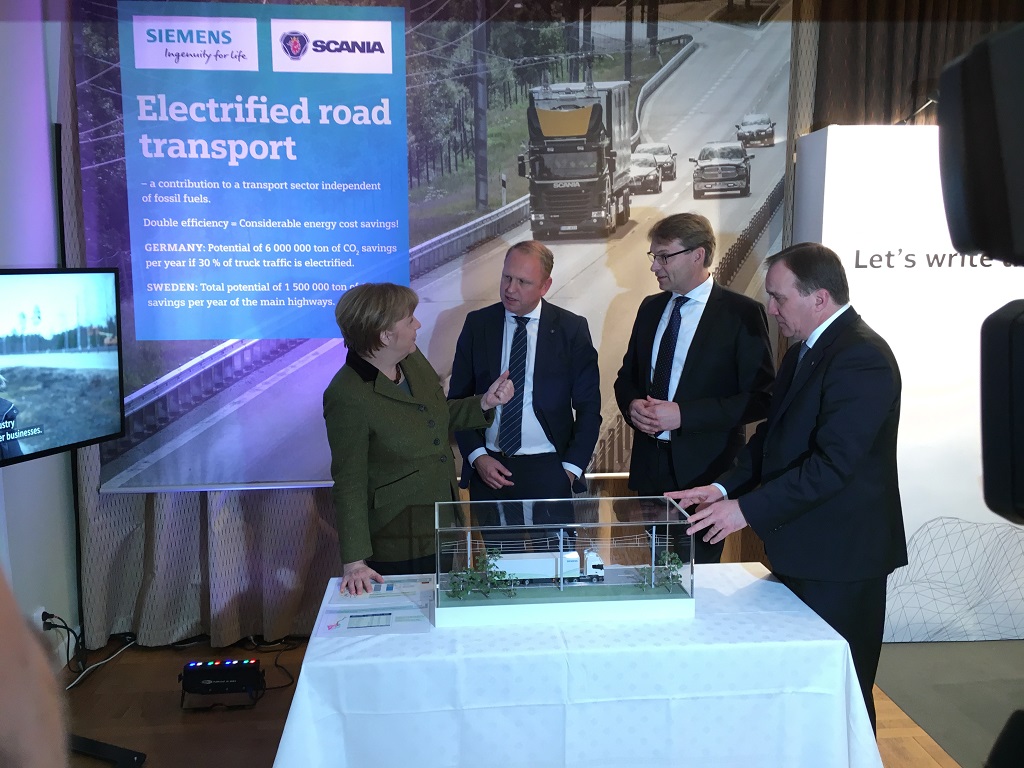 The two governments’ announcement aims to strengthen the cooperation on development, and applying technology that is already available, while also strengthening the two nations’ ability to compete with others in offering the best sustainability solutions as the world’s needs continue to change rapidly.

The two-kilometre stretch of the E16 highway is run by the Region Gävleborg close to Sandviken and the city of Gävle, and is the result of partnerships between various public and private sector entities in Sweden and Germany.
Scania, which is a part of German-based group Volkswagen Truck & Bus GmbH, thinks that electrified roads represent one important part of a future sustainable transport system, and the company is now ready to take the next step from field test to real commercial implementation.

“It’s an honour to be able to explain Scania’s work on the electric road to Chancellor Merkel. The agreement between Sweden and Germany underlines the value of strategic partnerships in creating solutions for a future of sustainable transport, something to which Scania is fully committed,” says Scania’s President and CEO Henrik Henriksson.

“I very much welcome the partnership and study that will be the first step of it, where Scania is happy to contribute with the experience we have gained together with our partners Siemens and the Region Gävleborg in running our hybrid trucks on the electrified road E16 outside Gävle.”

Scania’s new generation of trucks has been subjected to extreme stresses on Brazil’s expansive sugar cane fields over two years. The goal of the advanced field tests has been to understand where limits lie – […]

From global agreement to global action

Scania was present and ready to take action at COP22. During the conference the company also took the opportunity to join another global sustainability initiative – Below50. Last week the UN Climate Change Conference 2016, […]

A giant silver unicorn towed by a Scania V8 made for an extraordinary spectacle at the annual Reykjavik Pride parade. Iceland’s prince of pop and gay icon Páll Óskar has made it to a tradition […]