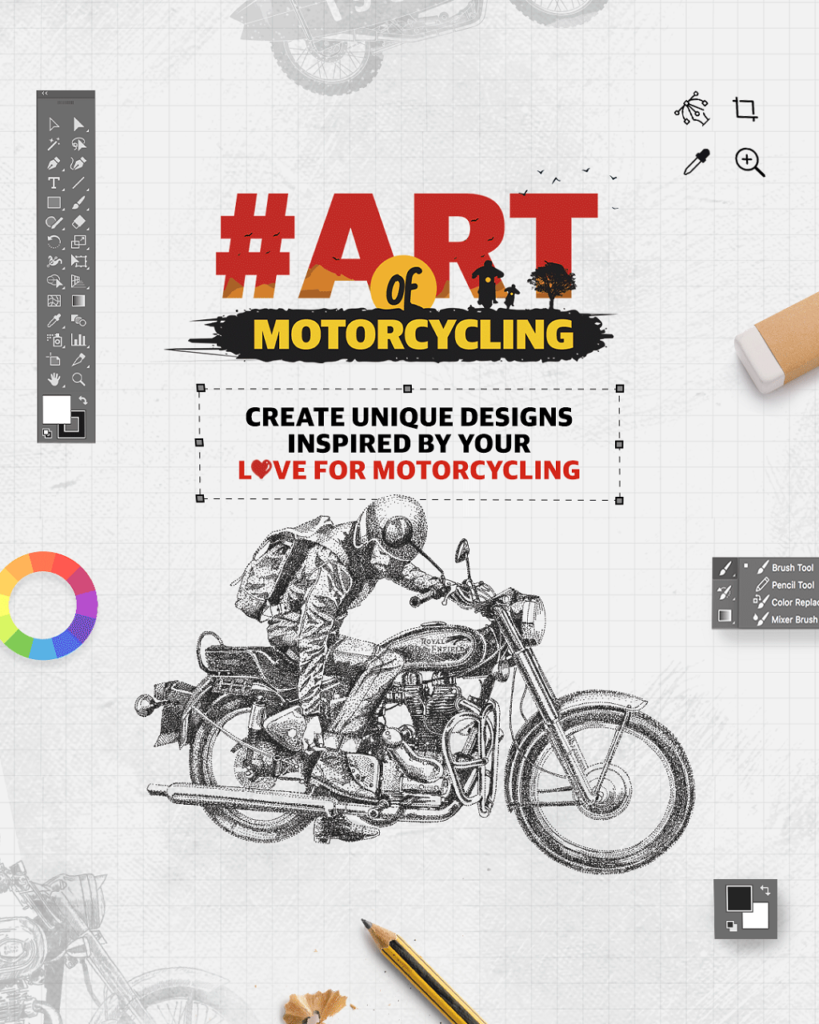 ~Campaign received more than 10,500 entries across the country~

New Delhi, October 20, 2020: Royal Enfield, the global leader in the mid-size motorcycle segment, has concluded the first edition of its designing platform – ArtofMotorcycling. While the brand is a symbol of exploration and self-expression, moments and journey captured by our riders, with ‘ArtofMotorcycling’, Royal Enfield decided to celebrate the beauty of riding through the eyes of its audience. The initiative is a great platform for everyone to come together and collaborate by creating new designs and sharing it with the world, with or without professional skills.

The campaign – with an enviable jury panel, including – Gary Inman, Nandita Abraham, Toria Jaymes and Maxwell Paternoster was initiated to fuel creativity amongst artists, creators, and motorcycling enthusiasts by giving them a canvas to express their love for motorcycling. The campaign received a phenomenal response of more than 10,500 entries from across India, out of which, five entries have been handpicked by the judges as winners .

The idea behind this campaign was to elevate the riding culture and encourage people to ride more and ride pure. Royal Enfield had conceptualized this annual competition to provide young riders/creators a platform to express their love for motorcycling through creative illustrations. The winners will get an opportunity to be a part of the brand in their artistic journey.

The month-long campaign has received a remarkable response and has resulted in bringing together a diverse set of audiences from different cities along with the Royal Enfield community – ranging from avid riders and aspirants to artists, illustrators, and graphic designers under a common umbrella. A total of 10,500+ registrations were received, out of which, 40% were from Tier I towns while 60% of them were from Tier II and Tier III towns.

Royal Enfield as a brand has always had the community at the heart of all of its engagement initiatives. Speaking about the campaign and about the brand’s association with art, Shubhranshu Singh, Global Head of Marketing, Royal Enfield, said, “Royal Enfield is a brand that has remained relevant to generations of motorcycle riders and its association with popular culture has been deep-rooted. We have been associated with art for several years now. We celebrate user generated content and want to create impact in the cultural mainstream. This campaign was a blank canvas for people to express their love for motorcycling and has seen a phenomenal response. We are very excited to note that we have got equally strong participation from all across the country, particularly from the smaller towns and we are keen to keep this engagement going in the future as well”

After going through all the entries, the esteemed jury finalized Pallab Baruah, Karan Verma, Chetan Patil, Manvendra Singh’s and Niharika Shrivastava’s designs. Niharika’s artwork was chosen via a poll that was undertaken on Royal Enfield’s Instagram page wherein her design was chosen as the Riders Choice Design. Further to that, the brand will also soon announce the opportunity to intern alongside the apparel team at Royal Enfield. Designs/illustrations of the winners will get featured and printed on the official Royal Enfield merchandise, and will get a sum of INR 30,000 each. Aged 21-36, the diverse set of five winners are from across the country – Lucknow, Mumbai, New Delhi, Indore, and Bangalore.

Speaking on the success of the campaign, Mr. Puneet Sood, Head – Apparel Business, Royal Enfield said, “ArtofMotorcycling has served as a creative platform for young creators and motorcycling enthusiasts, giving them an opportunity to express their love for ‘the motorcycling way of life’. Art and motorcycling are effective mediums through which cultural differences are erased, geographical barriers are removed and connections among people are born. This platform has laid out a pedestal for many looking beyond age, profession, and geography. The art that has come out of ArtofMotorcycling is surely going to inspire many more to take up motorcycling.”

Royal Enfield has always engaged with artists over the years and supported art projects, celebrating the ethos of exploration and motorcycling through the lens of various art forms. In essence, ArtofMotorcycling is a platform conceptualized to pay homage to Royal Enfield’s relentless quest for design perfection and celebrates dreams, passion, and determination of young creators, inspiring people along the way. Given how phenomenal the response has been, enthusiasts can rest assured that there’s going to be something bigger and better next year. Until then,  keep a lookout for the products with the winning designs, they should be live soon on the RE Apparel website.

As part of its ongoing journey to empower the motorcycling enthusiasts and elevate the riding culture, Royal Enfield conceptualized a challenge that provides young riders/creators a platform to share creative illustrations and stand a chance to work with the company.

·         Gary Inman – Editor and co-founder of the self-published motorcycling magazine ‘Sideburn’, Gary Inman is a London-based motorcycling enthusiast who covers personal riding stories. Since the magazine’s conception, his work has found its niche and an ardent following.

·         Nandita Abraham – As the CEO of Pearl Academy, Nandita Abraham is the woman who put the institute on the world map for fashion and design education. Her varied industry experience will bring more than just worth to the jury desk.

·         Toria Jaymes – A designer and illustrator with a huge range of experience working with brands such as Nike, RedBull, and the likes, Toria is the founder of Stay-Outside Studio as well as the Art Director for Gary Inman’s ‘Sideburn’ magazine.

·         Max Paternoster – Maxwell, or ‘Max’, is a renowned moto-artist based in London. With experience varying from designing h helmets and motorcycle body paintwork, to creating art inspired by famous motorcycling adventures, he brings a lot to the jury desk.

Started in 2014, the Royal Enfield Apparel division was conceived with a single aim – to create an ecosystem around pure motorcycling and enhance the motorcycling experience. Safety is the prime consideration for Apparel, with three important parameters – protection, comfort, and style. It strengthens the Pure Motorcycling way of life and allows emerging aspirants and existing loyalists to express themselves with the brand in numerous new ways. Relevance and being accessible for the end-user are the other key attributes that Royal Enfield considers. Our apparel range consists of lifestyle apparel and protective gear.

Powered by a ground-up new engine – LS 410 Extremely versatile – designed to be your only motorcycle https://drive.google.com/folderview?id=0By5C-dHJJN7HSUJ5eW83NXRDOVk&usp=sharing Royal Enfield, the fastest growing motorcycle brand in the world, today introduced the Himalayan—a motorcycle purpose-built […]

Royal Enfield’s Scramble returns with its second edition in Punjab

~ After a successful first edition in Shimla, Scramble, Royal Enfield’s competitive team event is back and will be held from August 23 -27th 2017 in Ropar, Punjab ~ Registrations now open at https://royalenfield.com/scramble/punjab/  ~ […]