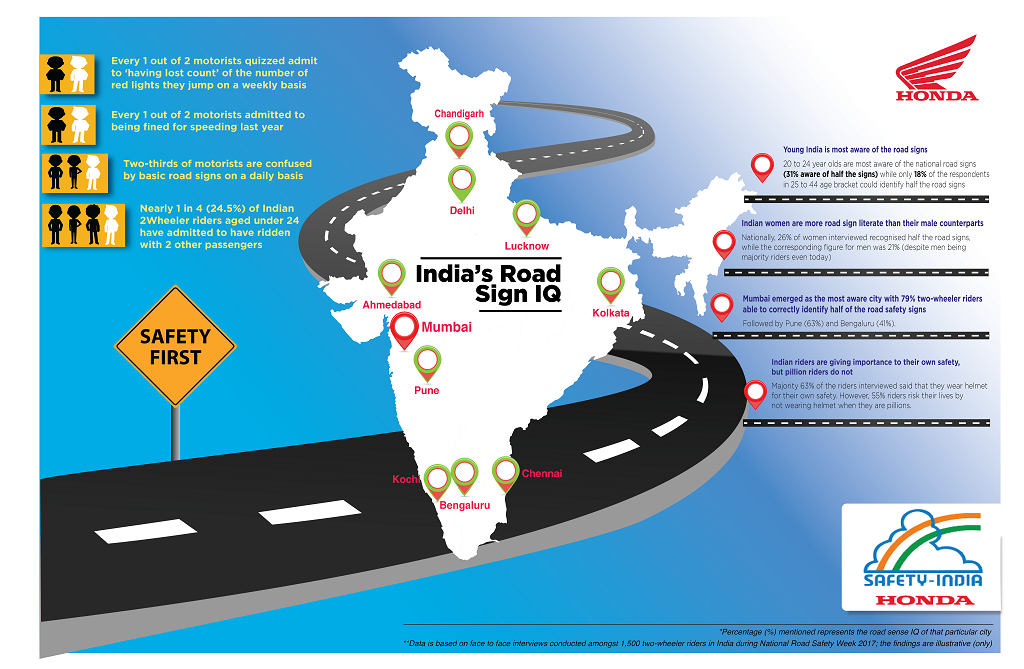 Survey shows 78% of Indian 2Wheeler riders do not recognise even half the road signs!

According to the ‘Honda 2Wheelers Road Sign IQ survey’:

Elaborating on the survey findings and Honda’s efforts in the direction of road safety promotion, Mr. Yadvinder Singh Guleria, Senior Vice President – Sales and Marketing, Honda Motorcycle & Scooter India Pvt. Ltd. said “Two-wheelers account of the highest fatalities (31.5%) due to road accidents in the country. With a new two-wheeler coming on Indian roads every 2 seconds, ‘Safety for Everyone’ is Honda’s priority as a responsible corporate. Honda Road Sign IQ survey re-affirms that there is an urgent need to invest in behavioral change in Indian mindsets through road safety education. We have already educated over 10 lac people on road safety in India at Honda’s 11 adopted traffic parks across India. A sizable 38% of these are kids as Honda aims to mould youth of today into responsible road users of tomorrow.  Post this survey, Honda is committed to intensifying its road safety initiatives with special focus on children and empowering women who are the conscience keepers of every family.”

Reinforcing its commitment to the promotion of road-safety, Honda engaged over 24,000 people children and females in 250 cities across India. Supporting Honda in this celebration were various stakeholders of the society including Defense personnel, Corporates, schools, several State police departments and NGOs etc.

Many unique engagements across India included an awareness rallies in multiple cities where in more than 850 customers spread the message of safe riding on their Honda motorcycles and scooters; awareness walkathons in Delhi and Bhubaneswar; helmet awareness rally for pillion riders in Delhi. Additionally, Honda’s safety instructors helped close to 7600 riders improve their risk prediction ability on roads with the riding simulators during the National Road Safety week.

“The Goods and Services Tax (GST) is definitely one of the most important tax reform in the history of India which was closely tracked by each and every one this monsoon session of Parliament. The […]

Honda is now preferred choice of more than 28 million Indians

28 million happy customers in 15 years of operations in India NAVI crosses 50,000 units mark in six months of availability Consolidates market share to 26% and a growth of 24% Celebrating the 28 […]