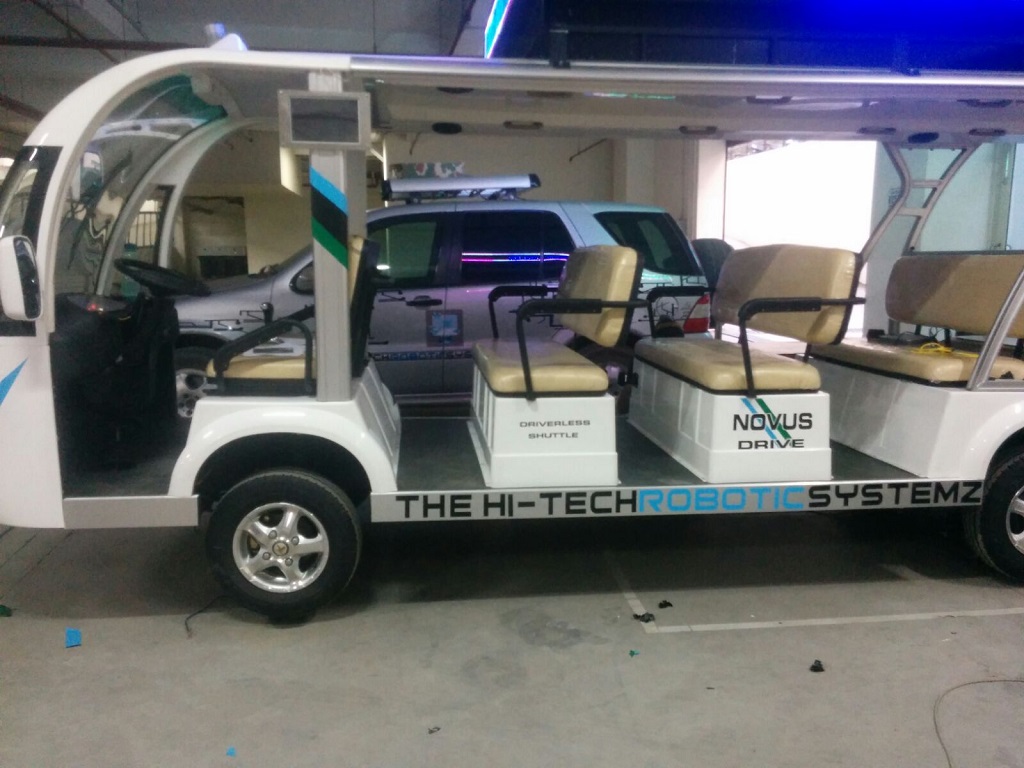 New Delhi: Minister of Road Transport and Highways Nitin Gadkari witnessed the driverless operation of Novus-Drive at the Auto Expo, Greater Noida. He lauded the The Hi-Tech Robotic Systemz Ltd team for developing the Driverless vehicle and wished them luck for future endeavours. At the Auto Expo the home-grown Automated Guided Vehicle (AGV) manufactured by THRSL is on ferrying visitors from one pavillion to other. Novus-Drive is the first driverless shuttle in the country. The vehicle has the capacity to seat 14 people, it can autonomously navigate on its own with its high fidelity sensors and robust algorithms  for path planning and navigation. The vehicle is indigenously manufactured at the THRSL’s Gurgaon facility. It’s a complete made in India product with all its research and development having taken place in Gurgaon.

Among other features a feature which makes it a favourite is its battery run mechanism i.e. the vehicle is 100% environment friendly and runs 150 kilometers per charge.  The safety features include autonomous emergency braking.  It uses 3d lidars, GPS/INS and stereo vision cameras for its external world perception and is controlled with deeply integrated drive by wire system.The user can enter the destination over a tablet mounted on the vehicle. Once the destination is entered the vehicle starts its journey. It reaches the destination without any hiccups, pausing and moving according to the direction and road congestion.

These vehicles have been manufactured mainly for commuting in controlled atmosphere and is best suited for Intra-university travel, large office campus, elderly health care communities, trade fair and theme parks along with the upcoming smart cities. The vehicle is a first of its kind manufactured in India.  ‘Make in India’ has been launched last year but those with an eye on future and the spirit to serve the nation always work towards achieving it. The Hi-Tech Robotic Systems Limited (THRSL) was founded in late 2004. THRSL is India’s first and pioneering company in the field of Intelligent systems, Mobile Robotics, Artificial Intelligence and Computer Vision. The Company has successfully developed and commercialized a wide range of robotic products catering to the needs of Defence, homeland security & Industrial Sectors.

A visibly pleased Nitin Gadkari, Minister of Road Transport and Highways said, ” I am delighted to witness this driver less vehicle. This vehicle is not only a made in India vehicle but it also addresses the environmental concerns. It gives me immense pleasure to see that the  young generation is involved in the R&D of this project, I wish them luck for their  future endeavor.

Talking about the success story of THRSL and the AGV, Mr. Anuj Kapuria, Director & CEO, The Hi-Tech Robotic Systemz Limited (THRSL) said, ‘I left my PHD midway to form this company in India, Robotics and automation were my passion and I chose them to be my profession. The AGV we have brought out is the first driver-less vehicle made in India and would revolutionize the transport in large campuses and townships. Its success will pave for more driver-less vehicles from us.”

9.    The user can enter the destination over a tablet mounted on the vehicle

Concept Meaning Marketing or advertising are the two main factors involved in the sales of any product, and this is what exactly happens at auto shows. An auto show is an event, usually spanning from […]

Electric Vehicles Are the Future of India- Nitin Gadkari