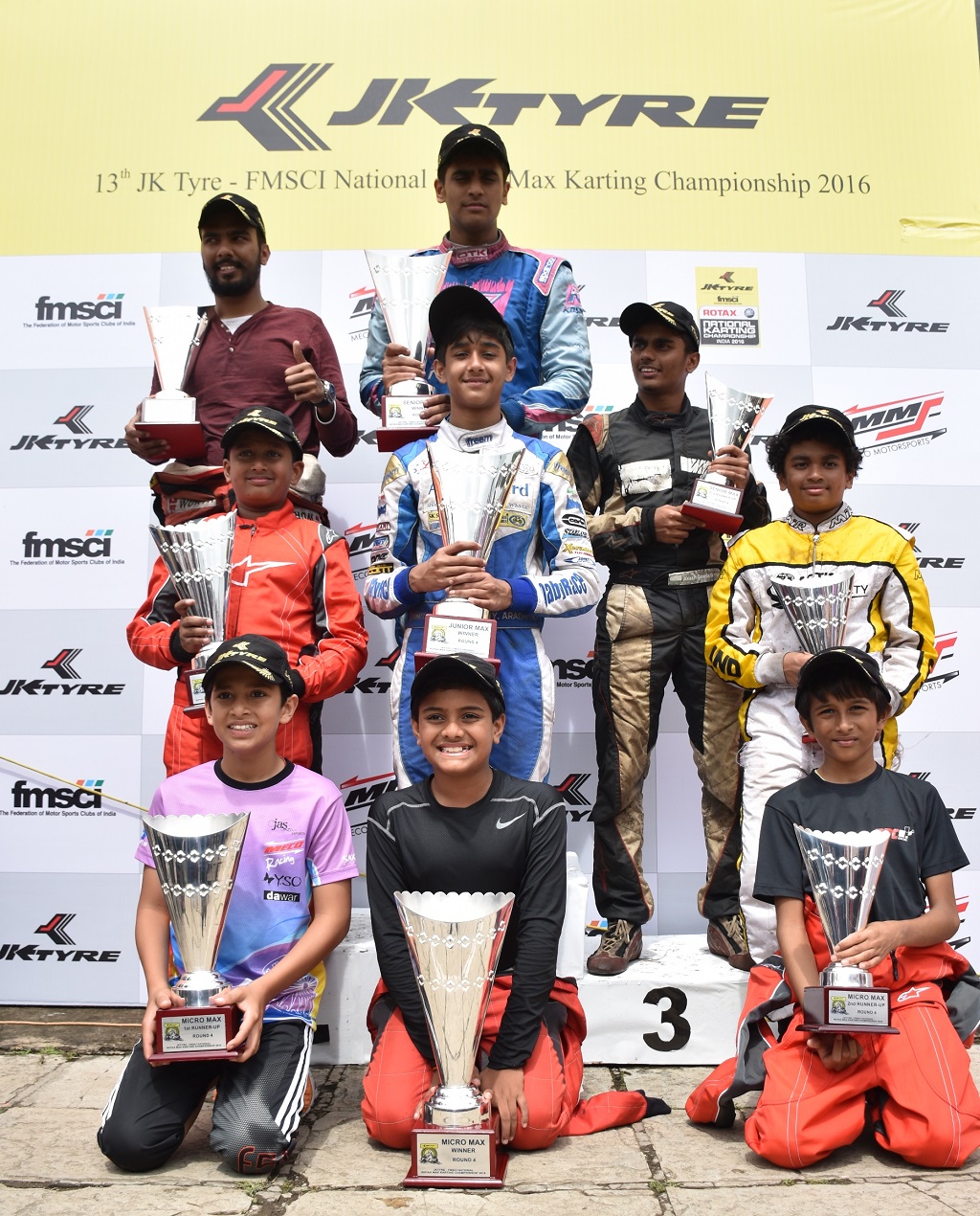 On a rain-hit Sunday, championship favourite Ricky Donison suffered a double blow that saw him surrender his leadership position after the fourth and penultimate round of the 13th JK Tyre FMSCI National Rotax Max Championship here at the Mohite Racing Academy.

Donison of BPC Racing, who had won all three earlier rounds, couldn’t come to terms with the wet and slippery conditions on the track and lost his edge in the Senior Max category. He zipped into the parcferme area in the scrutiny bay as he felt that he had a problem with his kart. 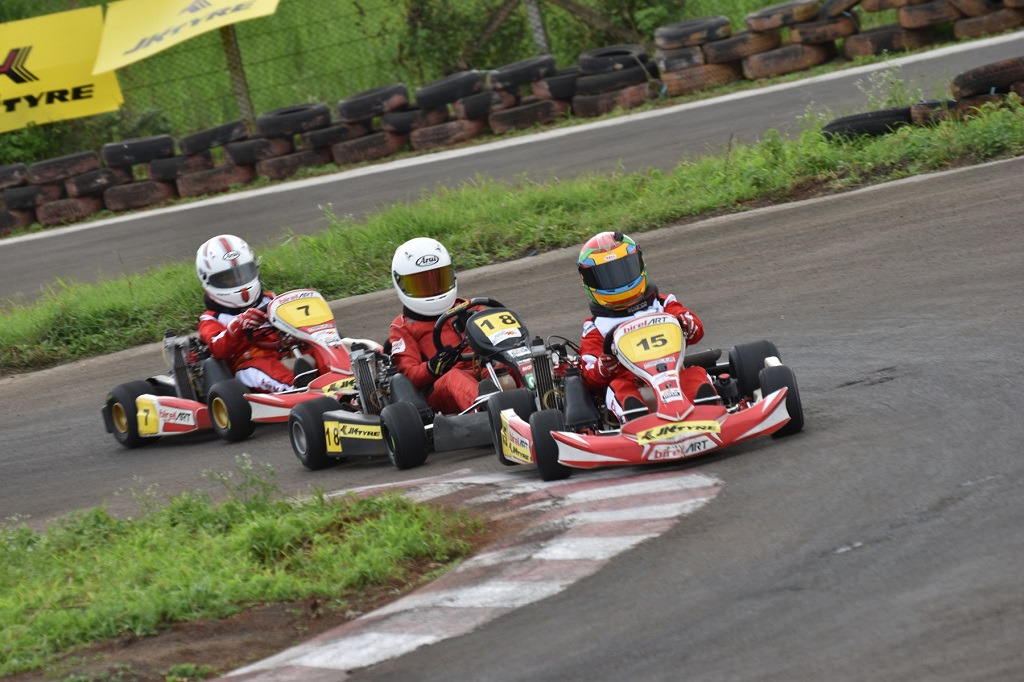 He came back a few minutes later to rejoin the race but by then the race organisers had removed his transponder, deeming him DNF (did not finish) on technical grounds. It meant that he had to be content with 38 points in the final that saw him slip to the second position with 324 overall points.

Chennai’s Vishnu Prasad jumped into the lead in the battle for the championship by finishing third in the pre-final and fourth in the final on an action-packed Sunday. He has a nominal 4-point lead now with 328 points in his bag, going into the final round next month.

The round itself was won by Mumbai’s Nayan Chatterjee (Meco Racing) in an exciting race.  Starting from the sixth place, he drove aggressively to come into contention in the opening lap itself. By the fifth, he was in the lead and didn’t give any other driver the opportunity to catch him. 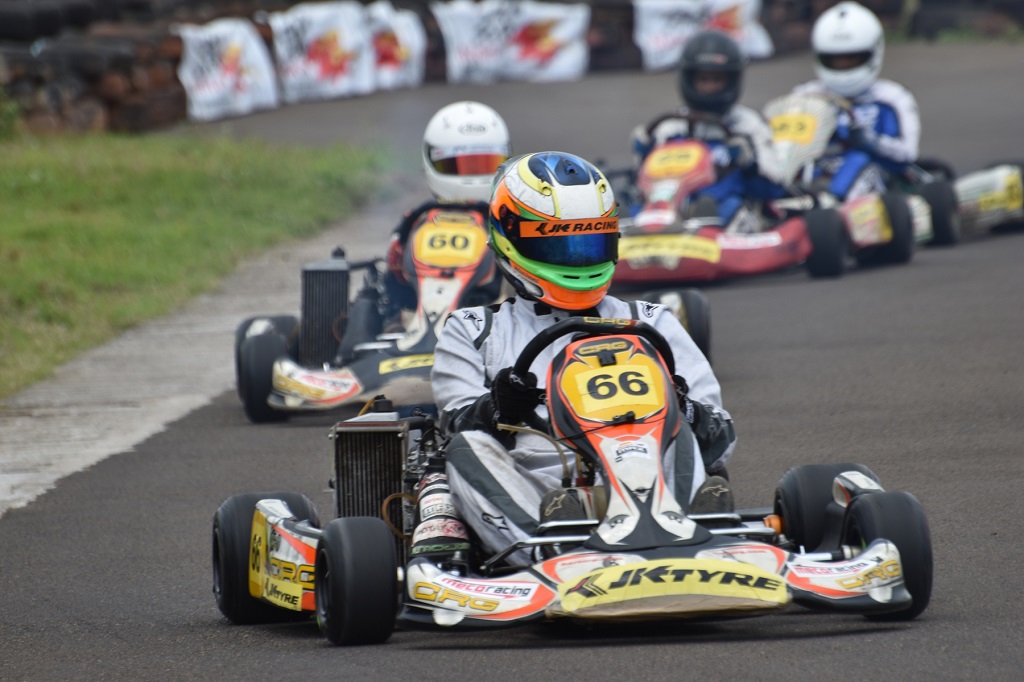 For a brief while, Kolhapur fans had something to cheer as Dhruv Mohite grabbed the lead. But he couldn’t handle the heat generated by Nayan and the rest and slowly fell behind and eventually pulled out in the 12th lap. But the crowds still had reason to celebrate as another local boy Chittesh Mandody surprised all by coming from behind to finish second. Akash Gowda of Meco finished a commendable third, having started from the pit lane.

Interestingly, the Junior Max and Micro Max categories too saw the current leaders, Manav Sharma and Shahan Ali, suffer defeats but that didn’t affect their positions on the championship table.

In Junior Max, Manav of Peregrine Racing only managed to finish sixth after struggling with technical problems with his kart all through the weekend. But that was enough to keep him ahead of the pack with 334 points.

Yash Aradhya of Meco won the round to climb one place up to second position with 328 points.

Chirag Ghorpade of BPC had a great weekend, winning the two heats on Saturday and the pre-final in the morning. But he fell behind in the race that mattered and finished second. He is now in the fourth place in the championship race with 317 points.

In Micro Max, Shahan Ali looked unbeatable till the rains came down. The 12-year-old from Agra preferred not to take any undue risk and couldn’t do anything as Arjun Nair (Meco Racing) sneaked past him in the opening lap itself.

Shahan waited for Arjun to make a mistake but that didn’t happen; he made a late charge, even clocking the quickest timing in the last and 15th lap but Arjun held on to his nerve and warded him off. Bangalore’s Arjun is now just 28 points behind the leader in the championship race.

The 19th JK Tyre FMSCI National Racing Championship got off to a flying start, with Krishnaraaj Mahadik pulling off a dramatic win in Race 2 of the Euro JK 16 category here at the Kary […]