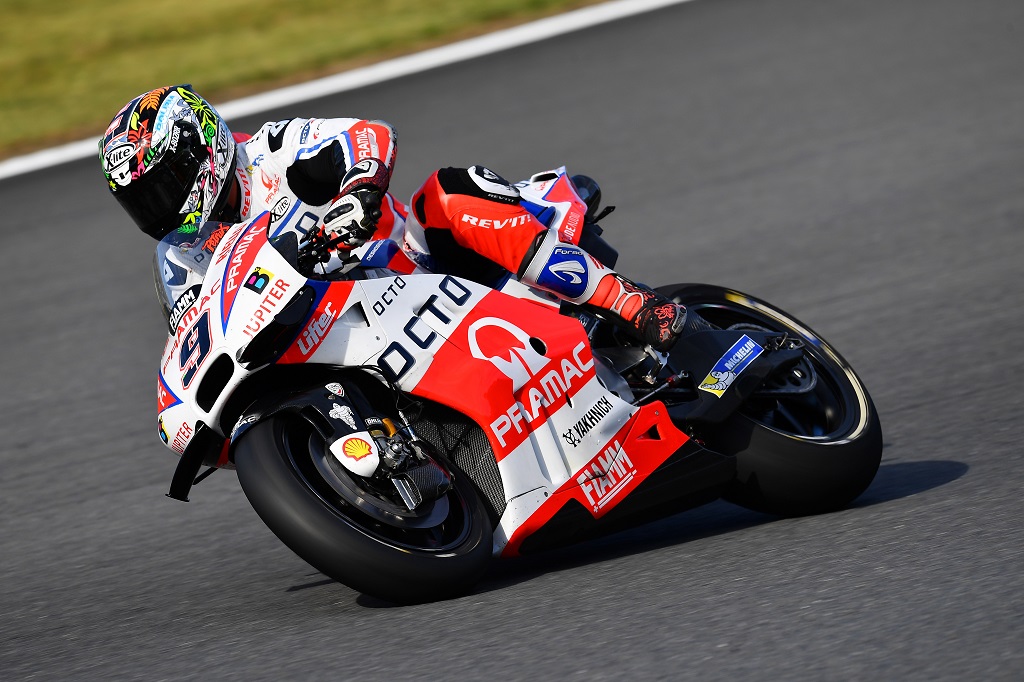 Starting from second on the grid, Marquez got the holeshot, but was passed in the first corner by Jorge Lorenzo (Movistar Yamaha MotoGP) and the former champion held first position for the next three laps. Marquez made a move on lap-four and regained the ascendency as he set consistently quick times, with the fastest lap of the race coming on the sixth circulation.  The 23-year-old Spaniard increased his lead as the race progressed and with his nearest rivals Valentino Rossi (Movistar Yamaha MotoGP) and Lorenzo both crashing out when pushing hard to catch the leader, Marquez held his nerve to take victory and secure his third MotoGP World Championship and the fifth world title of his Grand Prix career.

The battle for podium places was as intense as ever, with Rossi and Lorenzo involved in the fight before both fell, leaving Andrea Dovizioso (Ducati Team) in a perfect position to secure a well-deserved second place following a controlled race. The encounter behind was even more absorbing, as the combatants were from the same team, with Maverick Viñales (Team SUZUKI ECSTAR) just getting the honours ahead of his team-mate Aleix Espargaro (Team SUZUKI ECSTAR) to seal the final rostrum place. With all of the first four riders choosing the medium front and soft rear MICHELIN Power Slicks, fifth placed Cal Crutchlow (LCR Honda) chose a hard front, paired with the soft rear, as he raced his machine to the position of First Independent Team Rider and strengthen his position at the top of those standings. Pol Espargaro (Monster Yamaha Tech 3) took sixth, with Alvaro Bautista (Aprilia Racing Team Gresini) recording his best result of the season so far with seventh. The Ducati pair of Danilo Petrucci (OCTO Pramac Yakhnich) and Scott Redding (OCTO Pramac Yakhnich) took eighth and ninth respectively, with Stefan Bradl (Aprilia Racing Team Gresini) rounding out the top-ten.

A crowd of 52,216 watched from trackside and were bathed in warm, sunny weather as air temperatures reached 25°C, pushing track temperatures up to 37°C. They witnessed Marquez become the first Michelin motorcycle world champion since Nicky Hayden – also of the Repsol Honda Team – secured the title in 2006. Michelin will now head south as it travels to Phillip Island in Australia and round 16 of the championship, where the French tyre company will also be title sponsors for the event as the Michelin® Australian Motorcycle Grand Prix takes place on Sunday 23rd October.

“This race was difficult, because when you are fighting for the championship it is hard to keep the concentration. I started the race and I was convinced my rhythm was good on the Michelin tyres and I was pushing hard early on. Then when I saw ‘Valentino out’ on my pit-board I decided to go for the victory. Then when I saw ‘Lorenzo out’ the felling changed and I lost concentration a bit, but I then just couldn’t wait for the moment to cross the line and celebrate with the team. The tyres worked really well in the race, the front tyre temperature went up because conditions were different today and I was a little bit unsure how it would behave, but it worked really good. I want to say a big thanks to my Michelin technician Patrick, he has done a really good job all season and has helped me to understand the tyres we have used this year, so a big thanks to him because we are working really well together. It was quite difficult at the beginning of the season because I had ridden for a while on the same tyres and when you change it is hard to understand, but you must understand the potential and from Michelin it was really good. The rear tyre is amazing from Michelin and I am really happy to be the first champion with Michelin for many years and every time we go on-track we are learning many things and this year we did a great job.”

“Firstly I want to give my congratulations to Marc Marquez and the Repsol Honda Team on winning the rider’s championship today. Marc has ridden very intelligently this season, he has shown a great maturity and adapted to the Michelin tyres in many different conditions very well. So well done to all involved on behalf of everyone at Michelin.

“This weekend has been another learning curve for us and we will take away a lot of important lessons that we know we can act upon and rectify for the future. We were quite surprised by the cold track and the time it took our tyres to heat up during the practice sessions in Motegi, but we spoke with all riders and teams to explain the situation and this is something we will work on for here in 2017. We now head to Australia, which everyone knows is a real inspection of the performance of the tyres. We are up to the challenge as we had a positive test there earlier in the year and have produced a tyre especially for the circuit. It will also be great to be involved in the event because it is the Michelin® Australian Motorcycle Grand Prix and it will be important for us to give a good account at our own GP!”

Repsol Honda Team aiming to keep the momentum in Montmeló

MotoGP 2020 Round 9, Gran Premi de Catalunya ‎Spain, September 22, 2020: With the best result of his rookie season to date, Alex Marquez is aiming to carry the momentum home as Stefan Bradl rejoins him […]