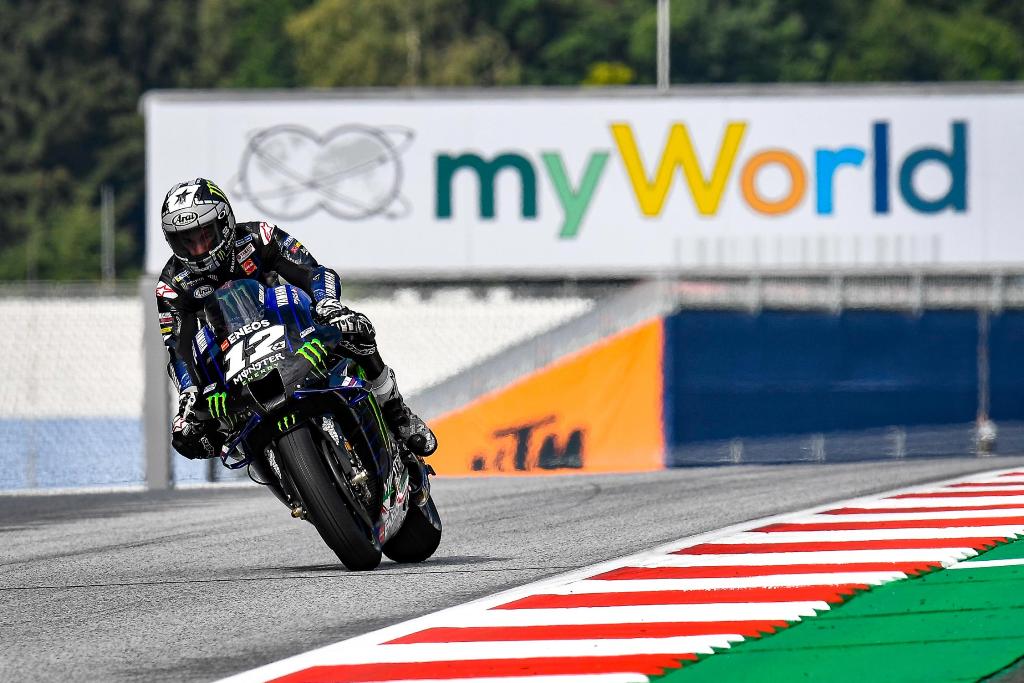 Spielberg (Austria), August 15, 2020— For the first time since the 2019 Australian Grand Prix, Maverick Viñales (Monster Energy Yamaha MotoGP) will line-up on pole position in MotoGP™ after coming out on top in a sensational Q2 session at the myWorld Austrian Grand Prix. A 1:23.450 saw the Spaniard beat Jack Miller (Pramac Racing) by 0.068, with Championship leader Fabio Quartararo (Petronas Yamaha SRT) 0.087 off as the entire top 12 were covered by half a second, the closest we’ve seen since 2007 – incredible.

Q2 kicked off and what a start it was. Viñales came out the blocks flying to set a lap time that pretty much matched Johann Zarco’s (Esponsorama Racing) fastest Q1 time, with Quartararo then taking over at the summit by a tenth. There were red sectors flashing up on the timing screens like a Christmas tree, with the field all bang on the money from the off. Miller went P3 before Miguel Oliveira (Red Bull KTM Tech3), Pol Espargaro (Red Bull KTM Factory Racing) and Joan Mir (Team Suzuki Ecstar) all exchanged provisional P3. But Miller then took it back, with Viñales displacing Quartararo at the top. 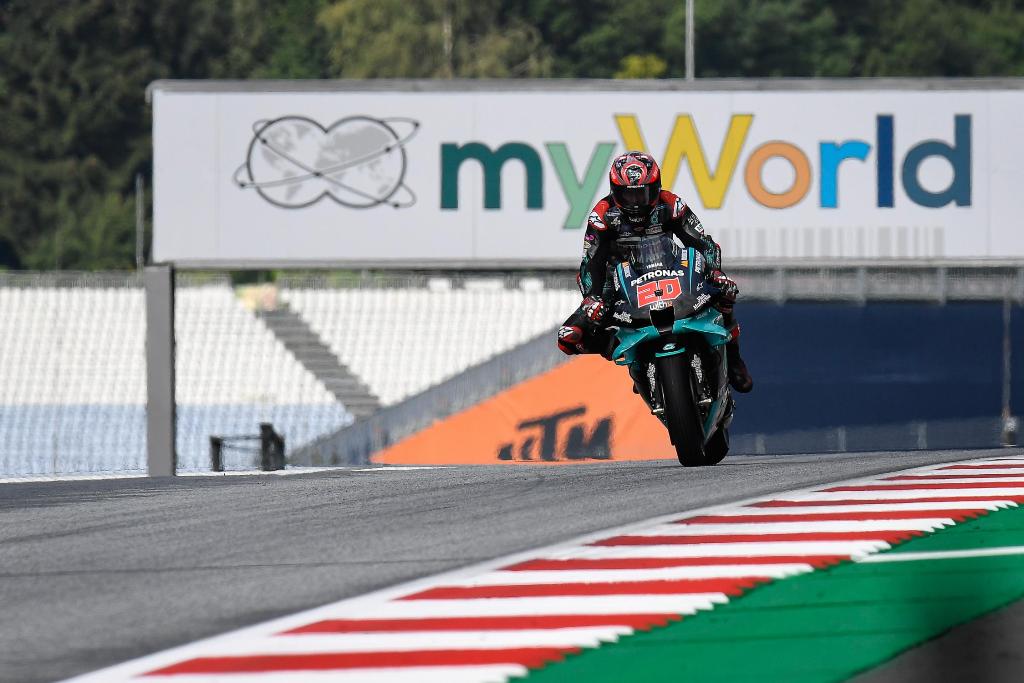 That lap for the factory Yamaha rider got scrapped, however, and it was Quartararo back in the driving seat. But Viñales went even quicker to set a 1:23.694 to take P1 again. Pol Espargaro then shot up to P5, just two tenths adrift, with Mir going third again. It was all kicking off in Q2, with Andrea Dovizioso (Ducati Team) slotting into P6. Quartararo then closed the gap to Viñales as the dust settled – briefly – as fresh rubber went in.

The hills were soon alive with the sound of fire breathing MotoGP™ machines though and the times were about to get even quicker. ‘Top Gun’ was again going great guns and Viñales improved his time again to move the goalposts, with Franco Morbidelli (Petronas Yamaha SRT) then going P3 to make it a Yamaha 1-2-3 in Austria – that’s something we haven’t said before. Dovizioso was about to show who was boss around the Red Bull Ring though, the Italian taking P1 away from Viñales despite losing time in Sector 3, but it was far from over. 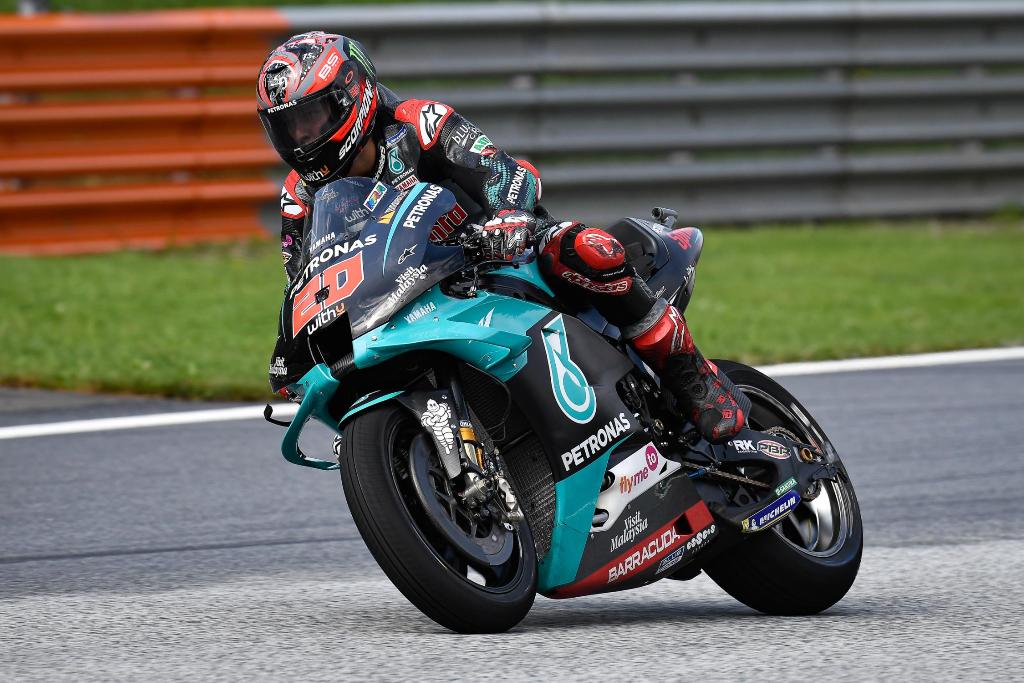 The 2017 and 2019 race winner didn’t stay at the top for long. Viñales, following Mir, went back to the top of the timesheets to go over a tenth clear of the field. Dovizioso was setting red sectors again though, Pol Espargaro also. The latter couldn’t hold his advantage around the second half of the lap and the KTM rider went P3, with Dovizioso again losing time in Sector 3. Could the number 04 regain the advantage like he’d done on the last lap in Sector 4? Not quite, Dovi – after getting shuffled down by Quartararo and Pol Espargaro – went P3 to displace the KTM rider to P4.

But we still weren’t done. Miller and Pol Espargaro were going for one last gung-ho lap to try and steal pole position from Viñales. And it looked like they could. Both riders were up in Sector 1 and Sector 2, but Espargaro lost time once more in Sector 3. Sector 4 didn’t go Espargaro’s way and he couldn’t improve, but Miller did. It wasn’t quite enough for pole but Miller went P2 to split Viñales and Quartararo, handing him his first front row start of the season. The Australian finds himself in a Yamaha sandwich on the front row, Viñales and Quartararo grabbing P1 and P3 on Saturday afternoon. 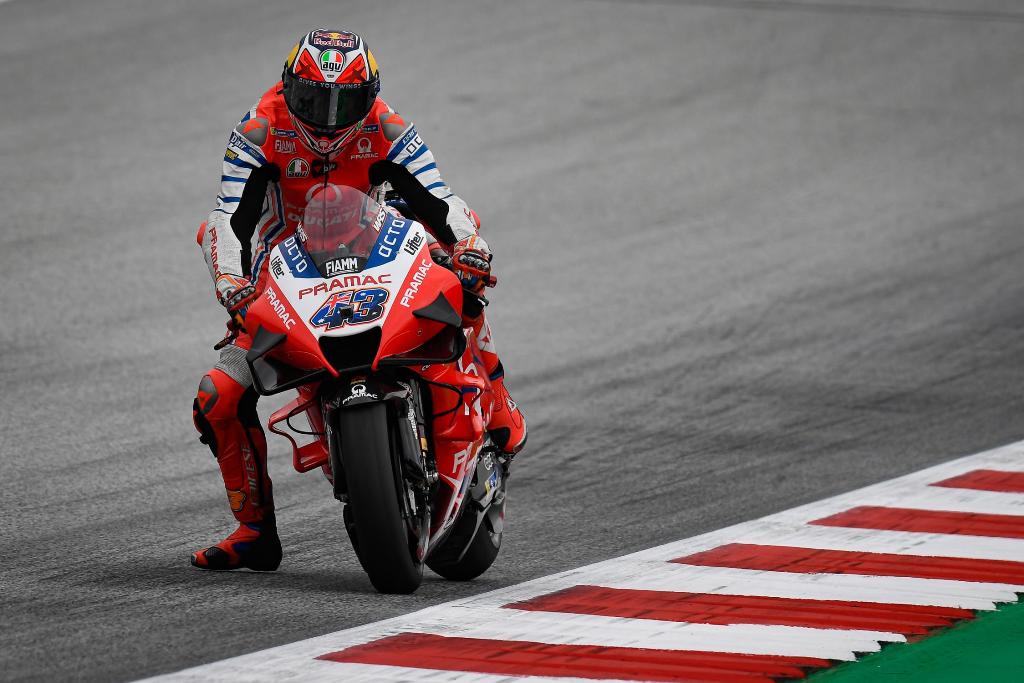 After the news broke that he won’t be continuing with Ducati beyond the 2020 campaign, Dovizioso will spearhead the second row of the grid after finishing just 0.156 from pole. Both he and KTM’s Pol Espargaro looked superior in FP4 and will be hoping they can bypass the likes of Viñales, Miller and Quartararo in the early stages. A dream pole or front row went begging for the number 44, but a P5 in qualifying is his best Saturday afternoon result of 2020, and Espargaro has a real chance to fight for the win on Sunday.

After looking strong all weekend, Mir joins Dovizioso and Espargaro on the second row in Austria. Mir was just 0.223 from pole position but finds himself on the outside of Row 2, proving just how competitive the field is. The Spaniard’s time in his second run was good enough to see Morbidelli miss out on a second row start by 0.046, the Italian starts 7th ahead of Alex Rins (Team Suzuki Ecstar). The latter also sits just two tenths away from pole, but has to settle for P8. 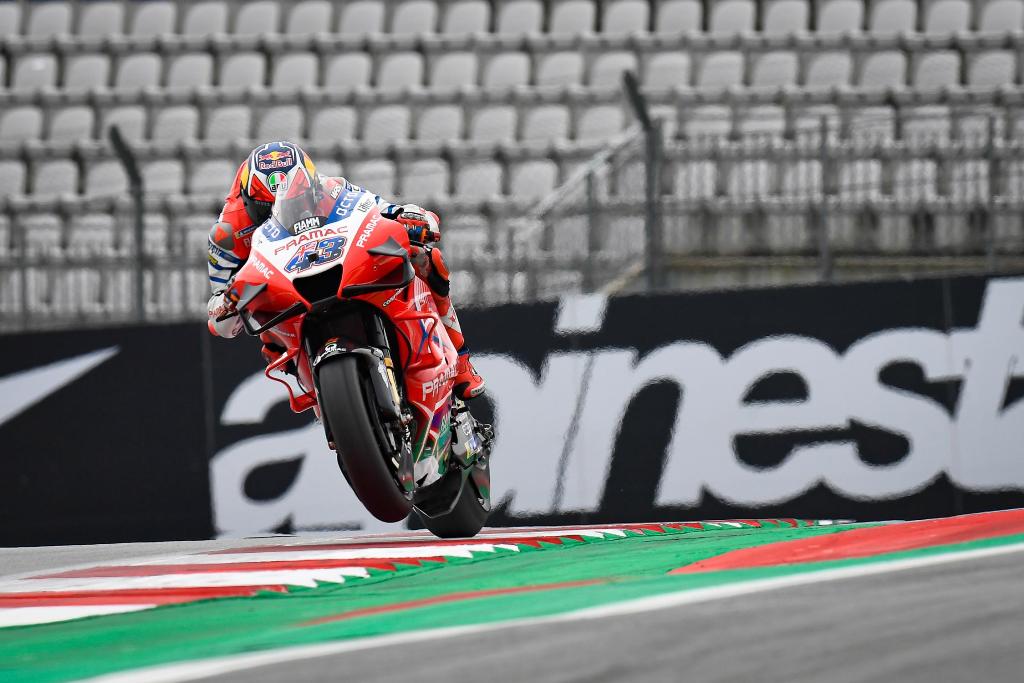 Zarco was fastest in Q1 and went quicker in Q2, but the Czech GP poleman will have more work to do on Sunday in Austria if he’s to grab a repeat podium finish. It’s ninth for the Frenchman, who finishes 0.044 ahead of Takaaki Nakagami (LCR Honda Idemitsu). Oliveira briefly owned a provisional front row place but will start 11th, just 0.489 from pole, with Q1 graduate Valentino Rossi (Monster Energy Yamaha MotoGP) ending Q2 in 12th despite finishing 0.545 off his teammate’s time.

How close do you like it? Half a second covering the Q2 field is ridiculously tight as we witness the closest qualifying top 12 in over a decade – and there’s more stories down the order. Czech GP winner Brad Binder (Red Bull KTM Factory Racing) will start 17th as the slowest KTM rider, with fellow rookie Iker Lecuona (Red Bull KTM Tech3) doing a sterling job to start P16. Row 5 is jam-packed with experience and speed with Danilo Petrucci (Ducati Team), Aleix Espargaro (Aprilia Racing Team Gresini) – who exchanged some words and hand gestures in Q1 – and Cal Crutchlow (LCR Honda Castrol) starting P13, P14 and P15 respectively. 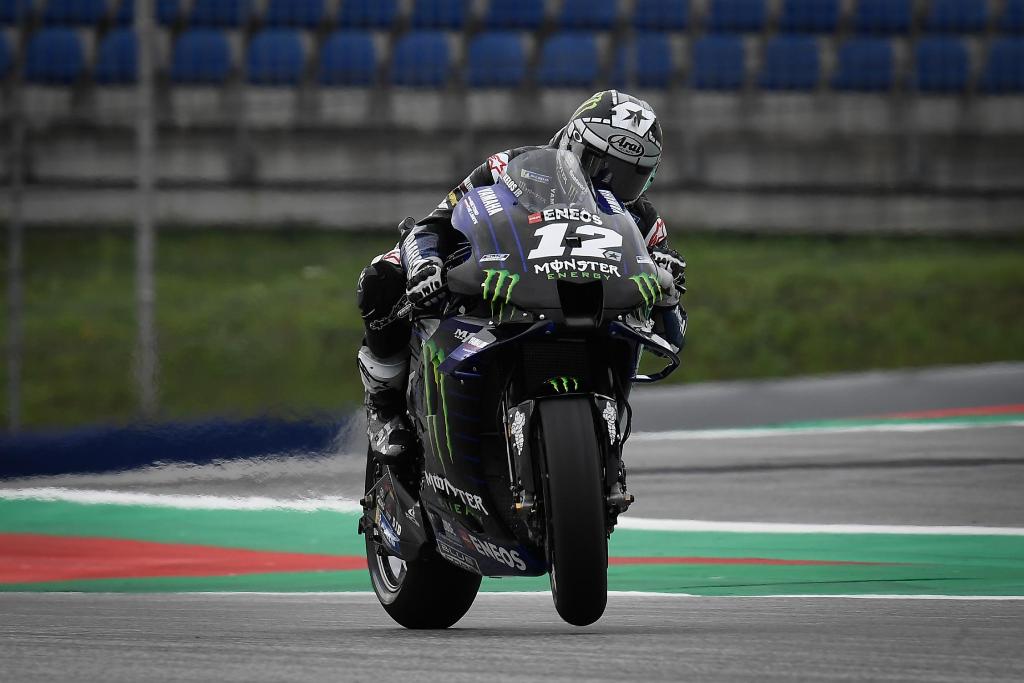 Got your breath back yet? All this means we’re set for a belting race. Viñales grabbed the bull by the horns on Saturday at the Red Bull Ring, but who will come out the fight on top on Sunday?

All the action from the main race day of MotoGP™ – myWorld  Motorrad Grand Prix von Österreich will be telecast LIVE on Eurosport and Eurosport HD from 2:15 PM IST onward.The race will also be streamed LIVE on Discovery Plus from 3:30 PM IST.

Eurosport is the number one sport destination in Europe, fuelling the passion of fans and connecting them with the greatest sports events in the world. As the Home of the Olympic Games in Europe, Eurosport delivered the ultimate Games experience for PyeongChang 2018 reaching both record linear and digital viewership across localized Eurosport services. Firmly established as the Home of Cycling, Grand Slam Tennis and Winter Sport, Eurosport channels – Eurosport 1, Eurosport 2 – reach 246 million cumulative subscribers across 75 countries in Europe, Asia Pacific, Africa and the Middle East. Eurosport.com is Europe’s No 1 online sports news website with an average of 30 million unique users per month and, along with the Eurosport app (available on iOS and Android), the only place to watch Eurosport anytime online, on mobile and on tablet devices. Eurosport Events specializes in the management and promotion of international sporting events. More information is available by visiting corporate.eurosport.com.

‘Discovery Plus’ is an exciting new D2C streaming app, launched to satiate the unmet need of a differentiated product offering premium real-life entertainment. Priced competitively with an introductory offer of INR 299 per annum, the app has been developed and curated specifically for India.  Discovery Plus offers thousands of hours of exclusive content across 40+ genres, including Science, Adventure, Food and Lifestyle, in 8 languages including Hindi, English, Tamil, Telugu, Malayalam, Kannada, Bengali & Marathi.  The premium subscribers have access to a large selection of never-seen-before Premium Discovery titles, must-watch documentaries, India originals and exclusive acquisitions. Free users of the app have access to all-time favorites from the Discovery library.