January 24, 2017, Ahmedabad: Mahindra Two Wheelers, part of the USD 17.8 billion Mahindra Group, successfully concluded it’s first-ever Mahindra MOJO ‘Desert Trail’. The Desert Trail was flagged off from Jaipur on December 17, 2016 and ended in Ahmedabad on December 25, 2016 completing a tough yet exotic ride. Riders from across the country were part of the trail that covered a total distance of over 2,500 kms.

The ‘MOJO Tribe’ rode through the tough terrains of North Western India and conquered the deserts across Jaipur & Rann of Kutch. Challenging their riding skills, the tribesmen experienced cold climes, while discovering the sandy terrains in tough conditions.

The Tribesmen explored some really spectacular routes and visited some of the most sought after destinations during this trail. They basked in the glory of sunrises and swirling sands along the sand dunes and sought solitude in the expanse of the white desert in Rann of Kutch. This mesmerizing trail was held across two legs from Jaipur to Bhuj and Bhuj to Ahmedabad. Along the way, the tribesmen spent two nights at the exotic Sam Sand Dunes, visited Jaisalmer fort and Longhewala War Museum and also paid tribute to the men in uniform who sacrificed their lives in the line of duty.

The tribe also visited the supposedly haunted village of Kuldhara before heading to Dhordo Tent City during the India’s biggest and vibrant White Desert Festival – Rannutsav. Before ending the Trail at Ahmedabad, the tribesmen covered Haji Pir Dargha, Mata No Madh, Koteshwar temple and Lakhpat fort and headed towards the north western coast to experience the serenity during sundown at Mandvi beach. 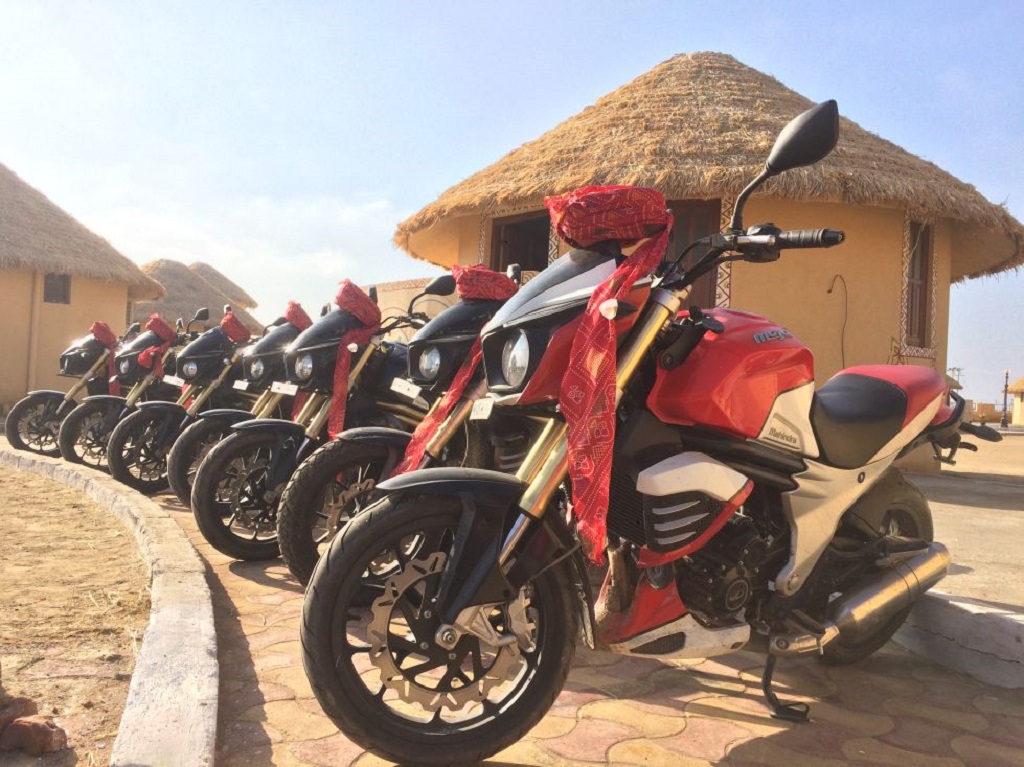 Naveen Malhotra, Sr. General Manager – Sales, Marketing & Product Planning, Mahindra Two Wheelers Ltd said, “With every trail, the MOJO’s brand philosophy of ‘Born For the Road’ is relived and increasingly strengthened amongst the tribesmen. The exotic routes and experiences during the Desert Trail embodies the joy of riding & brotherhood, just like our previous trails – The Jungle Trail, The Mountain Trail and The Coastal Trail. The MOJO is the perfect machine for every biker who is passionate about touring, and this trail further helped strengthen the bike’s reputation among Motorcycle travelers.

Route of the Desert Trail:

MOJO Tribe, a club meant exclusively for owners of MOJO motorcycle, aims to bring together a group of biker enthusiasts who navigate every turn to welcome the magic of possibility, the lure of freedom, the excitement of adventure, and the power of untold tales.

Mahindra Two Wheelers has also announced a new season of the Trails of MOJO Tribe 2016 – 17, which celebrates the spirit of riding through 4 thrilling trails, each promising a different terrain and experiences of lifetime. One could enjoy conquering new peaks on the Mountain Trail, chasing the winds on the Coastal Trail, exploring nature on the Jungle Trail or pushing oneself to the extreme on the Desert Trail. All these trails culminate into the MOJO Rising Trail, an annual get-together of MOJO owners at Nagpur, to share countless moments of exhilaration with fellow riders.