Gap narrows down to only 1% in terms of contribution to domestic two-wheeler industry (automatic scooters 35%, 110cc motorcycles 36%)

Honda consolidates leadership and leads the next scooterization wave!

Honda’s market share in automatic scooter segment is at ALL TIME HIGH of 63%. Honda has strengthened its undisputed leadership gaining 6.6% share on back of demand for new BS-IV portfolio. Leading this record sales is Activa, which is now India’s highest selling two-wheeler brand.

As a result, automatic scooter segment’s contribution to two-wheeler industry is now at 35%.

Sharing how Honda’s automatic scooter sales are driving the industry, Mr. Yadvinder Singh Guleria, Senior Vice President – Sales & Marketing, Honda Motorcycle & Scooter India Pvt. Ltd. (HMSI) said, “From its debut in 2001, Honda 2Wheelers India re-activated the automatic scooter segment. Over the years, Honda has strengthened its leadership in automatic scooter segment with its two core strengths – advance technology and innovation. Honda was the first to reduce the mileage gap between mass motorcycles and automatic scooters way back in 2001 and innovate with tuff-up tube, Convenient Lift up Mechanism (in 2001). In 2009, Honda was the first in industry to bring Combi-brake system (CBS) with Equalizer technology and tubeless tyres. In 2013, Honda innovated yet again to give customers more mileage with Honda Eco Technology. Continuing its technology and innovation leadership in the BS-IV era, Honda is again the industry first to bring LED position lamps in the segment with Activa 125. In 2016-17, Activa has overtaken motorcycles to become Highest selling two-wheeler brand in India. Honda is firmly leading the next wave of scooterization which has already started in Tier-II and tier-III towns.”

TREND TO WATCH => ATSC to overtake 110cc motorcycles as No. 1 contributor to Industry

With better road infrastructure and more females joining the work-force, the primary requirement of Indian riders has evolved from the mileage and price conscious 110cc motorcycles to the more convenient and unisex automatic scooters. Ending April 2017, the gap in segment contribution to industry volumes has narrowed down to only 1%.

In just 6 years, the contribution of automatic scooter segment to domestic industry has zoomed to 35% (April 2017) led by Honda 2Wheelers India while 110cc motorcycle segment contribution has declined from 49% to 36% in the same period. 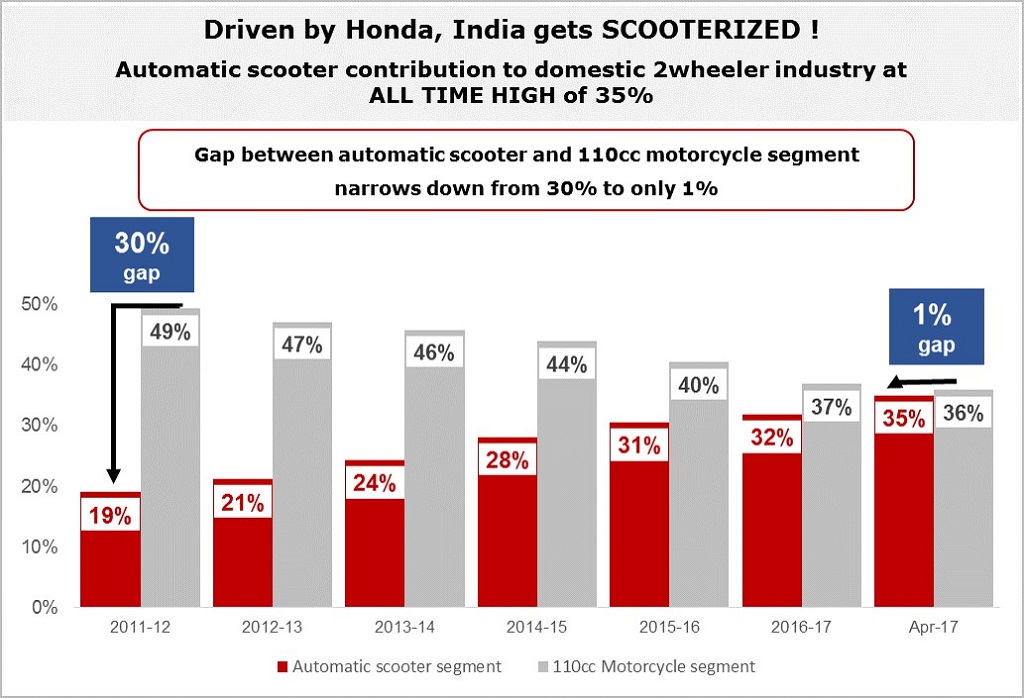